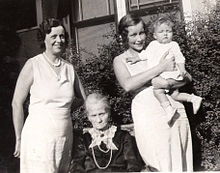 Four generations of mothers and daughters, 1931.

A daughter is a female offspring; a girl, woman, or female animal in relation to her parents. The male equivalent is a son. Analogously the name is used on several areas to show relations between groups or elements.[1]

The word daughter comes from the Old English dohtor, from Proto-Germanic *dochter, related to Dutch dochter and German Tochter, from Proto-Indo-European *dhugheter, shared by Sanskrit duhitar and Greek θυγάτηρ (thugatēr),[2] Mycenaean Greek tu-ka-te, written in Linear B syllabic script.[3] (Note: an asterisk before a word indicates that this is a reconstructed form, not an attested word.)

A daughter plant is an offspring grown out of a part of the plant, for example, from a cutting of a leaf.

The term can also refer to the subordinate in any relationship where the superior entity is referred to as mother, for example, a daughter ship. It may depend on time relations or on structure relations.