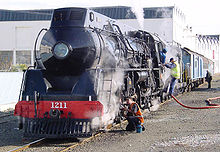 Mainline Steam is a New Zealand organisation devoted to the restoration and operation of historic New Zealand Railways mainline steam locomotives. Regular day excursions and multi-day tours are operated over rail lines throughout New Zealand. These excursions provide travellers with the unique opportunity to relive the days when steam was king while experiencing the magnificent New Zealand countryside. Excursions are operated by the Auckland, Wellington and Christchurch branches.

Mainline Steam began in 1988 based around the collection of steam locomotives that were privately owned by Mr Ian Welch, the first of which had begun operating on the main line. Depots sprang up in Christchurch and Auckland, and later Wellington. The Auckland depot, based in the old Parnell diesel depot became the organisation’s primary restoration base and most of Mainline Steam's currently active locomotives were restored there. The Wellington depot, located at Plimmerton, is a purpose-built building which replaced the formerly leased Upper Hutt goods shed and has become an important restoration base also. The depot in Christchurch is a former industrial building that used to be located at Studholme, relocated to land on the premises of CWF Hamilton.

Mainline Steam is notable for having imported a number of African steam locomotives from South Africa and Zimbabwe (including a GMAM Garratt), with some more South African and Zimbabwean steam locomotives still overseas. It has also imported former British Rail Mark 2 carriages for use on its steam-hauled excursions, and is in the process of overhauling them for NZ use – it currently relies on spare carriage stock being available from Tranz Scenic. The organisation regularly operates excursions out of Auckland and Christchurch, the latter operating excursions primarily along the highly scenic Midland Line. Mainline Steam also has a number of diesel and electric locomotives in its care.

Not all locomotives owned by Mainline Steam that are stored overseas are expected to be shipped to New Zealand.

Mainline Steam has a large collection of rolling stock, mostly consisting of tank wagons used for oil and water storage, some of which are main line certified. In addition Mainline Steam has twice purchased British Railway Mark 2 rolling stock and shipped it to New Zealand – first in 1997 (and on-sold to Tranz Rail shortly thereafter, after TranzRail informed Mainline Steam that they would not allowed the Mark two carriages to operate on the national network, no doubt to protect their own charter services), and in 2007/2008. Currently some of these latter carriages are under restoration for NZ conditions and to form the basis of Mainline Steam’s carriage fleet. Of note Mainline Steam owns carriage AA 1013, the last remaining carriage from the Parliamentary Special of 1908. This carriage was restored in time for use on the Centenary anniversary train. Mainline has recently acquired surplus 56' carriages A56263, A56742, AO117, AO209 and ASO14.