The son of Isaac Humala, a labour lawyer, Humala entered the Peruvian Army in 1982. In the military he achieved the rank of Lieutenant Colonel; in 1992 he fought in the internal conflict against the Shining Path and three years later he participated in the Cenepa War against Ecuador. In October 2000, Humala led an unsuccessful military revolt by 39 soldiers in the southern city of Tacna against President Alberto Fujimori;[2] he was pardoned by the Peruvian Congress after the downfall of the Fujimori regime.

In 2005 he founded the Peruvian Nationalist Party and registered to run in the 2006 presidential election. The nomination was made under the Union for Peru ticket as the Nationalist party did not achieve its electoral inscription on time. He passed the first round of the elections, held on April 9, 2006, with 30.62% of the valid votes. A runoff was held on June 4 between Humala and Alan García of the Peruvian Aprista Party. Humala lost this round with 47.47% of the valid votes versus 52.62% for García. After his defeat, Humala remained as an important figure within Peruvian politics.

In 2011, Humala campaigned as a center-left leader with the desire to help to create a more equitable framework for distributing the wealth from the country's key natural resources, with the goal of maintaining foreign investment and economic growth in the country while working to improve the condition of an impoverished majority.[3]

Ollanta Humala (pronounced oh-YAHN-tah oo-MAH-lah) is the son of Isaac Humala, an ethnic indigenous lawyer, member of the Communist Party of Peru – Red Fatherland, and ideological leader of the Ethnocacerista movement. Ollanta's mother is Elena Tasso.[4] He is the brother of Antauro Humala, now serving a 25 years prison sentence for kidnapping 17 Police officers for 3 days and killing 4 of them and professor Ulises Humala.[5] Humala was born in Peru and attended the Japanese-Peruvian school La Union in Lima. He began his military career in 1982 when he entered the Chorrillos Military School.

In his military career, Humala was also involved in the two major Peruvian conflicts of the past 20 years, the battle against the insurgent organization Shining Path and the 1995 Cenepa War with Ecuador. In 1992 Humala served in Tingo María fighting the remnants of the Shining Path and in 1995 he served in the Cenepa War on the border with Ecuador.[6]

In October 2000, Humala led an uprising in Toquepala against Alberto Fujimori on his last days as President due to multiple corruption scandals. The main reason given for the rebellion was the capture of Vladimiro Montesinos, former intelligence chief who had fled Peru for asylum in Panama after being caught on video trying to bribe an opposition congressman. The return of Montesinos led to fears that he still had much power in Fujimori's government, so Humala and about 40 other Peruvian soldiers revolted against their senior army commander.[7]

Many of Humala's men deserted him, leaving him only 7 soldiers. During the revolt, Humala called on Peruvian "patriots" to join him in the rebellion, and around 300 former soldiers led by his brother Antauro answered his call and were reported to have been in a convoy attempting to join up with Humala. The revolt gained some sympathy from the Peruvian populace with the influential opposition newspaper La República calling him "valiant and decisive, unlike most in Peru". The newspaper also had many letters sent in by readers with accolades to Ollanta and his men.[7]

In the aftermath, the Army sent hundreds of soldiers to capture the rebels. Even so, Humala and his men managed to hide until President Fujimori was impeached from office a few days later and Valentín Paniagua named interim president. Later Humala was pardoned by Congress and allowed to return to military duty. He was sent as military attaché to Paris, then to Seoul until December 2004, when he was forcibly retired. His forced retirement is suspected to have partly motivated an etnocacerista rebellion of Andahuaylas[2] led by his brother Antauro Humala in January 2005.[8]

In 2002 Humala received a Master's degree in Political Science by the Pontifical Catholic University of Peru.

In October 2005 Humala created the Partido Nacionalista Peruano (the Peruvian Nationalist Party) and ran for the presidency in 2006 with the support of Union for Peru (UPP) . 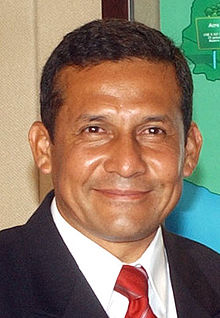 There were some accusations that he incurred in torture, under the nom de guerre "Capitán Carlos" ("Captain Carlos"), while he was the commander of a military base in the jungle region of Madre Mia from 1992 to 1993. His brother Antauro Humala stated in 2006 that Humala had used such a name during their activities.[11][12] Humala, in an interview with Jorge Ramos, acknowledged that he went under the pseudonym Captain Carlos but stated that other soldiers went under the same name and denied participation in any human rights abuses.[13]

On March 17, 2006 Humala's campaign came under some controversy as his father, Issac Humala, said "If I was President, I would grant amnesty to him (Abimael Guzmán) and the other incarcerated members of the Shining Path". He made similar statements about amnesty for Víctor Polay, the leader of the Túpac Amaru Revolutionary Movement, and other leaders of the MRTA. But Ollanta Humala distanced himself from the more radical members of his family during his campaign.[14][15][dead link][16][dead link] Humala's mother, meanwhile, made a statement on the March 21 calling for homosexuals to be shot.[17]

Ollanta Humala's brother, Ulises Humala, ran against him in the election, but was considered an extremely minor candidate and came in 14th place in the election.

On April 9, 2006 the first round of the Peruvian national election was held. Humala came in first place getting 30.62% of the valid votes,[18] and immediately began preparing to face Alan García, who obtained 24.32%, in a runoff election on June 4.

On May 20, 2006, the day before the first Presidential debate between Alan García and Ollanta Humala, a tape of the former Peruvian intelligence chief Vladimiro Montesinos was released by Montesinos' lawyer to the press with Montesinos claiming that Humala had started the October 29, 2000 military uprising against the Fujimori government to facilitate his escape from Peru amidst corruption scandals. Montesinos is quoted as saying it was a "farce, an operation of deception and manipulation". 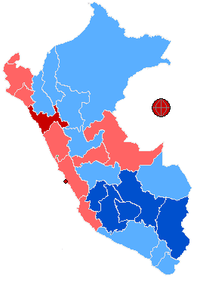 Geographic distribution of Second Round votes, by winning candidate.

Humala immediately responded to the charges by accusing Montesinos of being in collaboration with García's Aprista Party with an intention to undermine his candidacy. Humala is quoted as stating "I want to declare my indignation at the statements" and went on to say "Who benefits from the declarations that stain the honor of Ollanta Humala? Evidently they benefit Alan García".[19][20][21] In another message that Montesinos released to the media through his lawyer he claimed that Humala was a "political pawn" of Cuban President Fidel Castro and Venezuelan President Hugo Chávez in an "asymmetric war" against the United States. Montesinos went on to state that Humala "is not a new ideologist or political reformer, but he is an instrument".[22]

On May 24, 2006 Humala warned of possible voter fraud in the upcoming second round elections scheduled for June 4. He urged UPP supporters to register as poll watchers "so votes are not stolen from us during the tabulation at the polling tables." Humala went on to cite similar claims of voting fraud in the first round made by right-wing National Unity candidate Lourdes Flores when she told reporters that she felt she had "lost at the tabulation tables, not at the ballot box". When asked if he had proof for his claims by CPN Radio Humala stated "I do not have proof. If I had the proof, I would immediately denounce those responsible to the electoral system". Alan García responded by stating that Humala was "crying fraud" because the polls show him losing the second round.[23]

On June 4, 2006 the second round of the Peruvian elections were held. With 77% of votes counted and Humala behind García 45.5% to 55.5% respectively, Humala conceded defeat to Alan García and congratulated his opponent's campaign stating at a news conference "we recognise the results...and we salute the forces that competed against us, those of Mr Garcia".[24]

On June 12, 2006 Carlos Torres Caro, Humala's Vice Presidential running mate and elected Congressman for the Union for Peru (UPP), stated that a faction of the UPP would split off from the party after disagreements with Humala to create what Torres calls a "constructive opposition". The split came after Humala called on leftist parties to form an alliance with the UPP to become the principal opposition party in Congress. Humala had met with representatives of the Communist Party of Peru – Red Fatherland and the New Left Movement. Humala stated that the opposition would work to "make sure Garcia complies with his electoral promises" and again stated that he would not boycott García's inauguration on July 28, 2006.[25][26][dead link]

On August 16, 2006 prosecutors in Peru filed charges against Humala for alleged human rights abuses including forced disappearance, torture, and murder against Shining Path guerillas during his service in San Martín.[27][28] Humala responded by denying the charges and stating that he was "a victim of political persecution". He said the charges were "orchestrated by the Alan Garcia administration to neutralize any alternative to his power".[29] 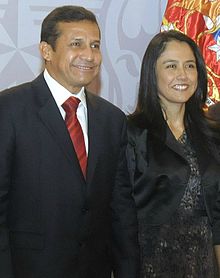 Humala with his wife

Humala ran again in the Peruvian general election[30] on April 10, 2011, with Marisol Espinoza his candidate for Vice-President.

On May 19, at National University of San Marcos and with the support of many Peruvian intellectuals and artists (including Mario Vargas Llosa with reservations), Ollanta Humala signed the "Compromiso en Defensa de la Democracia".[31][32] He campaigned as a center-left leader with the desire to help to create a more equitable framework for distributing the wealth from the country's key natural resources, with the goal of maintaining foreign investment and economic growth in the country while working to improve the condition of an impoverished majority.

Going into the June 5 runoff election, he was polling in a statistical tie with opponent Keiko Fujimori.[33] He was elected the 94th president of Peru with 51.5% of the vote.

After the news of the election of Ollanta as president the Lima Stock Exchange experienced its largest drop ever,[34][35][36] though it later stabilised following Humala's cabinet appointees who were adjudged to be moderate and in line with continuity.[citation needed] However he was also said to have inherited "a ticking time bomb of disputes stemming in large part from objections by indigenous groups to the damage to water supplies, crops and hunting grounds wrought by mining, logging and oil and gas extraction" from Alan Garcia.[37] Though he promised the "poor and disenfranchised" Peruvians with a bigger stake in the rapidly growing national economy his "mandate for change...[was seen as] a mandate for moderate change" with his "orthodox" cabinet appointees and his public oath on the Bible to respect investor rights, rule of law and the constitution.[38] He was officially sworn-in on 28 July 2011.

As part of his "social inclusion" rhetoric during the campaign, his government as led by Prime Minister Salomon Lerner Ghitis established the Ministry of Development and Social Inclusion in order to coordinate the efficacy of his social programmes. 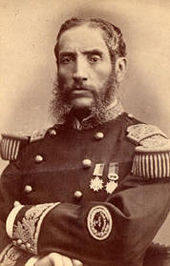 Ollanta Humala has expressed sympathy for the former government of Juan Velasco, which took power in a bloodless military coup on October 3, 1968 and nationalized various of the country's industries whilst pursuing a favorable foreign policy with Cuba and the Soviet Union.[39]

During his presidential candidacy in 2006 and his run for the presidency that he ultimately won in 2011, Humala has been closely affiliated with other pink tide leaders in Latin America in general and South America in particular. Prior to taking office in 2011 he toured several countries in the Americas where he notably expressed the idea of re-unite the Peru–Bolivian Confederation. He also visited Brazil, Colombia, the United States, Venezuela and Mexico.

Under the last section (Foreign Policy) Correct "countried" to "countries".