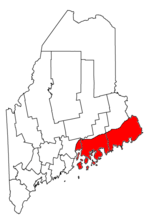 For other uses, see Down East (disambiguation).

In New England, the term Down East is applied in several different ways. In the narrowest sense, Down East refers to the coast of the U.S. state of Maine from Penobscot Bay to the Canadian border.

"Down East" can be best described as any point on the coast between Searsport and the Canadian border. At times, it is jokingly referred to as any point along the coast, east of the speaker.

The Down East, The Magazine of Maine FAQ explains the origin of the term: "When ships sailed from Boston to ports in Maine (which were to the east of Boston), the wind was at their backs, so they were sailing downwind, hence the term 'Down East.' And it follows that when they returned to Boston they were sailing upwind; many Mainers still speak of going 'up to Boston,' despite the fact that the city lies approximately 50 miles to the south of Maine’s southern border."[1]