Ephedra (genus)
This article is about the genus Ephedra. For the use of the plant in medicine, see Ephedra.

Ephedra is a genus of gymnosperm shrubs, the only genus in its family, Ephedraceae, and order, Ephedrales. Ephedra grows in dry climates over wide areas of the northern hemisphere, including southwestern North America, Europe, north Africa, and southwest and central Asia, and, in the southern hemisphere, in South America south to Patagonia. In temperate climates, most Ephedra species grow on shores or in sandy soils with direct sun exposure. Common names in English include Joint-pine, Jointfir, Mormon-tea or Brigham Tea. The Chinese name is mahuang (simplified Chinese: 麻黄; traditional Chinese: 麻黃; pinyin: máhuáng; Wade–Giles: ma-huang; literally "cannabis yellow"). Ephedra is also sometimes called sea grape (from the French raisin de mer), a common name for the flowering plant Coccoloba uvifera. 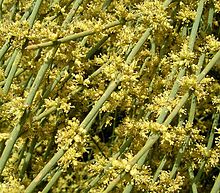 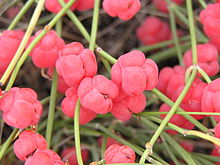 Plants of the Ephedra genus, including E. sinica and others, have traditionally been used by indigenous people for a variety of medicinal purposes, including treatment of asthma, hay fever, and the common cold.[1] The alkaloids ephedrine and pseudoephedrine are active constituents of E. sinica and other members of the genus. These compounds are sympathomimetics with stimulant and decongestant qualities and are related chemically to the amphetamines.

Pollen of Ephedra spp. was found in the Shanidar IV burial site in Iraq, suggesting its use as a medicinal plant dates to over 60,000 years ago.[2] It has been suggested that Ephedra may be the Soma plant of Indo-Iranian religion.[3] 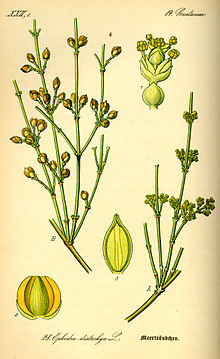 Earliest uses of Ephedra spp. (Ma Huang) for specific illnesses date back to 5000 BC. Ephedrine and isomers were already isolated in 1881 from Ephedra dystachia and characterized by the Japanese organic chemist Nagai Nagayoshi of the 19th century. His work to access Ephedra drug materials to isolate a pure pharmaceutical substance, and the systematic production of semi-synthetic derivatives thereof is relevant still today as the three species Ephedra sinica, Ephedra vulgaris and to a lesser extend Ephedra equisetina are commercially grown in Mainland China as a source for natural ephedrines and isomers for use in pharmacy. The application of botanical extracts from Ma Huang as a stimulant and anorexic drug has no validity in either TCM or modern Western medicine. E. sinica and E. vulgaris carry usually six optically active phenylethylamines, mostly ephedrine and pseudoephedrine with minor amounts of norephedrine, norpseudoephedrine as well as the three methylated analogs. Reliable information on the total alkaloid content of the crude drug is difficult to obtain. Based on HPLC analyses in industrial settings, the concentrations of total alkaloids in dried Herba Ephedra ranged between 1 to 4%, and in some cases up to 6%.[6]

For a review of the alkaloid distribution in different species of the genus Ephedra see Jian-fang Cui (1991).[7] Other American and European species of Ephedra, e.g. Ephedra nevadensis (Mormon tea) have not been systematically assayed; based on unpublished field investigations, they contain very low levels (less than 0.1%) or none at all.[citation needed]