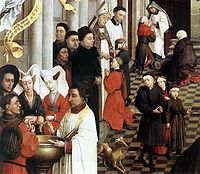 Detail from the Seven Sacraments Altarpiece by Rogier van der Weyden. In the lower left the priest is anointing an infant before it is baptized.

Oil of the Catechumens is the oil used in some traditional Christian churches during baptism; it is believed to strengthen the one being baptized to turn away from evil, temptation and sin.

Oil of Catechumens is to help strengthen the person about to be baptized, and prepare them for the struggle (ascesis) of the Christian life, the way a wrestler in ancient Greece and Rome was anointed before a wrestling match.

In the Eastern Orthodox Church, the oil of the catechumens is blessed by the priest during the baptismal rite. After the consecration of the baptismal water, a vessel of pure olive oil is brought to the priest by the deacon. The priest breathes on the oil three times and blesses it thrice, and says the prayer of blessing.

O Master, Lord God of our fathers, Who didst send unto them that were in the ark of Noah the dove, having in its beak a twig of olive, the token of reconciliation and of salvation from the flood the foreshadowing of the mystery of grace; and didst provide the fruit of the olive for the fulfilling of Thy holy Mysteries; Who thereby fillest them that were under the Law with Thy Holy Spirit, and perfectest them that are under grace: Do Thou Thyself bless also this holy oil with the power, and operation, and indwelling of Thy Holy Spirit, that it may be an anointing unto incorruption, an armour of righteousness, to the renewing of soul and body, to the averting of every assault of the devil, to deliverance from all evil of those who shall be anointed with it in faith, or who are partakers thereof; unto Thy glory, and the glory of Thine Only-begotten Son, and Thy most holy and good and life-creating Spirit, now and ever, and unto the ages of ages. Amen.

The priest then pours a portion of the oil into the baptismal font, making the Sign of the Cross with the oil three times, as all sing Alleluia. The priest gathers some of the oil floating on the surface of the water onto the first two fingers of his right hand and anoints the catechumen, making the Sign of the Cross on the brow, breast, between the shoulders, on the ears, hands and feet. The catechumen is then immediately baptized.

This anointing before baptism should not be confused with chrismation, which is a separate Sacred Mystery (Sacrament), though it is usually performed immediately after Baptism

In the Roman Catholic Church, the Oil of the Catechumens is specially blessed by a bishop or a priest along with Chrism and oil of the sick at the Mass of Chrism which takes place on Holy Thursday.

During the baptismal rite, the priest says the following words as he anoints with the oil in the shape of a cross, "We anoint you with the oil of salvation in the name of Christ our Savior; may he strengthen you with his power, who lives and reigns for ever and ever."