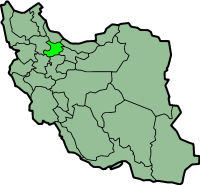 The province covers 15821 km² between 48-45 to 50-50 east of Greenwich Meridian of longitude and 35-37 to 36-45 north latitude of the equator. The province is bounded on the north by and , on the west by and Zanjan, on the south by Markazi and on the east by s. The famous mountains of the province are those of Siälän, Shäh Alborz, Khashchäl, Sephidkouh, Shojä e din, Alehtareh, Rämand, Ägh dägh, Kharaghän, Saridagh, Soltan pïr, and Siähkouh, in which Siälän with a height of 4175m and Shäh Alborz which is 4056m are the highest. All are part of the central chain of . The lowest point of the province is in Tärom e Soflä.

The climate of the province in the northern parts is cold and snowy in winters and temperate in summers. In the southern parts the climate is mild with comparatively cold winters and warm summers.

Qazvin was the location of a former capital of the and contains over 2000 architectural and archeological sites. It is a provincial capital today that has been a cultural center of mass throughout history.

Archeological findings in the Qazvin plain reveal the existence of urban agricultural settlements as far back as 7000BC. The name “Qazvin” or “Kasbin” is derived from Cas, an ancient tribe that lived south of the millennia ago. Qazvin is historically also rendered as Kazvin, Kasvin, and Casbin in western texts. The Caspian Sea itself in fact derives its name from the same origin. Qazvin geographically connects Tehran, Isfahan, and the to the Caspian seacoast and , hence its strategic location throughout the ages.

Qazvin has been a hotbed of historical developments in Iranian history. In the early years of the Islamic era Qazvin served as a base for the Arab forces. Destroyed by (13th century), the Safavid monarchs made Qazvin the capital of the Safavid empire in 1548 only to have it moved to Isfahan in 1598. During the Qajar Dynasty and contemporary period, Qazvin has always been one of the most important governmental centers due to its proximity to Tehran.

Bombed and occupied by n forces in both World Wars, Qazvin is also where the famous coup d’etat was launched from that led to the rise of the first dynasty in 1921. Qazvin is also situated near , where the famous , founder of the secret order of the Assassins, operated from. Qazvin has been able to survive all this turmoil, today having a population of 290,000 (1996).

Qazvin contains several archeological excavations dating back 9000 years ago. There are also 23 castles from the Ismaili Assassins nearby as well. And in the middle of the city, there lies the ruins of , one of several Sassanide edifices in the area.

Qazvin contains few buildings from the Safavi era when it was capital of Persia. Perhaps the most famous of the surviving edifices is the "Ali Qapu mansion", today a museum in central Qazvin.

After Islam, the abundant attendance of mystics (ascetics), as well as the prevalence of tradition (Hadith), religious jurisprudence (Fegh´h), and philosophy in Qazvin, led to the emergence of many mosques and religious schools among which the most magnificent ones are:
*Jame e Atigh Mosque: One of the oldest mosques in Iran constructed by the orders of in 807AD. In spite of the devastating Mongol invasion, this mosque still stands today in its full glory.
*Heidarieh Mosque: Renovated by Amir Khomär-täsh after the earthquake of 1119 AD, the history of construction of this mosque goes back to pre-Islam, where it was a fire temple.
*Masjed Al-nabi (Soltani Mosque): With an area of 14000m², this mosque is one of the most glorious mosques of antiquity, built in the Safavid period.
*Sanjideh Mosque: Another mosque of Qazvin dating back to pre-Islamic Iran; a former fire temple. Its present day form is attributed to the Seljukian era.
*Panjeh Ali Mosque: A former place of worship for royal harem members in the Safavid period.
*Peighambarieh School-Mosque: Founded 1644 according to inscription.
*Molla Verdikhani School-Mosque: Founded in 1648.
*Salehieh School-Mosque: Founded in 1845.
*Sheikhol Islam School-Mosque: Renovated in 1903.
*Eltefatieh School: Dating back to the Il-Khanid period.
*Sardar School- Mosque: Made by two brothers "Hossein Khan" and "Hassan Khan Sardar" in 1815, as a fulfillment of their promise if they came back victorious from a battle against the Russians.

Qazvin actually contains three buildings built by The Russians in the late 19th/early 20th century. Among these is the current Mayor's office (former Ballet Hall), a water reservoir, and the Cantor church where a Russian pilot is buried.

According to explorers (1588-1713), (1605-1689), (1643-1713), and others, there have been many Christians of various sects living in Qazvin for centuries. Qazvin is where The Saint Hripsime Church is located, and it is also where four Jewish prophets gave tidings of the arrival of Jesus Christ. Their tomb is now a popular shrine called "Peighambariyeh".

These are castles and fortifications left over mostly from the Isma'ili movement of the Middle Ages:
*Alamout Castle
*
*
*
*
*
*

Another grand attraction in Qazvin Province, is the tombs of two Saljuki era princes, "Aboo Saeed Bijar" son of Sad and "Aboo Mansoor Iltai" son of Takin, that are located in two separate towers known as the Kharaghan twin towers. Constructed in 1067, these are the first monuments in Islamic Architecture which include a non-conic two-layered dome.

Both towers were severely damaged by a devastating earthquake on March 2003.

In the old days, Qazvin was nicknamed the 'city of water reservoirs'. Of the 100 or so water reservoirs of Qazvin, only 10 remain today, all protected by the Provincial Cultural Heritage Organization. "See: "

During the 9th century A.D. seven gates made entrance to the city possible. In Qajar period there existed nine gates surrounding the city which were connected to each other through a wall around the city. These gates ("darvāzeh" in Persian) were:

Aside from Shahzadeh Hossein, a shiite saint, where a handsome shrine has been built, there are an abundance of scientists and mystics who lived in Qazvin, or came from Qazvin, or whose tombs are scattered throughout the cities and villages of the province. Some of these are:
*: Prominent linguist and author of Iran's first modern Persian dictionary, was originally from Qazvin.
*
*Oveis Qarani: A celebrity of early Islam, thought to have been killed here while fighting against an army of Deilamian origin. His tomb is known as "Sultan Veis".
*: The great Il-Khanid historian and writer (1281-1349) and author of "The Selected History" ("Tarikh Gozideh"), "Nezhatol Qoloub" and "Zafar Nameh". The turquoise conic dome and its inscription in Sols calligraphy in which Mostowfi’s family tree and his works are introduced are the features that distinguish the tomb from other historical monuments of Qazvin.
*Imam Ahmad Ghazali: Famous Iranian Gnostic who died in 1126 CE and was buried beside Shahzadeh Hossein. His tomb up to the end of the 16th century A.D. became the pilgrimage place for mystical sects. Following Shah Tahmasb’ s stubborn policies against philosophers and mystics and destroying Ghazali’s tomb, a group of his disciples took the remains of his body to the present place in Imamzadeh Ismail alley and constructed a new mausoleum for him. The monument was destroyed again in Mohammad Shah Qajar’s period only to be re-constructed by Majdol Islam Qazvini in 1910. Beside Ghazali’s tomb there is another tomb belonging to Soltan Seyed Mohammad Vali which dates back to 1625 CE
*Molla Khalil Ibn Ghazi Qazvini: Famous faghih (religious jurist) and famous commentator of the in period (d 1678).
*Shahidsaless: Killed in 1846. The third religious leader to be killed during prayer (first one being Imam Ali).
*Ra'ees ol-Mojahedin: The late Mirza Hassan Sheikhol Islam son of Mirza Masood Sheikhol Islam, leader of the liberals and constitutionalists of Qazvin whose endeavors and devotion to abolish the Qajar dynasty and conquer Tehran brought the title of Raeesol Mojahedin (chief of fighters) for him.
*Ali Ibn Shäzän
*Ibn Majeh
*Kheirol Nesaj
*Ibrahim Estanbeh Heravi
*Razi-olddin Taleghani
*Noor-olddin Geeli
*Ali Ibn Ghazi Ibn Ahmad
*Imam-olddin Rafee
*Siah Kolah
*Vaez Qazvini
*Allameh Zarabadi
*Sheikh Alak Qazvini
*Davoud Ibn Soleiman Ghazi
*Pir e Sefid
*Pir e Alamdar
*Molla Abdolvahab Darolshafaee
*Mohammad Ibn Yahya: Commentator of "Qamoosol Loghat"
*

13000km² is under cultivation in Qazvin, covering 12% of the cultivable lands of the country. These are fed by numerous subterranean canals, deep and semi-deep wells, and a large irrigating canal which originates from The Sangbän dam in Taleghän and Ziärän. The agricultural produce of the land is grape, hazelnut, pistachio, almond, walnut, olive, apple, wheat, barely, sugar beet, pomegranate, fig, and cereals. Animal husbandry, and aquatic and poultry breeding are developed throughout the province.

In recent decades, Qazvin has become a developing pole of the country, primarily due to its preferable location. Qazvin today is a center of trade, including , and , in addition to . It is on the line and the between Tehran and .

Qazvin has one of the largest power plants feeding electricity into Iran's national power grid, the "Shahid Raja'i" facility, which provides 7% of the country's electricity.