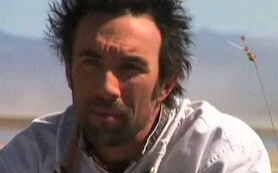 Francesco Daniele Quinn (born , ) is an American . The son of Oscar winner , Francesco is perhaps best known in the breakout role as Rhah in ’s Academy Award-winning "Platoon" (1986).

Francesco Quinn was born in , , the son of Anthony Quinn and second wife Iolanda Quinn, a noted er to whom Anthony Quinn would remain married for 31 years. [cite web|url=http://www.filmreference.com/film/90/Francesco-Quinn.html|title=Francesco Quinn Biography (1962-)|accessdate=2008-08-30|publisher=FilmReference] Quinn has Mexican, , Irish, and Italian ancestry.

Following in the footsteps of his father, who had appeared in more than 200 pictures, Francesco Quinn has displayed both acting range and a specialization in moody, dangerous characters with an edge; some of the more recent examples being “” himself in the alt-historical thriller "Vlad", and wandering warrior Thane Le Mal in the short film "". In 2007 he stepped it up even further, getting rave reviews for a starring performance "with little ego yet much presence" in the -nominated short "The Tonto Woman", adapted from the short story.

Straight historical drama has been one of the younger Quinn’s strengths, playing roles such as that of Latino Captain Salamanca in ’s mini-series "Into the West" (2005) and a lead role in TNT's "" (1997) (TV). One of Quinn’s earliest roles was as Marcus Vinicius in the 1985 mini-series "".

Francesco has appeared in 23 feature films including the New York Independent Film Festival winner "". He starred with his famous father in several films, including "A Star For Two" with . One of their most poignant performances together was in "", playing Santiago as a young man opposite his father as the elder version. More recent examples displaying his acting range have also been "Park", which won the coveted audience award at 2007 , and the poignant short film "", starring .

Francesco was a longtime fixture on CBS's hottest soap, "" and was nominated for an as Outstanding Actor in a Daytime Soap Opera for his work as Tomas Del Cerro, an aloof writer from New York.

Quinn was one of the earlier working actors to branch out into contributing to video games with his role as a main character in "" (1999).

He has been married to Julie McCann, who is the niece of the legend , since 1992, whom he refers to as the "love of his life and soul mate". They reside in with his twin children Max and Michela, who were baptized by the late . [cite web|url=http://www.imdb.com/name/nm0005331/bio|title=Internet Movie Database: Francesco Quinn|accessdate=2008-08-30|publisher=]

Francesco Quinn enjoys extreme sports such as , , , and ; and in the words of friends and associates "You’ll never see him without a bike". He road cycles at least 300 miles a week, , and actively races and street bikes. Quinn also is an avid motorcycler, and is a spokesperson for The Motorcycle Industry Council and Honda. An accomplished world traveler, he is fluent in English, French, Spanish and Italian.

Quinn was a contestant on "" on , until he was sidelined with a broken rib after being stomped on by a Level 2 bull.