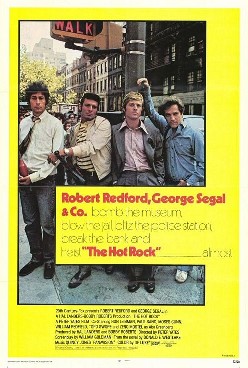 "The Hot Rock" () is a sly comic caper movie directed by , starring , , and . The film was based upon 's novel which introduced his long-running Dortmunder character.

The soundtrack to the film was provided by .

"Tagline":They're out to steal the hottest diamond in town with the funniest schemes in history !

After Dortmunder (Redford) is released from his latest stint in prison, he is approached by his , Andy Kelp (Segal), about another job. Dr. Amusa (Gunn) seeks a valuable in a that is of great significance to his people in , stolen during colonial times and then re-stolen by various African nations on multiple occasions since. Kelp and Dortmunder are joined by driver Stan Murch () and explosives expert Allan Greenberg (), and concoct an elaborate plan for stealing the gem from a museum in . Things go poorly, and the quartet has to steal the again and again.

First off, the diamond is eaten by Greenberg when the initial heist runs afoul and he gets caught by the police. After Greenberg tells them where he hid the rock in the police precinct jail (after bodily disposing it), another attempted heist is done on the precinct. The rock is nowhere to be found. It is later discovered that Greensberg's father () (who bailed him out of jail) was the only one who knew where it was.

After a series of clever bluffs, Mr. Greenberg reveals that he put it in his . With the help of a , Dortmunder is able to gain access to the safe deposit box and retrieve the rock. As he exits the bank, Mr. Greenberg and Dr. Amusa (who had made a separate deal with Greenberg for the rock after Dormunder's incompetence) arrive at the bank not knowing Dortmunder's success. Dortmunder climbs into a car where the others are waiting and a rousing cheer erupts as they drive off.

One lengthy scene depicts the gang flying by helicopter through Manhattan to break into a police station. During this footage, the helicopter flies close to the , then under construction. During some broadcasts of the film in 2005, television station TBS edited this sequence out of the film.