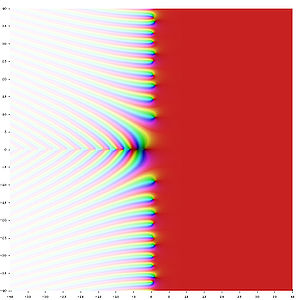 In mathematics, in the area of analytic number theory, the Dirichlet eta function is defined by the following Dirichlet series, which converges for any complex number having real part > 0:

Equivalently, we may begin by defining

which is also defined in the region of positive real part. This gives the eta function as a Mellin transform.

Hardy gave a simple proof of the functional equation for the eta function, which is

From this, one immediately has the functional equation of the zeta function also, as well as another means to extend the definition of eta to the entire complex plane.

Under the Riemann hypothesis, the zeros of the eta function would be located symmetrically with respect to the real axis on two parallel lines

, and on the perpendicular half line formed by the negative real axis.

Landau's problem with zeta(s)=eta(s)/0 and solutions

η must be zero at all the points

, where the denominator is zero, if the Riemann zeta function is analytic and finite there. The problem of proving this without defining the zeta function first was signaled and left open by E. Landau in his 1909 treatise on number theory: "Whether the eta series is different from zero or not at the points

, i.e., whether these are poles of zeta or not, is not readily apparent here."

A first solution for Landau's problem was published almost 40 years later by D. V. Widder in his book The Laplace Transform. It uses the next prime 3 instead of 2 to define a Dirichlet series similar to the eta function, which we will call the λ function, defined for

and with some zeros also on

, but not equal to those of eta.

If s is real and strictly positive, the series converges since the regrouped terms alternate in sign and decrease in absolute value to zero. According to a theorem on uniform convergence of Dirichlet series first proven by Cahen in 1894, the λ(s) function is then analytic for

, a region which includes the line Re(s) = 1. Now we can define correctly, where the denominators are not zero,

is irrational, the denominators in the two definitions are not zero at the same time except for s = 1, and the

function is thus well defined and analytic for

An elementary direct and

-independent proof of the vanishing of the eta function at

was published by J. Sondow in 2003. It expresses the value of the eta function as the limit of special Riemann sums associated to an integral known to be zero, using a relation between the partial sums of the Dirichlet series defining the eta and zeta functions for

Direct proof of eta(sn)=0 by Sondow

With some simple algebra performed on finite sums, we can write for any complex s

, we can now define

by continuity as follows,

The apparent singularity of zeta at

is now removed, and the zeta function is proven to be analytic everywhere in

A number of integral formulas involving the eta function can be listed. The first one follows from a change of variable of the integral representation of the Gamma function (Abel, 1823), giving a Mellin transform which can be expressed in different ways as a double integral (Sondow, 2005). This is valid for

The next formula, due to Lindelöf (1905), is valid over the whole complex plane, when the principal value is taken for the logarithm implicit in the exponential.

This corresponds to a Jensen (1895) formula for the entire function

, valid over the whole complex plane and also proven by Lindelöf.

The Cauchy-Schlömilch transformation (Amdeberhan, Moll et al., 2010) can be used to prove this representation, valid for

. Integration by parts of the first integral above yields another derivation.

Most of the series acceleration techniques developed for alternating series can be profitably applied to the evaluation of the eta function. One particularly simple, yet reasonable method is to apply Euler's transformation of alternating series, to obtain

Note that the second, inside summation is a forward difference.

Peter Borwein used approximations involving Chebyshev polynomials to produce a method for efficient evaluation of the eta function. If

the error term γn is bounded by

in the error bound indicates that the Borwein series converges quite rapidly as n increases.

, this is the alternating harmonic series

The general form for even positive integers is: