When dissolved in water, iron(III) chloride undergoes hydrolysis and gives off heat in an exothermic reaction. The resulting brown, acidic, and corrosive solution is used as a flocculent in sewage treatment and drinking water production, and as an etchant for copper-based metals in printed circuit boards. Anhydrous iron(III) chloride is a fairly strong Lewis acid, and it is used as a catalyst in organic synthesis.

Iron(III) chloride has a relatively low melting point and boils at around 315 °C. The vapour consists of the dimer Fe2Cl6 (c.f. aluminium chloride) which increasingly dissociates into the monomeric FeCl3 (D3h point group molecular symmetry) at higher temperature, in competition with its reversible decomposition to give iron(II) chloride and chlorine gas.[5]

Anhydrous iron(III) chloride may be prepared by union of the elements:[6]

Solutions of iron(III) chloride are produced industrially both from iron and from ore, in a closed-loop process. 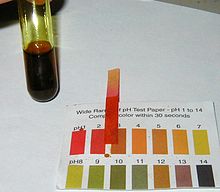 It is a moderately strong Lewis acid, forming adducts with Lewis bases such as triphenylphosphine oxide, e.g. FeCl3(OPPh3)2 where Ph = phenyl. It also reacts with other chloride salts to give the yellow tetrahedral FeCl4− ion. Salts of FeCl4− in hydrochloric acid can be extracted into diethyl ether.

Alkali metal alkoxides react to give the metal alkoxide complexes of varying complexity.[8] The compounds can be dimeric or trimeric.[9] In the solid phase a variety of multinuclear complexes have been described for the nominal stoichiometric reaction between FeCl3 and sodium ethoxide:[10][11]

It also reacts with iron to form iron(II) chloride:

Reducing agents such as hydrazine convert iron(III) chloride to complexes of iron(II).

In industrial application, iron(III) chloride is used in sewage treatment and drinking water production.[12] In this application, FeCl3 in slightly basic water reacts with the hydroxide ion to form a floc of iron(III) hydroxide, or more precisely formulated as FeO(OH)-, that can remove suspended materials.

It is also used as a leaching agent in chloride hydrometallurgy,[13] for example in the production of Si from FeSi. (Silgrain process)[14]

Iron(III) chloride is used as catalyst for the reaction of ethylene with chlorine, forming ethylene dichloride (1,2-dichloroethane), an important commodity chemical, which is mainly used for the industrial production of vinyl chloride, the monomer for making PVC.

In the laboratory iron(III) chloride is commonly employed as a Lewis acid for catalysing reactions such as chlorination of aromatic compounds and Friedel-Crafts reaction of aromatics. It is less powerful than aluminium chloride, but in some cases this mildness leads to higher yields, for example in the alkylation of benzene:

The ferric chloride test is a traditional colorimetric test for phenols, which uses a 1% iron(III) chloride solution that has been neutralised with sodium hydroxide until a slight precipitate of FeO(OH) is formed.[16] The mixture is filtered before use. The organic substance is dissolved in water, methanol or ethanol, then the neutralised iron(III) chloride solution is added—a transient or permanent coloration (usually purple, green or blue) indicates the presence of a phenol or enol.

This reaction is exploited in the Trinder spot test, which is used to indicate the presence of salicylates, particularly salicylic acid, which contains a phenolic OH group.

Iron(III) chloride is toxic, highly corrosive and acidic. The anhydrous material is a powerful dehydrating agent.