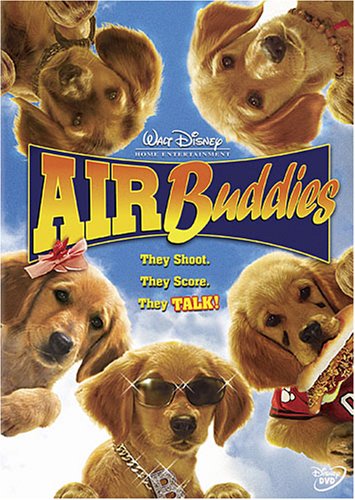 "Air Buddies" is the sixth film in the "" series and the first in the series "Air Buddies", which follows the life of a lonely teenager and his dog who has the uncanny ability to play every sport. The film was released on , . The film was rated PG by the MPAA for some mild rude humor, being the first and only film in the series to be rated PG by the MPAA since the original "".

The narrator, Sniffer introduces the Air Buddies Rosebud, Bud-dha, Budderball, Mudbud, and B-Dawg and explains their sport talents and personalities. After that, Noah and Henry, their parents, Buddy and Molly leaves to go to a soccer game. The pups refuse to be left alone and bored, and so they grab their toys and rush outside, only to be blocked by their babysitter, Mrs. Niggles and get baths instead. Afterwards, the babysitter tells them to take naps, but B-dawg refuses, and leads the pups out to watch the babysitter. Buddha notices the babysitter is 'finding her inner peace' and as the babysitter naps, the pups play their favorite sports with their toys and Mrs. Niggles's yarn. [Rosebud plays soccer, Buddha plays baseball, B-dawg does basketball, Mudbud plays volleyball, and Budderball plays football] After all the victory, Budderball climbs up the counter to claim his prize; Mrs. Niggles's blueberry pie, after throwing it onto the ground, the babysitter wakes up, but she's tied up by her yarn. Then the pups hear their parents coming home, and everything becomes a mess, Mrs. Framm think it's time to finds the Buddies new homes.

Meanwhile, Selkirk Tander tries to impress Mr. Livingston's son, Bartleby by showing him a female tiger for his birthday, but Bartleby wanted a animal he can play with, he wants Air Bud (Buddy) because Buddy can play sports. Mr. Livingston offers $500,000 if Selkirk can get Buddy, Selkirk send his nephew Grim and Denning to capture Buddy.

The next day, the Buddies raced outside to get the Sunday newspaper, ends up fighting over it and ripped it up. at school, Noah and Henry collected every kid's profile sheets and photos, after looking at girls and boys who would make good owners, the family decided to call the new owners tomorrow. Grim and Denning arrived at Buddy's home, only to see Buddy and Molly at the same time, thinking there are two air buds or they are mates. At morning, the pups decide to run away, Grim and Denning follows them, they managed to catch Budderball by luring him with a doughnut, the other Buddies goes and find Budderball but they were captured as well and used as bait to catch Buddy and Molly. Buddy managed to free the Buddies but Denning trapped him with a net, Molly tried to save Buddy but was captured too. The Buddies ask Sniffer for his help and where Buddy and Molly were taken to, Sniffer explain where Buddy and Molly are taken to is at wine country, the winery and refuse to help because he lost his sense of smell.

At wine country, Selkirk is pleased that Denning and Grim captured both Buddy and Molly so he could have them breed puppies and sell them for money, Grim explain that Buddy and Molly already had puppies and Denning let them get away, Selkirk told them to lock the dogs in the wine celler and go and capture the puppies and threatens if they don't catch the puppies, they will be fed to the tiger, Grim and Denning went back to Buddy's home to capture the Buddies but no luck. The Buddies sniffed their way to the outside cinema, Grim and Denning are watching the 101 Dalmatians because Grim said 'know your animal, do your research', the Buddies found their way to the projection room and they walked right in front of the projector, their shadows attracted Denning and Grim's attention, the Buddies then finds a snack bar and started eating, Grim opened the projector, temporary blinded himself, a female customer ordered a large popcorn, then finds Budderball in the popcorn and her scream is being heared by Denning and Grim and then slipped on a wet floor, the Buddies ran to a motor bike gang. Grim, still blind knocked the motor bikes over, angering the gang then tied Grim and Denning in front of the cinema screen and throwing food at them.

Grim and Denning caught up the Buddies, chasing them to a farm the Buddies met Billy the Goat and Belinda the Pig, they help the Buddies escape from Grim and Denning, the Buddies lure them into a stable, escape through a small hole and Billy locked them in. The Buddies went through the forest then met the Wolf who knows where the wine country is and led them to it. The skunk's spray enable Sniffer to smell again, called Noah and Henry and they went off to find the Buddies. Buddy and Molly managed to escape and went off to find the Buddies, Budderball falls down the hole Buddy and Molly dug and the other went down after him, Bartleby and his father came to collect the dogs but instead finds the Buddies, Bartleby and his father then put the Buddies in the limo, then Noah, Henry, Buddy and Molly came to rescue the Buddies, Budderball falls into one of the wine container and became drunk, Bartleby catches Budderball but caught by Sniffer. Noah, Henry and the dogs send a group of barrels towards Selkirk and Mr. Livingston, the barrels hits the wine container, breaking it, Selkirk and Mr. Livingston falls in and the container cracks open, washing them outside, Sheriff Bob arrested Selkirk, the Buddies apologize to Buddy and Molly, they understand and say they're ready for their new owners, Budderball decided to stay with Bartleby because he needs a friend, the Buddies are happy with their new owners.

The DVD contains a number of extra features.
* Train your dog to be a star
* Puppy profiles
* Hollywood backstage pass with AIR BUDDIES
* Jordan Pruitt music video "We Are Family"