Bleeding Kansas, Bloody Kansas or the Border War, was a series of violent events, involving anti-slavery Free-Staters and pro-slavery "Border Ruffian" elements, that took place in the Kansas Territory and the western frontier towns of the U.S. state of Missouri roughly between 1854 and 1858. At the heart of the conflict was the question of whether Kansas would enter the Union as a free state or slave state. As such, Bleeding Kansas was a proxy war between Northerners and Southerners over the issue of slavery in the United States. The term "Bleeding Kansas" was coined by Horace Greeley of the New York Tribune; the events it encompasses directly presaged the American Civil War.

The United States had long struggled to balance the interests of slaveholders and abolitionists. The events later known as Bleeding Kansas were set into motion by the Kansas–Nebraska Act of 1854, which nullified the Missouri Compromise and instead implemented the concept of popular sovereignty. An ostensibly democratic idea, popular sovereignty stated that the inhabitants of each territory or state should decide whether it would be a free or slave state; however, this resulted in immigration en masse to Kansas by activists from both sides. At one point, Kansas had two separate governments, each with its own constitution, although only one was federally recognized. On January 29, 1861, Kansas was admitted to the Union as a free state, less than three months before the Battle of Fort Sumter which began the Civil War.

The issue of slavery, deeply embedded in the culture of the Southern United States, had been divisive since the country's formation. Indeed, the United States Constitution probably would not have been ratified had not slavery been preserved. The Constitution's three-fifths compromise, under which three-fifths of a state's slave population was counted for purposes of its congressional representation, was another effort to balance the interests of slave states and free states. The issue became even more contentious as the country expanded and was faced with admitting new states as free states or slave states, threatening to shift the fragile balance of power in either direction. The Missouri Compromise was an attempt to preserve this balance; later, the Compromise of 1850 served a similar purpose, but the nation continued to teeter on the brink of civil war.

The Kansas-Nebraska Act of 1854 created the Kansas and Nebraska territories and opened the lands to settlement by American pioneers. The Act also established that the question of whether slavery would be allowed in the new states of Kansas and Nebraska would be decided by the inhabitants of the states – essentially repealing the Missouri Compromise. The concept of letting the settlers decide, now known as "popular sovereignty," was an idea advocated by U.S. Senator Stephen A. Douglas, chairman of the Senate Committee on Territories. Popular sovereignty was an attempt to offer concessions to the Southern states by making possible the expansion of slavery into both western and northern territories. While this doctrine, also known in Kansas Territory as "squatter sovereignty," was not actually formulated by U.S. Senator Lewis Cass, he nevertheless earned the sobriquet "Father of Popular Sovereignty" by providing its ideological framework in a letter published in the Washington Daily Union, which later also secured for Cass the presidential nomination of the Democratic party.[1]

Initially, it was assumed that few slave owners would attempt to settle in Kansas and make it a slave state, because it was thought to be too far north for profitable exploitation of slaves. However, the eastern portion of Kansas along the Missouri River was as suitable for slave-based agriculture as the nearby "black belt" of Missouri in which most of Missouri's slaves were held.

The settlement and the zone formation of the state government in Kansas became highly politicized beyond the borders of the territory. There were a number of reasons for this. Missouri, a slave state, was uniquely exposed to free states, with Illinois and Iowa bordering it on the east and north. Most parts of Missouri held very few slaves, and slave owners were a very small proportion of the state's population. If Kansas entered the Union as a free state, Missouri would have free soil on three sides. Since manumission, abolition activity, and escape were all more common in the border states, the existence of nearby free soil was a threat to Missouri slaveowners.

Also, in the Senate, each state is apportioned two senate seats. A rough balance had existed between free and slave states, but each addition of a state threatened to tip the balance, disrupting the status quo (see Slave Power).

Meeting of North and South 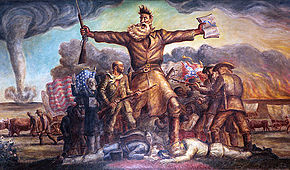 The first organized immigration to Kansas Territory was by citizens of slave states, most notably neighboring Missouri, who came to the territory to secure the expansion of slavery. Pro-slavery settlements were established by these immigrants at Leavenworth and Atchison.

At the same time, several anti-slavery organizations in the North, most notably the New England Emigrant Aid Company, were organizing to fund several thousand settlers to move to Kansas and vote to make it a free state. These organizations helped to establish Free-State settlements further into the territory, in Topeka, Manhattan, and Lawrence. Abolitionist preacher Henry Ward Beecher collected funds to arm like-minded settlers with Sharps rifles, leading to the precision rifles becoming known as "Beecher's Bibles." By the summer of 1855, approximately 1,200 New Englanders had made the journey to the new territory, armed and ready to fight.[citation needed]

Rumors had spread through the South that 30,000 Northerners were descending on Kansas, and in November 1854, thousands of armed pro-slavery men known as "Border Ruffians," mostly from Missouri, poured over the line in an attempt to steal the election to Congress of a single territorial delegate. Less than half the ballots were cast by registered voters, and at one location, only 20 of over 600 voters were legal residents. The proslavery forces won the election. While Kansas had approximately 1,500 registered voters at the time, not all of whom actually voted, over 6,000 votes were cast. More significantly, the Border Ruffians repeated their actions on March 30, 1855 when the first territorial legislature was elected, swaying the vote again in favor of slavery[citation needed]. 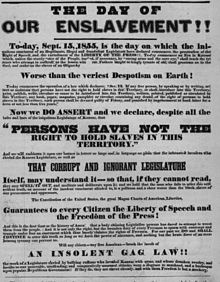 The proslavery territorial legislature convened in Pawnee on July 2, 1855, but after one week it adjourned to the Shawnee Mission on the Missouri border, where it began passing laws to institutionalize slavery in Kansas Territory. In August 1855, a group of Free-Soilers met and resolved to reject the proslavery laws passed by the territorial legislature. This meeting led to the drafting of the Topeka Constitution and the formation of a shadow government. In a message to Congress on January 24, 1856, President Franklin Pierce declared the Free-State Topeka government to be a "revolution" against the rightful leaders.[2]

Later, in April 1856, a three-man congressional committee investigated the vote. The majority report of the committee found the elections to be improperly influenced.

In October 1855, John Brown came to Kansas Territory to fight slavery. On November 21, 1855 the (relatively bloodless) "Wakarusa War" began when a Free-Stater named Charles Dow was shot by a pro-slavery settler. The only fatal casualty occurring during the siege was one Free-State man named Thomas Barber. He was shot and killed on December 6, 1855 where the main body of the invaders were encamped, some 6 miles (10 km) from Lawrence. A few months later, on May 21, 1856, a group of Border Ruffians entered the Free-State stronghold of Lawrence, where they burned the Free State Hotel, destroyed two newspaper offices and their printing presses, and ransacked homes and stores.

The following day, on the afternoon of May 22, 1856, Preston Smith Brooks (a Democratic Congressman from South Carolina) physically attacked Senator Charles Sumner of Massachusetts in the Senate chambers, hitting him on the head with his thick cane. Sumner was blinded by his own blood, and staggered away until he collapsed, lapsing into unconsciousness. Brooks continued to beat Sumner until he broke his cane. Several other senators attempted to help Sumner, but were blocked by Rep. Laurence Keitt, who was holding a pistol and shouting "Let them be!" This was in retaliation for insulting language Sumner used against Brooks's relative in a speech Sumner made that denounced Southerners for proslavery violence in Kansas. Sumner was beaten severely and did not return to his Senate desk for three years as a result of his injuries to the head and neck area; he became regarded as an antislavery martyr. 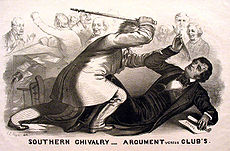 Preston Brooks attacking Charles Sumner in the U.S. Senate in 1856

These acts in turn inspired John Brown to lead a group of men in Kansas Territory on an attack at a proslavery settlement at Pottawatomie Creek. During the night of May 24, the group, which included four of Brown's sons, led five pro-slavery men from their homes and hacked them to death with broadswords. Brown's men let Jerome Glanville and James Harris return home to the cabin of Harris.

In 1856, the official territorial capital was moved to Lecompton, a town only 12 miles (19.3 km) from Lawrence. In April 1856, a three-man congressional investigating committee arrived in Lecompton to look into the troubles. The majority report of the committee found the elections to be improperly influenced by Border Ruffians. The President failed to follow its recommendations, however, and continued to recognize the pro-slavery legislature as the legitimate government of Kansas. In fact, on July 4, 1856, Pierce sent federal troops to break up an attempted meeting of the shadow government in Topeka.

In August, thousands of proslavery men formed into armies and marched into Kansas. That same month, Brown and several of his followers engaged 400 proslavery soldiers in the "Battle of Osawatomie." The hostilities raged for another two months until Brown departed the Kansas Territory, and a new territorial governor, John W. Geary, took office and managed to prevail upon both sides for peace. This was followed by a fragile peace broken by intermittent violent outbreaks for two more years. The last major outbreak of violence was touched off by the Marais des Cygnes massacre in 1858, where Border Ruffians killed five Free State men.

In all, approximately 56 people died in Bleeding Kansas by the time the violence completely abated in 1859.[3] Following the commencement of the American Civil War in 1861, additional guerrilla violence erupted on the border between Kansas and Missouri.

An adjunct to the guerrilla warfare in Bleeding Kansas was the fight over the constitution that would govern the state of Kansas. Several constitutions were drafted, including the 1855 Topeka Constitution, which created the shadow Free-State government to resist the illegitimate government voted in by unregistered Missourian voters.

In 1857, a Kansas constitutional convention was convened, which drafted what has become known as the "Lecompton Constitution," a pro-slavery document. The abolitionist forces boycotted the ratification vote because it failed to offer them a means to vote against slavery. The Lecompton Constitution was accepted by President James Buchanan, who urged acceptance and statehood. Congress disagreed and ordered another election. In the second election the pro-slavery forces boycotted the process, allowing the anti-slavery forces to claim victory by defeating the document. In the end, the Lecompton Constitution died because it was not clear whether it represented the will of the majority.

In mid-1859, the Wyandotte Constitution was drafted; this document represented the prevailing abolitionist view. It was approved by the electorate by a 2-to-1 margin, and Kansas entered the Union as a free state pursuant to its terms on January 29, 1861.

In 2006, legislation that enabled a new "Freedom's Frontier National Heritage Area" (FFNHA) was passed by Congress. The heritage area is tasked with describing the story behind the Missouri/Kansas border war, the story of settlement, and the enduring struggle for freedom in the region to the present. FFNHA comprises 41 counties, 29 of which are in eastern and east-central Kansas and 12 of which are in western Missouri.