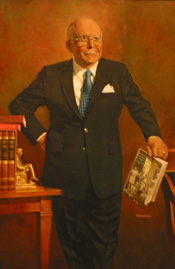 Augustus Freeman "Gus" Hawkins ( &ndash; ) was a prominent Democratic Party politician and a figure in the history of and Organized Labor. He served as the first African American from in the , where he sponsored the . Hawkins was very fair-skinned and was often confused for a person of European ancestry.

Hawkins was born in . He later moved to California, where he was a Democratic member of the State Assembly from 1935 until 1963. He was also a delegate to the National Conventions of 1940, 1944 and 1960 as well as an electoral college presidential elector from California in 1944. Hawkins attended high school in Los Angeles, and received his undergraduate degree from UCLA in 1931.

From 1963 until 1991, Hawkins represented California's 21st District (1963-1975), and the 29th District (1975-1991), in Congress. Early in his congressional career, he authored legislation including of the that established the . He later authored landmark legislation such as the Job Training Partnership Act and the School Improvement Act. He was also a founding member of the . As chair of the House Education and Labor Committee, he sponsored the , alongside Senator of . The Bill gave the U.S. government the goal to provide full employment; it also ordered that the Chairman of the must provide Congress with testimony on the state of the economy.

Over his career, Hawkins authored more than 300 state and federal laws. He also succeeded in restoring honorable discharges to the 170 black soldiers of the 25th Infantry Regiment who had been falsely accused of a public disturbance in in 1906, and removed from the Army.

Hawkins retired in 1991 to his Los Angeles home, and lived in for the remainder of his life. Until his death at the age of 100, he was the oldest living person to have served in Congress. He was the eighth person to have served in Congress that reached the age of 100. Hawkins' death left the former Republican Representative (1909-2008) as the oldest living former House member.