The Ministry of Education Language Centre (Abbreviation: MOELC) is a centralised educational institution for students in Singapore's education system to learn additional languages. There are two campuses located in Bishan and Newton, which are managed by the Ministry of Education of Singapore. Students attend the institution on top of the existing school they are attending.

Its primary purpose is to offer foreign language courses to students that will generally be their third language, within an official grading scheme reported back to their schools. However, it also teaches the Malay language as an institute where Malay can be learned as some schools do not have a Malay Department. In exemption cases, students can replace learning their mother tongue with a foreign language offered by the MOELC, as a second language is a requirement for all students in the Singapore education system.[citation needed]

Exemption is typically invoked if the student in question is returning from abroad and is not proficient in his or her mother tongue, or is an expatriate whose mother tongue is not one of the three "official" ethnic language groups of Singapore — namely the Malay language, the Chinese language or the Indian languages.

The Bishan MOELC offers the French language, German language and the Japanese language while the Newton MOELC offers the French language and the Japanese language under the Foreign Language Programme. The Malay language is not included in both as it is generally considered a mother tongue. The Malay language courses have both a Malay (Special Programme) and a Higher Malay track for different degrees of advancement in the language. Students of Higher Malay language are able to cede two points off their O-level score (a lower number is considered better in total O-level scoring) as long as some other minimal requirements are fulfilled.[1]

The main focus of the MOELC is at the secondary education level. Grading is examination-oriented. The formal goal of the MOELC is to have the students pass their GCE 'O' Levels for their respective languages, as the MOELC does not issue a diploma per se upon students' graduation from their respective courses. Qualifications received thus take in the form of an O-level certificate. For students taking a foreign language as their second language, these second language qualifications are necessary to enter most tertiary institutions in Singapore, due to the requirement for bilingualism. Grades are reported quarterly to the students' respective schools, with the two Continual Assessments (each making up 15% of the year-end grade), the first Semestral Assessment (25%) and the Final Examination (45%) contributing to a student's final grade. 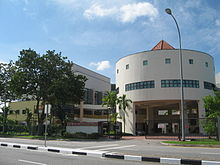 One of the campuses of The Ministry of Education Language Centre is located at Bishan Street 14, which was opened in 1998.

The other main purpose of the Centre is language enrichment and provision of grades back to the students' respective schools. This is because as the students progress through secondary school and junior college, the workload of their other subjects causes many students to drop their third language course at MOELC. The years that have been taken go on record and these can be used as partial qualifications later on in life.

Depending on the language taken, students may also take several other foreign language examinations, such as the French DELF/DALF certification examinations and the Japanese Language Proficiency Test. The focus on the additional examinations picks up for Junior College students, who take at least the GCE 'A' Levels at the conclusion of their course. This is primarily for students who eventually intend to receive tertiary education overseas; the language medium of their courses will be their third language (a national or official language of the destination country).

Generally, Indian students whose mother tongues are neither Tamil nor among the languages offered by their schools do not apply to the MOELC to take an Indian language. As the MOELC does not offer these, such students will have to find an alternative centre instead (see the list of schools in Singapore).

From 2008 onwards, Indonesian and Arabic are being offered as part of the Asian Languages programme, bringing the number of Third Languages offered by MOE from the original five to seven. The aim of the two new Third Languages is to facilitate future Singaporean engagement with Indonesia and to open up bridges into the Middle East, the latter being one of the world's fast-growing regions.[2]

Although the locals generally have little to no knowledge of these languages, French, German, Japanese and (more recently) Arabic are the most promoted foreign languages in Singapore. Signboards can be seen with text in French, German, and Japanese alongside the four official languages at Changi Airport.

The Bishan Language Centre was created in 1996. Previously, there was only one Language Centre, at Winstedt Road. Formerly, there was no centralised institute, bur rather eight decentralised regional institutions that taught extra languages, with the decentralisation akin to that of the Institute of Technical Education (ITE). The Ministry of Education decided to combine all the faculty and resources into one centralised building for greater efficiency in teaching students. The side effect of such centralization is that there may be long travel times from some parts of the country on Singaporean public transport, although the travelling time for one trip does not usually exceed more than fifty minutes.[citation needed] The building was recently renovated.

The MOELC does not charge tuition fees, but students have to buy their own materials and textbooks. This cost varies among the languages taken. For instance, the cost of materials for the French course for the first year ranges around S$90-100. After the first year, however, most of the materials are reused, including dictionaries.

Officially, if a student is not a citizen or permanent resident in Singapore, he or she can only take Malay courses, although exceptions are common.

Prior to 2009, classes at the MOELC took place in two sessions, one from 2.30 pm to 4.30 pm, and one from 4.30 pm to 6.30 pm. Examinations may take place either in the morning or the afternoon with variable timing. There are several hundred students per session on a particular day, and students attend two days a week, out of a possible five. This puts the total amount of admissions per year at several thousand.

With effect from 2009, Secondary One to Four students offering French, German and Japanese need only attend lessons at MOELC once a week. Each lesson lasts 3 hours 15 minutes, with a 15-minute break, in addition to a hypothetical 45 minutes of e-learning. Hence, similar to arrangements prior to 2009, 4 hours of instruction are administered weekly.

Students offering Malay (Special Programme), Arabic and Bahasa Indonesia continued with the arrangements prior to 2009 until 7 February 2011. From 7 February 2011 onwards, these students will have lessons only once a week for 3 hours 15 minutes.

JC H1 and H2 students offering French, German and Japanese follow arrangements prior to 2009; they attend lessons twice a week, each lasting 2 hours.

The introduction of the hypothetical 45 minutes of weekly e-learning into the curricula of the Secondary One to Four students offering French, German and Japanese has led to the abolition of e-learning weeks, formerly held twice a year, from all other curricula, including those of the unaffected Arabic and Bahasa Indonesia, as well as the JC H1 and H2 French, German and Japanese courses.

The MOELC (Bishan Campus) is located on Bishan Street 14 between the ITE Bishan building and the Bishan Stadium. Located north of the Bishan Bus Interchange and the Junction 8 Shopping Centre, it is separated from them by Bishan Street 14 and a large field. Access to the Mass Rapid Transit (MRT) network occurs through Bishan MRT Station.

The Centre also has several IT labs, a multilingual library, and an auditorium that can be used for presentations, lectures and screenings of foreign language films. All classrooms have multimedia support.

Rules and regulations exist but, in general, MOELC itself does not mete out punishment. Students who commit significant offences, such as vandalism, fighting, smoking or defiance, are referred back to their own schools for corporal punishment (caning) or other discipline.[3]