Millennium Dome
This article is about the Dome's use as a Millennium exhibition. For its post-redevelopment use as an entertainment district, see The O2 (London).

The Millennium Dome, colloquially referred to simply as The Dome, is the original name of a large dome-shaped building, originally used to house the Millennium Experience, a major exhibition celebrating the beginning of the third millennium. Located on the Greenwich Peninsula in South East London, England, the exhibition was open to the public from 1 January - 31 December 2000. The project and exhibition was the subject of considerable political controversy as it failed to attract the number of visitors anticipated, with recurring financial problems. All of the original exhibition and associated complex has since been demolished. The dome still exists, and it is now a key exterior feature of The O2. The Prime Meridian passes the western edge of the Dome and the nearest London Underground station is North Greenwich on the Jubilee Line. 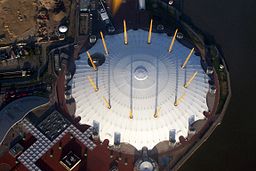 The roof seen from the air. 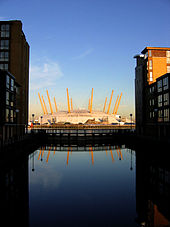 The dome, seen from the Isle of Dogs

The dome is the largest of its type in the world. Externally, it appears as a large white marquee with twelve 100 m-high yellow support towers, one for each month of the year, or each hour of the clock face, representing the role played by Greenwich Mean Time. In plan view it is circular, 365 m in diameter — one metre for each day of the year — with scalloped edges. It has become one of the United Kingdom's most recognisable landmarks. It can easily be seen on aerial photographs of London. Its exterior is reminiscent of the Dome of Discovery built for the Festival of Britain in 1951.

The architect was Richard Rogers. He and the contractor was a joint venture company, McAlpine/Laing Joint Venture (MLJV) formed between Sir Robert McAlpine and Laing Management.[1] The building structure was engineered by Buro Happold, and the entire roof structure weighs less than the air contained within the building. Although referred to as a dome it is not strictly one as it is not self-supporting, but is a mast-supported, dome-shaped cable network.[2] For this reason, it has been disparagingly referred to as the Millennium Tent.[3][4][5]

The canopy is made of PTFE-coated glass fibre fabric, a durable and weather-resistant plastic, and is 52 m high in the middle - one metre for each week of the year. Its symmetry is interrupted by a hole through which a ventilation shaft from the Blackwall Tunnel rises.

Apart from the dome itself, the project included the reclamation of the entire Greenwich Peninsula. The land was previously derelict and contaminated by toxic sludge from East Greenwich Gas Works that operated from 1889 to 1985. The clean-up operation was seen by the then Deputy Prime Minister Michael Heseltine as an investment that would add a large area of useful land to the crowded capital. This was billed as part of a larger plan to regenerate a large, sparsely populated area to the east of London and south of the River Thames, an area initially called the East Thames Corridor but latterly marketed as the "Thames Gateway".

Background to the Dome project

The Dome project was conceived, originally on a somewhat smaller scale, under John Major's Conservative government, as a Festival of Britain or World's Fair-type showcase to celebrate the third millennium. The incoming Labour government elected in 1997 under Tony Blair greatly expanded the size, scope and funding of the project[citation needed]. It also significantly increased expectations of what would be delivered. Just before its opening Blair claimed the Dome would be "a triumph of confidence over cynicism, boldness over blandness, excellence over mediocrity".[6] In the words of BBC correspondent Robert Orchard, "the Dome was to be highlighted as a glittering New Labour achievement in the next election manifesto".

However, before its opening, The Dome was excoriated in Iain Sinclair's diatribe, Sorry Meniscus - Excursions to the Millennium Dome (Profile Books: London 1999, ISBN 1861971796), which accurately forecast the hype, the political posturing and the eventual disillusion. The post-exhibition plan had been to convert The Dome into a football stadium which would last for 25 years: Charlton Athletic at one point considered a possible move but instead chose to redevelop their own stadium. Fisher Athletic were a local team interested in moving to the Dome, but they were considered to have too small a fan base to make this feasible. The Dome was planned to take over the functions performed by the London Arena, after its closure. This is the function which The O2 Arena has now undertaken. 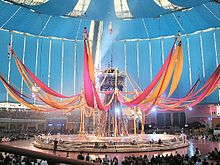 The Millennium Dome at night, Sept 2000

After a private opening on the evening of 31 December 1999 the Millennium Experience at the Dome was open to the public for the whole of 2000, and contained a large number of attractions and exhibits.

The interior space was subdivided into 14 zones (with the lead designers of the zones):

Some of the Zones were perceived as lacking in content. The Journey Zone, outlining the history and development of transport, was one of the few singled out for praise.[citation needed]

Surrounded by the zones was a performance area in the centre of the dome. With music composed by Peter Gabriel and an acrobatic cast of 160, the Millennium Dome Show was performed 999 times over the course of the year. Throughout the year, the specially-commissioned film Blackadder: Back & Forth was shown in Skyscape (a separate cinema on the site sponsored by Sky Television plc). There was also the McDonald's Our Town Story project in which each Local Education Authority in the UK was invited to perform a show of their devising which characterised their area and its people.

As well as the above, the first ever series of Techno Games was filmed there and shown on BBC Two the same year.

There were a number of other attractions both in and outside of The Dome. Inside the Dome there was a play area named Timekeepers of the Millennium (featuring the characters Coggsley and Sprinx), The Millennium Coin Minting Press in association with the Royal Mint, the 1951 Festival of Britain Bus, and the Millennium Star Jewels (focus of the failed Millennium Diamond heist[9]). Outside was the Millennium Map (thirteen metres high), the Childhood Cube, Looking Around (a hidden installation), Greenwich Pavilion, the Hanging Gardens at the front of the Dome, as well as a number of other installations and sculpture.

The project was largely reported by the press to have been a flop: badly thought-out, badly executed, and leaving the government with the embarrassing question of what to do with it afterwards[citation needed]. During 2000 the organisers repeatedly asked for, and received, more cash from the Millennium Commission, the Lottery body which supported it[citation needed]. Numerous changes at management and Board level, before and during the exhibition, had only limited, if any, results[citation needed]. Jennifer Page was sacked as chief executive of the New Millennium Experience Company just one month after the dome's opening.[10] Press reports suggested that the then Prime Minister, Tony Blair, personally placed a high priority on making the Dome a success[citation needed]. But part of the problem was that the financial predictions were based on an unrealistically high forecast of visitor numbers at 12 million. During the 12 months it was open there were approximately 6.5 million visitors — significantly fewer than the approximately 10 million paying visitors that attended the Festival of Britain, which only ran from May to September. Empire Exhibition, Scotland 1938 held in Glasgow attracted more than 12 million visitors being open May to October. Unlike the press, visitor feedback was extremely positive. It was the most popular tourist attraction in 2000, second was the London Eye; third was Alton Towers, which had been first in 1999.

According to the UK National Audit Office,[11] the total cost of The Dome at the liquidation of the New Millennium Experience Company in 2002 was £789 million, of which £628 million was covered by National Lottery grants and £189 million through sales of tickets etc. A surplus of £25 million over costs meant that the full lottery grant was not required. However, the £603 million of lottery money was still £204 million in excess of the original estimate of £399 million required, due to the shortfall in visitor numbers.[12]

It was, however, still of interest to the press, the government's difficulties in selling the Dome being the subject of much critical comment.[13] The amount spent on maintaining the closed building was also criticised[citation needed]. Shortly after it had closed, Lord Falconer reported that The Dome was costing over £1 million per month to maintain.[14]

Following closure of the Dome, some Zones were dismantled by the sponsoring organisations, but much of the content was auctioned. This included a number of artworks specially commissioned from contemporary British artists. A piece by Gavin Turk was sold for far below his then auction price though Turk stated that he did not think the piece had worked[clarification needed]. The Timekeepers of the Millennium attraction was acquired by the Chessington World of Adventures theme park in Surrey. A unique record of the memorabilia and paraphernalia of the Millennium Experience is held by a private collector in the United States.[15] Items such as kiosks, wastebins and assorted souvenirs appeared at the Dreamland Margate amusement park in Kent.

Despite the ongoing debate about the dome's future use, the dome opened again during December 2003 for the Winter Wonderland 2003 experience. The event, which featured a large fun fair, ice rink, and other attractions, culminated in a laser and firework display on New Year's Eve. It also served as the venue for a number of free music festivals organised by the Mayor of London under the "Respect" banner.[16]

Redevelopment and rebranding as The O2 Interior of The O2 Arena

By late 2000, a proposal had been made for a high-tech business park to be erected under the tent area, creating an "indoor city" complete with streets, parks, and buildings. The business park was actually the original 1996 proposal for the site of the peninsula before the plans for the Millennium Dome were proposed.

In December 2001, it was announced that Meridian Delta Ltd. had been chosen by the government to develop the Dome as a sports and entertainment centre, and to develop housing, shops and offices on 150 acres (0.61 km2) of surrounding land. It is also hoped to relocate some of London's tertiary education establishments to the site.[citation needed] Meridian Delta is backed by the American billionaire Philip Anschutz, who has interests in oil, railways, and telecommunications, as well as a string of sports-related investments.

The dome was publicly renamed as The O2 on 31 May 2005, in a £6 million-per-year deal with telecommunications company O2 plc, now a subsidiary of Telefónica Europe. This announcement, which presaged a major redevelopment of the site that retained little beyond the shell of the dome, gave publicity to the dome's transition into an entertainment district including an indoor arena, a music club, a cinema, an exhibition space and bars and restaurants. This redevelopment was undertaken by the dome's new owners, the Anschutz Entertainment Group, to a design by HOK SVE and Buro Happold. It cost £600 million, and the resulting venue opened to the public on 24 June 2007, with a concert by rock band Bon Jovi.[19]

Issues related to the Dome damaged Peter Mandelson's[20] and John Prescott's political careers.[21] The scheme was seen as an early example of what some saw as Tony Blair's often excessive optimism, who stated at the Dome's opening: "In the Dome we have a creation that, I believe, will truly be a beacon to the world".[22] The fact that Mandelson's grandfather was Herbert Morrison who as a minister had been involved with the Festival of Britain often was drawn on for negative comparisons.[20]

Chronology of the project