El Chapulín Colorado (Spanish: The Red Grasshopper) is a television series, created and played by Roberto Gómez Bolaños, also known as Chespirito, a successful Mexican comedian and TV show producer, which parodied superhero shows. It was first aired in Mexico by Canal de las Estrellas in 1970, but then was aired across Latin America and Spain until 1981, alongside El Chavo, which shared the same cast of actors. Both shows are incredibly enduring as they still are constantly re-run, and have won back some of their popularity in several countries such as Colombia, where it has aired in competition with The Simpsons (which has a character based on him). The name translates literally in English as "The Red Grasshopper" (the word chapulín is of Nahuatl or Aztec origin, and a current part of Mexican Spanish). He is additionally known in Brazil as "Vermelhinho" ("Little Red") and "Polegar Vermelho" ("Red Thumb") in allusion to the famous fairy tale character Tom Thumb. 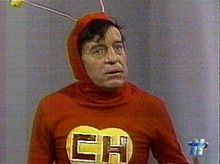 The show's success was largely due to the fact that it embodied many aspects of Latin and Mexican culture, while making a critique on the unrealistic image of superheroes. From the name itself to the slang and proverbs, Chespirito made a great effort to reflect Latin culture. Many of his characters' names start with "Ch" (a separate letter in the Spanish alphabet) and several secondary characters with the Spanish letter "Ñ".

The show featured a permanent cast of actors, in a similar way to that of Monty Python. However, the only actor from El Chavo to have a recurring role in El Chapulín Colorado was writer and director Chespirito, as a different cast of characters was featured every episode. He was a superhero who dressed all in red, with yellow shorts and shoes, a red hood, and bore a yellow heart on his chest with CH inscribed in red (akin to Superman's "S"). He was conceived as the opposite of the image of traditional American superhero: a weak, ugly, fearful, poor, clumsy, coward, shorty, womanizing and foolish man, but in the end always overcame his fears to defeat his enemies.

The typical Chapulín episode had some person in trouble and would say, "Oh! And who can help me now?" followed by Chapulín bursting in through the nearest available opening or materializing inside a wardrobe, under the sheets of a bed or the like. He would be immediately recognized (regardless of the time or place - one episode took place in the Planet Venus, for example) causing him to boast, only to stumble and fall right away. For some reason, Chapulín is believed by people to be a great superhero, but they usually end up disappointed when they realize he is actually puny and timid. Despite this, Chapulin did try his best to help, and all his adventures ended well (though sometimes by sheer good luck or outside help.)

Seemingly parodying Superman's "Faster than a speeding bullet, more powerful than a locomotive" introduction, Chapulín was introduced as follows in the show's opening, reinforcing the idea of a barely powered hero:

Usually, the show would introduce the characters of the current episode until one of them was endangered or victimized in some way, at which point they voiced the catchphrase "Oh, y ahora ¿quién podrá defenderme/nos?" ("Oh, who can save me/us now?"), or "Oh, y ahora ¿quién podrá ayudarme/nos?" ("Oh, and now, who can help me/us"). Chapulín would appear out of nowhere (usually dropping or hurting himself with something as he did), and say "¡Yo!" ("Me!"), to which the people in need would instantly yell "¡El Chapulín Colorado!" ("The Red Grasshopper!"), after which he'd be greeted by the victim(s). He always answered with his catchphrase "¡No contaban con mi astucia!" ("They did not count on my cleverness!").

With Chapulín, Chespirito, along with his production team, made extensive use of the chroma key device and bluescreen to produce visual effects which made the adventures of this superhero more interesting. Though somewhat unrefined by modern standards, the show achieved surprising effects like floating in the air or flying, performing impossible acrobatics, fighting against Martians, strange creatures, witches and all kinds of monsters, and, most often, to get the physical reduction effect thanks to his famous "pastillas de chiquitolina", which Chapulín used with measure to pass under doors, reaching dangerous areas without attracting attention or solve any problem with the size-changing trick.

This innovation, which was already known in Mexican television but not widely used, gave Chapulín the distinction of being virtually the only adventure-comedy broadcast in Mexico.

The show's heavy use of chroma key directly influenced the character's costume design. Red was the color that worked best with the chroma key.

Chapulín has enjoyed great popularity all over Latin America, the United States, Spain and other countries, albeit somewhat less than its sister production of El Chavo. Like El Chavo del Ocho, it is still shown in reruns in various countries. The cast of Chapulín was the same as that of El Chavo, although only actors Florinda Meza, Carlos Villagrán and Ramón Valdés were usually in every episode, however the characters usually were different. Some of the regular (albeit infrequent) characters who appeared, usually Chapulín foes, were El Tripaseca (Valdés) and El Cuajinais (Villagrán), a pair of Mafiosi who liked to make heists, as well as concurrent superhero Super Sam (played by Valdés too; see below). One-off villains, mostly those played by Valdés, like Wild West outlaw El Rascabuche, are also fondly remembered by fans.

Shorter Chapulín adventures were preceded by a skit, usually featuring Chespirito's other characters, like Dr. Chapatín, a tactless, impatient old physician, or El Chómpiras, an incompetent thief in the skit called Los Caquitos, alongside with El Peterete, played by Ramón Valdés. Chompiras and his new partner in crime, El Botija, played by Edgar Vivar, came to dominate the later years of Chespirito, an hourlong showcase featuring all the characters of the show.

The physical diversity of Chespirito actors permitted the richness of characters in the adventures, each week a new one. Chapulín was a hero of undetermined geographic and temporal location: his adventures could unfold in the American Old West, in ancient China, in London, in the Swiss Alps, during the Spanish Inquisition, in pirate ships, in Nazi Germany (an episode in which Chespirito played a double role as Chapulín and as Adolf Hitler himself, in the style of Charles Chaplin's The Great Dictator) or outer space, and his enemies range from the Yeti to Egyptian mummies, including his interaction, in some occasions, with literary characters such as Romeo and Juliet ("Juleo y Rumieta", or literally "Juleo and Rumiet").

El Chapulín Colorado is also very popular in Brazil. The company, Tec Toy, responsible for distributing the Sega consoles in Brazil published a video game for the Sega Master System called Chapolim x Drácula: Um duelo assustador (Chapulín vs. Dracula: A Frightening Duel). It was a localization of another existing SMS title, Ghost House, with the hero's graphics changed to Chapulín's.

The Simpsons' creator Matt Groening has declared that he created the Bumblebee Man character after watching El Chapulín Colorado on television at a motel on the U.S.-Mexico border. (This notwithstanding, the Bumblebee Man character also bears resemblances to an early Saturday Night Live recurring sketch with "Mexican killer bees" although the Chapulín character predated the SNL Character.) Simpsons fans sometimes call the character Chespirito, even though Bumblebee Man is only based on his character. It should also be mentioned that many Simpsons characters enjoy Chespirito/Bumblebee Man's show; competing comedian Krusty the Klown watches one gag and remarks in admiration, "I gotta steal that bit." Bumblebee Man's show also features characters similar to Doña Florinda and Quico (with the inevitable stereotyping mustache), as well as Chómpiras. However, there is no real similarity between the character of Bumbleblee Man and El Chapulín Colorado.