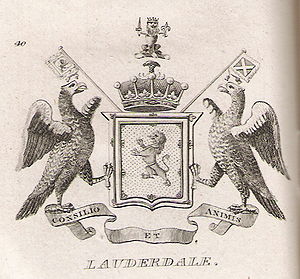 Arms of the Earls of Lauderdale as shown in Brown's The Peerage of Scotland, 1834

Earl of Lauderdale is a title in the Peerage of Scotland. It was created in 1624 for John Maitland, 2nd Lord Maitland of Thirlestane, Berwickshire. The second Earl was created Duke of Lauderdale but died without male issue when the dukedom became extinct. The earldom passed to his brother Charles, 3rd Earl. Charles married, in 1652, Elizabeth, daughter of Richard Lauder of Haltoun and by this marriage came into that family's great estates.

The Earl of Lauderdale, as The Bearer of the National Flag of Scotland, one of the Officers of the Royal Household in Scotland, has the right to bear the saltire.

The historical family seat is Thirlestane Castle, near Lauder, in Scotland. Thirlestane is currently the home of Captain the Hon Gerald Maitland-Carew and his family, Captain Maitland-Carew being a son of the late Lady Carew, wife of the 6th Baron Carew and a daughter of the 15th Earl of Lauderdale.

Lieutenant-Colonel John Maitland was the tenth son of the sixth Earl. Elizabeth Tollemache, 2nd Countess of Dysart was the second wife of the Duke of Lauderdale, but her titles passed to her son from her own previous marriage. 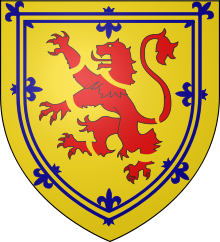 Arms of the Earl of Lauderdale, Chief of Clan Maitland — a lion mutilated (Old French mautalent - meaning "foul tempered"), forming a pun on the name.