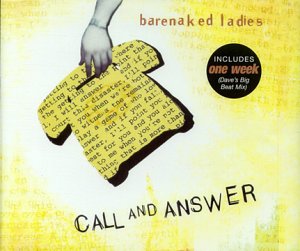 "Call and Answer" is a song by the Canadian group . It was the third single from their highly successful 1998 album, "Stunt" (though the song Alcohol was released as a radio sampler between "" and "Call and Answer"). The song was also included on the soundtrack for the film .

The song was a collaboration between and his longtime collaborator, . Its most notable property is that all the vocals on the album track are those of Page, and none of his other bandmates. This includes overlapping vocals, harmonies and octaves, and a call-and-response type of chorus. These vocals are handled by his bandmates during live performances. This, in addition to a long ad-lib outro makes the song a showcase of Page's vocal abilities. The song seems to be about the reconciliation of a tumultuous relationship.

When released as a single, the song was both remixed and edited into a radio mix which cut from the second verse to the third chorus, skipping a chorus, an instrumental break and the third verse. The remix was a slight adjustment of EQ and levels, and not a comprehensive remix involving adding or replacing musical elements.

The video for the song used the radio mix version, and involved the band living in a world of duplicates. All the houses look the same, all the cars are white s, and there are several "copies" of each band member. Notably, there are multiple Stevens that sing the multiple vocal lines he sings on the song. Steve is the main band member seen in the video, and the other band members are only in a few shots. Steve is paired with a female character in the video. The video was shot in Valencia, CA. There are two versions of the video; one which includes scenes from EdTV, and one which does not.

The song was performed on as a tribute to on his death in 2002.

It was performed as a duet with in 2004 during the co-headlining Au Naturale Tour.