Yama (Sanskrit: यम) is the lord of death in Hinduism, first recorded in the Vedas. Yama belongs to an early stratum of Indo-Iranian theology. In Vedic tradition Yama was considered to have been the first mortal who died and espied the way to the celestial abodes, thus in virtue of precedence he became the ruler of the departed. In some passages, however, he is already regarded as the god of death. Yama's name can be interpreted to mean "twin", and in some myths he is paired with a twin sister Yamī.

Yama is assisted by Chitragupta who is assigned with the task of keeping complete records of actions of human beings on the earth, and upon their death deciding to have them reincarnated as a superior or inferior organism, depending on their actions on the earth (Karma).

Yama is also the lord of justice and is sometimes referred to as Dharma, in reference to his unswerving dedication to maintaining order and adherence to harmony.

Yama can be compared to the Greek deity Hades or Pluto, the god of the underworld. 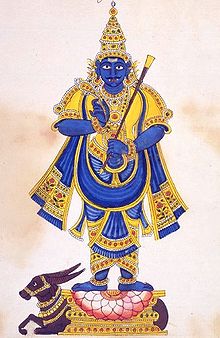 He is one of the Guardians of the directions and represents the south. Yama is also the god of justice and is sometimes referred to as Dharma, in reference to his unswerving dedication to maintaining order and adherence to harmony. It is said that he is also one of the wisest of the devas.[citation needed] In the Katha Upanishad, among the most famous Upanishads, Yama is portrayed as a teacher. He is the father of Yudhisthira (also known as Dharmaraja), the oldest brother of the 5 Pandavas (Karna was born prior to Kunti's wedlock, so technically Karna is Yudhishthira's older brother) and is said to have incarnated as Vidura by some accounts in the Mahabharata period.

In the Rig Veda he is mentioned as the son of Vivasvat and of Saranya, the daughter of Tvastar, with a twin sister named Yami.[4] Only three hymns (10.14, 10.135, and 10.154) in the Rig Veda are addressed to him. There is one other (10.10) consisting of a dialog between Yama and his sister Yami.[5] Yama's name is mentioned about 50 times in the Rig Veda but almost exclusively in the first and (far oftener) in the tenth book.[6]

Agni, who is a conductor of the dead, has close relations with Yama.[7] In RV 10.21.5 Agni is said to be the friend (kāmya) of Yama, and in RV 10.52 Agni is Yama's priest, serving as the burner of the dead.[8] Agni, Yama, and Mātariśvan are mentioned together as the names of one being, along with other forms of the divine, in RV 1.164.46, which says that "learned priests call one by many names."[9]

In art, some Sanskrit sources say that he should be of dark color, resembling the rain-cloud, with two arms, fire-colored eyes and sharp side-tusks. He is depicted with red clothes, and seated either on a lion throne or a he-buffalo.[10] A different iconographic form described in the Viṣṇudharmottara depicts him with four arms and wearing golden yellow garments.[11] He holds a noose of rope (pāśa) in one hand.

Subordination to Shiva and Vishnu 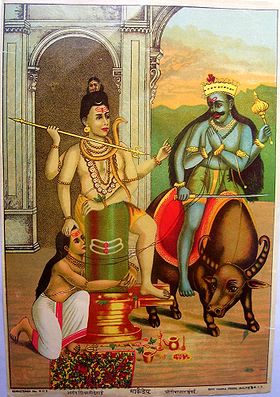 Kalantaka-Shiva defends his devotee Markandeya from Yama, who is seated on his bull.

Yama, although one of the most powerful controllers, is still subordinate to the controllers Shiva and Vishnu because they are different aspects of the overruling Brahman. A story of Yama's subordination to Shiva is well-illustrated in the story of Markandeya, where Shiva as Kalantaka ("Ender of Death") slays Yama and rescues his devotee Markandeya from his clutches.

Another story found in the Bhagavata Purana shows Yama's subordination to Vishnu. The man Ajamila had committed many evil acts during his life such as stealing, abandoning his wife and children, and marrying a prostitute. At the moment of his death he involuntarily chanted the name of Narayana (another Sanskrit name for Vishnu) and achieved moksha, becoming saved from the messengers of Yama. Although Ajamila had actually been thinking the name of his youngest son, Narayana's name has powerful effects, and thus Ajamila was released from his great sins.