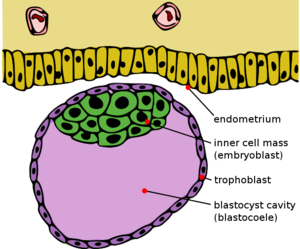 The blastocyst is the structure formed in early , after the formation of the , but before .

It possesses an inner cell mass, or embryoblast which subsequently forms the embryo, and an outer cell mass, or which forms the . The human blastocyst arises after compaction and comprises 70-100 cells. It is preceded by a , the fertilized egg cell, and succeeded by an .

Formation of the blastocyst

The former is the source of and gives rise to all later structures of the adult organism. The latter combines with the maternal to form the in mammals.