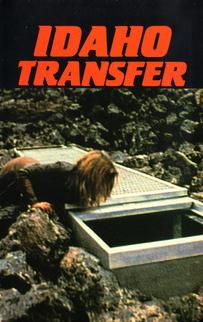 "Idaho Transfer" is a film directed by . It stars ,

Karen Braden (Kelley Bohanon) is a troubled teen — an outpatient at mental health clinics — who is suddenly brought by her father George and her sister Isa into a government project stationed near the Craters of the Moon lava fields in . The project has been commissioned to develop matter transference, but has made a greater le

time machines, and have discovered that a mysterious impending ecological catastrophe will wipe out civilization. Other government entities seek to shut down the project as the idealistic scientists attempt to keep the nature of their discovery a secret.

The use of the transfer devices has deleterious effects upon the health of the travelers. Adults "not much older than 20" are unable to survive the journey for long, as apparently their kidneys will begin to hemorrhage. Thus, the scientists have decided to send young people 56 years into the future in order to build a new civilization.

On the return trip from her orientation transfer, Karen accidentally kills her sister. Unable to find immediate help, she flees to the future again, where she becomes withdrawn despite the sympathies of the arriving young researchers.

After the time machines are taken offline by the government, the young researchers hike toward , but certain revelations do not bode well for the project's goals. Increasingly disheartened, Karen hikes back to the transfer station, where she is attacked by another researcher who has been driven mad by what she has discovered. Karen uses the time machine to escape and returns to a point farther in the future, where she encounters the residents of that time.

Most of the cast were unknowns who did not not go further in the motion picture industry. The exceptions are noted.

* as Karen Braden:Bohanon's only other screen role was a bit part in the 1971 film "The Christian Licorice Store".
*Kevin Hearst as Ronald
*Caroline Hildebrand as Isa Braden
* as Arthur:Carradine had already appeared in three films, "" (1971), "" (1971), and "" (1973). He has gone on to appear in dozens of other films and television productions.
* as George Braden:D'Arms would go on to appear in a dozen other films over the next thirty years, perform voice work for video games, and work as a photographer.
* as Judy (as Judy Motolsky):Motulsky would go on to appear in "" (1976), "" (1978) and an episode of the "".

The film was produced by Peter Fonda's ,

The end credits conclude with the Latin phrase "Esto Perpetua". Translated, it means "Let it be perpetual" or "It is forever"; appropriate for a time travel film, it is also the of the state of Idaho.

Reception of "Idaho Transfer" has been widely mixed. "Time" described it as a "very deliberate and closely controlled film graced with a slow, severe beauty that makes its quiet edge of panic all the more chilling",

While the performances by non-professional talent have been received negatively by nearly all critics, the film's overall naturalist technique was better understood by the critics of its day.

The Isa Braden character mentions they travel "56 years" into the future, thus if they are leaving 1973, the year of their arrival would be 2029. The 2003 DVD cover declares that the young scientists enter the year 2044;

The title of "Idaho Transfer" in its video release in the UK is "Deranged", which is easily confused with the 1974 film "", about a necrophiliac serial killer.

The title "Deranged" likely refers to the lead character's state of mental health, but the degree to which Karen is troubled is very unclear. Her sister Isa is delighted at Karen's arrival, and asks only casually after her condition ("How's her head?") while her father evinces little fear that Karen will be able to adapt to time travel. Karen first appears on screen having her braces removed for time transfer, and happy to see her sister, none of which suggest a history of mental illness. Then in a voice over, Isa asks if Karen is still a virgin, and Karen responds, conversationally, that she was raped while at the clinic; Isa never acknowledges this surprising statement, and this has startled recent reviewers.fact|date=March 2008 Isa's death is accidental, due to an oversight of Karen's while she is hurrying to save Isa after a fall. Karen's subsequent erratic behavior is presented as understandable grief and depression rather than a "deranged" .

"Idaho Transfer"'s confrontational social message both departed from 1960s idealism, and echoed the issues raised by H.G. Wells in "", where the gentler half of humanity lets itself be devoured by the harsher half.

The film refers to a disastrous "eco-crisis", presumably an ecological collapse of the environment precipitated by mankind. Ecology was of popular interest at the time the film was made, notably the first in 1970 and the 1972 Stockholm Conference. American anti-pollution activism focused a great deal on simple following 's 1971 "Crying Indian" ad campaign; hence, brief images of discarded bottles, toilet paper and plastic wrappers in "Idaho Transfer" are meant to evoke a wider ecological breakdown, even as most outdoor shots dwell on the untouched natural beauty of the region.

Prescience of the energy crisis

"Idaho Transfer" was first run in theaters on June 15, 1973, and had a perhaps wider release that September. It was in release at the time of the OPEC oil embargo which began on October 17, precipitating the . The 1973 embargo left the United States facing a winter with waiting lines for gasoline, rationing not seen since the end of World War II, and ultimately high . While the film's "eco-crisis" is never defined, the conclusion directly indicates a connection to oil scarcity and the need for alternative fuels. The film's timeliness was so precise, it prompted "Time" magazine reviewer to write, "They bring about a horrifying but crazily logical ending that turns the future into a forbidding present tense."