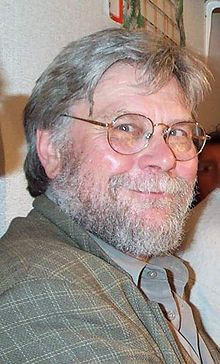 Daniel J. Sandin (born 1942) is a video and computer graphics artist/researcher. He is a Professor Emeritus of the School of Art & Design, University of Illinois at Chicago, and Co-director of the Electronic Visualization Laboratory at the University of Illinois at Chicago.[1] He is an internationally recognized pioneer in computer graphics, electronic art and visualization.[citation needed]

Dan Sandin received his B.A. in Natural Sciences from Shimer College, IL in 1964 and his M.S. in Physics from the University of Wisconsin–Madison in 1967.[2] He became interested in video in 1967, while helping to organize student demonstrations at the University of Illinois.

In 1969, he moved from the University of Wisconsin–Madison to the University of Illinois at Chicago after his presentation at the Smithsonian of "Glowflow", a computer controlled light and sound system, created with Myron Krueger. His major achievements were a series of projects Glowflow (1969), Sandin Image Processor (IP) (1971–1973), Sayre Glove (1977), PHSColograms (1988), CAVE (1991) and ImmersaDesk and Infinity Wall.

Dan Sandin has said that his career has three main objectives:[citation needed]

From 1971 to 1973, he designed the Sandin Image Processor, a patch programmable analog computer for real-time manipulation of video inputs through the control of the grey level information. This modular design was based on the Moog synthesizer. With Tom DeFanti, he would combine it with real-time computer graphics and synthesized music and perform visual concerts. He has performed worldwide and has received grants in support of his work from the Rockefeller Foundation (1981), the National Science Foundation, the National Endowment for the Arts (1980) and the Guggenheim Foundation (1978). His piece "Spiral PTL" was one of the first pieces included in the Museum of Modern Art's video art collection.

In 1977, with Tom DeFanti and Rich Sayre, he designed the Sayre Glove, the first data glove, as part of a grant from the National Endowment for the Arts. This device used light based sensors with flexible tubes with a light source at one end and a photocell at the other. As the fingers were bent, the amount of light that hit the photocells varied, thus providing a measure of finger flexion. It was mainly used to manipulate sliders, but was lightweight and inexpensive.

By 1988, Sandin was working on a type of digital photography called PHSColograms; a system whereby a number of still images were situated in an autostereoscopic manner and back-projected with light. The effect was very similar to holograms and many times viewers would mistake them as such. The initial system supported roughly 13 images but further improvements now could easily allow 100 such images to be used. This system was designed primarily for use in the medical field where these quasi-3D images could benefit surgeons. 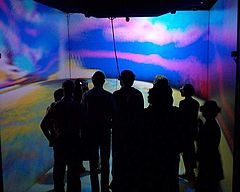 In 1991, in conjunction with Tom DeFanti and graduate students, he designed the CAVE system. This is an immersive system that is the current standard for Virtual Reality systems. The normal full system consists of projections screens along the front, side and floor axes, and a tracking system for the "user". Although they used the recursive acronym Cave Automatic Virtual Environment for the CAVE system, the name also refers to Plato's "Republic" and "The Allegory of the Cave" where he explored the concepts of reality and human perception.

Since then there have been a couple off-shoots of the CAVE technology: ImmersaDesk and Infinity Wall. The ImmersaDesk is a semi-immersive system, resembling a drafting table, while the Infinity Wall is designed to cater to an entire room of people, such as a conference room.