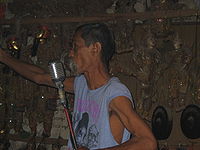 The Moustache Brothers is composed of U Par Par Lay, U Lu Zaw, and Lu Maw. Lay and Zaw served almost six years of a sentence to seven years in labour camp for criticizing the government in a performance at the home of Aung San Suu Kyi in Rangoon in 1996. Two National League for Democracy members who had arranged the performance were also arrested and served the same time. Amnesty International led a campaign for their release, and negotiations by Suu Kyi are suspected of having contributed to their release. As part of the conditions for their release and the fact that they are under house arrest regulations, they are now allowed to perform only for foreigners, within the garage of their Mandalay house.

Par Par Lay was released on November 1, 2007 after 36 days in prison and is performing again with his family and troupe in Mandalay.