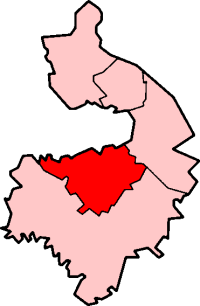 The district comprises the towns of itself, , and , and also includes the surrounding rural areas. The district is bordered to the south and west by Stratford district to the north-east by Rugby borough and to the north by City Council.

Despite being named after Warwick, the district council headquarters are in Leamington Spa. It employs more than 500 people in a four storey building near to the . Warwick hosts the headquarters. The district council deal with issues such as waste management, , planning/building regulations, and council house repairs. The county council looks after such matters as education, social services, culture and highways.

The district was created on , by a merger of the former Leamington Spa and Warwick s, the Kenilworth and the . The council claimed to have the 33rd cheapest council tax out of the 238 shire districts in the country [cite web|url= http://www.warwickdc.gov.uk/WDC/Council_x2c_+government+and+democracy/Democratic+processes+and+events/News+conferences/Warwick+District+Council+News/Council+tax+200708.htm|title= Warwick DC|accessdate= ????-??-??] .

In 2007 the district began trialling a scheme which would eventually allow all residents, for a fee, to connect to wireless broadband internet anywhere in the district, indoors or out [cite web|url= http://www.warwickdc.gov.uk/WDC/Council_x2c_+government+and+democracy/Democratic+processes+and+events/News+conferences/Warwick+District+Council+News/Wireless+Warwick.htm|title=Warwick DC|accessdate= ????-??-??] . This is the first such scheme in EuropeFact|date=July 2008.

On 6th August 2007 on-street parking charges were introduced in certain parts of central , and for the first time.

Two of the most well known tourist attractions in the district are and , the latter being preserved the second ruined during the . Also of interest are the National Trust property and . All three of the districts main towns, Leamington, Warwick and Kenilworth have many hotels, two of the better known ones being and a Hilton Hotel at Warwick. hosts televised meetings several times a year and the English women's championships takes place in Leamington each year.

There are three public swimming pools and three leisure centres in the district as well as many public open spaces, the most well known being Leamington's and . There are two public pay-per-play golf courses, one in Leamington and one in Warwick. The biggest football teams in the area are and . All three towns have their own theatres including the , , and .

The district has these five Warwick, Warwick Parkway, Leamington, Hatton, and Lapworth. The flows through the district and the also passes through.

The Warwick district includes the settlements and Parishes of: