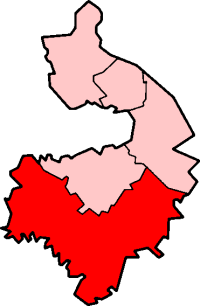 Stratford-on-Avon is a local government district of southern in .

The district is named "Stratford-on-Avon" to distinguish it from its main town of where the district council is based, although this name often causes confusion [http://www.stratford.gov.uk/community/] .

The district is mostly rural and covers most of the southern half of Warwickshire. As well as Stratford, the district also includes the towns of , , and , and the large villages of and .

The district was formed on by the merger of the of , , , and a majority of .

In the state sector, children start school in the school year (1st September to 31st August) in which they turn five. They stay at primary school for seven years until they are eleven. As part of Warwickshire, Stratford-on-Avon still maintains the system. In the final year of , children are given the opportunity of sitting the exam in order to compete for a place at one of the Grammar schools.

The Grammar schools in the district are King Edward VI, and .

Other than Stratford-upon-Avon the district includes: