Delémont (German: Delsberg) is the capital of the Swiss canton of Jura. The city has approximately 11,000 inhabitants as of 2007.

Delémont lies 30 kilometers (18.6 mi) southwest of Basel, about halfway between Basel and Bienne. It stretches along both sides of the Sorne river, shortly before it flows into the Birs on the northern edge of the Delémont valley, a wide depression in the Jura Mountains.

The 22 km2 (8.5 sq mi) area of the municipality is largely given to intensive cultivation. At the south end of the valley is the Montchaibeux, an isolated hill. On the north, the valley is bounded by the Les Rangiers range, with la Chaive (930 m (3,050 ft)) as the highest point in the municipality. The eastern boundary is the Birs River. In 1997, 18% of the land was residential, 43% was wooded, 38% was farmland, and 1% was unutilized.

Delémont hosts the parliament and government of the Canton of Jura, but many other governmental functions are housed in Porrentruy, such as the cantonal courts.

Already in 1770, the city began to develop as a strong trading and manufacturing center. Only about 25% of the population was still engaged in agriculture. In the 19th century, industrialization began, led by steel mills, watchmaking, and machine, cigar, and cement manufacturing.

Perhaps the most well known firm based here is Wenger. Their factory does not have a show room.

Today, Delémont is the economic and governmental hub of the canton, as well as the neighboring Jura region of the Canton of Bern. In addition to its traditional manufacturing core, it has developed much employment in the service sector. Although, it is plagued by a large unemployment rate, forcing its inhabitants to seek for jobs in the larger neighboring cities such as Basel or Biel.

At Delémont the railway from Paris, Belfort and Delle connects with the Bienne to Basel line. The section of line between Belfort and Delle is currently being electrified and an hourly optymo bus service maintains the connection between Delle and Belfort.[3]

Delémont has good road connections to the surrounding cities. It lies on the main road between Basel and Bienne, as well as La Chaux-de-Fonds. In 1998, the first stretch of motorway in the canton of Jura (the A 16) was opened between Delémont and Porrentruy.

The first stretch of rail line reached Delémont from Basel in 1875. The continuation to Moutier was completed in 1876. All trains from Basel to Bienne must reverse in Delémont.

During World War II, the train station was bombed several times by the Allies, killing a number of railway employees. 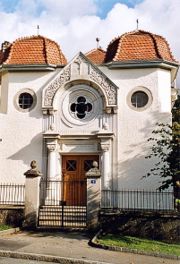 The synagogue of Delémont

The area of the municipality was already settled in the Bronze Age. Fifteen urn burials have been discovered in the municipality. There is also evidence of a Roman settlement. The first historic mention of the name dates from 737 as Delemonte. In 1131, the first mention of the German name Telsperg was recorded. It is also mentioned as Laimunt (1181) and Deleymunt (1225). The name is a combination of the Germanic Tello or Dagili with the Latin word mons for mountain.

Since the 7th century, the region belonged to the lands of the counts of Alsace. In the 12th century, it was sold to the Bishop of Basel. The city was declared to have municipal rights by Bishop Peter Reich von Reichenstein on January 6, 1289. From 1289 to 1793, it was the capital of the estate of Delémont. During the Counter-Reformation a monastery of the Order of Friars Minor Capuchin and an Ursuline convent were established, which remained until 1793.

In 1793, Delémont was conquered by French Revolutionary troops and became the seat of one of the districts of the Département du Mont Terrible. In 1800, this was incorporated into the Département du Haut-Rhin. After the fall of Napoleon, the region was given to the Canton of Bern in 1815.

Since 1947, the city became a center for agitation for separation from the Canton of Bern. In the referendums in 1959 und 1974, a large majority voted for the creation of the Canton of Jura. From 1976 to 1978, Delémont was the meetingplace for the drafting of the cantonal constitution for the new canton, which was created January 1, 1979, with Delémont as its capital.

The medieval city center still has its original outline. Two of the city gates date from the 18th century: the Porte au Loup (1775) and the Porte de Porrentruy (1756–59). There are also still parts of the city wall, with the Tour des Archives, which was originally built in the 13th century. The city squares are marked by monumental fountains dating from the 16th century, in Renaissance style.

The Catholic church of Saint-Marcel was built from 1762 to 1767 with a mixture of architectural styles from the baroque to the classical. Other important buildings from the time of the Bishops of Basel are the Hôtel de Ville (built from 1742 to 1745), the Châtellenie (now used as a courthouse, remodeled in 1717), and the Episcopal Palace (1716–21). The late gothic chapel of Saint-Michel dates from the 17th century.

The synagogue of Delémont is in the western part of the city. The Castle of Domont, built in 1560, is now a restaurant. There are also ruins of an early medieval castle, the Vorbourg, on the west side of the Birs. Next to them stands a chapel, dedicated in 1049 and repeatedly renovated. The main altar with the Madonna dates from the 16th century.

Delémont was awarded the Wakker Prize for preservation of its architectural heritage in 2006.