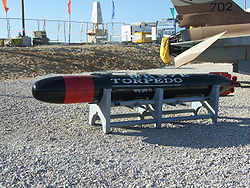 Its engineering development began in 1946 by Westinghouse-ORL. It was based on the active homing system tested on modified Mark 18s, with added passive homing and a new torpedo body. Between 1955-56, thirty torpedoes were produced for development testing, with large-scale production commenced shortly afterwards. [1]

Due to its electric propulsion, the torpedo swam smoothly out of the launch tube, instead of having to be ejected by pressurized air, therefore significantly reducing its acoustic launch signature.

The guidance of a Mk37 mod 0 torpedo was done by a gyroscope control during the initial part of its trajectory, where the gyro control achieved a straight run, a passive sonar homing system, and at the last 700 yards (640 m) by a Doppler-enabled active sonar homing, with magnetostrictive transducers operating at 60 kHz. The electronics was based on miniature vacuum tubes, later on solid-state semiconductor devices.

The mod.1 torpedoes were longer, slower and heavier than mod.0, but offered better target acquisition capabilities and higher ability to intercept agile submarines. They used wire-guidance.

The efficiency of Mk37 torpedoes was high for targets with speed lower than 20 knots (37 km/h) and depth less than 1,000 ft (300 m). As submarines with higher speeds and operating depths appeared, new torpedoes were developed. Of them, NT37C, D, E, and F are based on the Mk37 design.

In 1967, the mod 0s started being refurbished as mod 3, and mod 1 as mod 2. These modifications involved many changes including replacement of magneto-constrictive transducers with piezoelectric ones, and resulted in target acquisition range increased from 700 yd (640 m) to 1,000 yd (910 m) without loss of sensitivity with increasing depth.

For a long time, the Mark 37 was a primary U.S. submarine-launched ASW torpedo. It was replaced by the Mark 48 starting in 1972. The remaining inventory was then rebuilt and sold to several countries, including Israel, as the NT-37C after the vacuum tube guidance systems were replaced by solid-state electronics and the electric propulsion was replaced with a liquid monopropellant.[1]

Note: the Mk 67 Submarine Launched Mobile Mine [2] is based on a Mark 37 torpedo body. It entered service in 1983 and is capable of swimming as far as 10 miles[clarification needed] through or into a channel, harbor, shallow water area and other zones which would normally be inaccessible to the vessel laying it. After reaching the target area it sinks to the sea bed and acts like a conventionally laid "influence mine". The exploder in the Mk 67 warhead is computerised and incorporates magnetic, acoustic and pressure sensors.