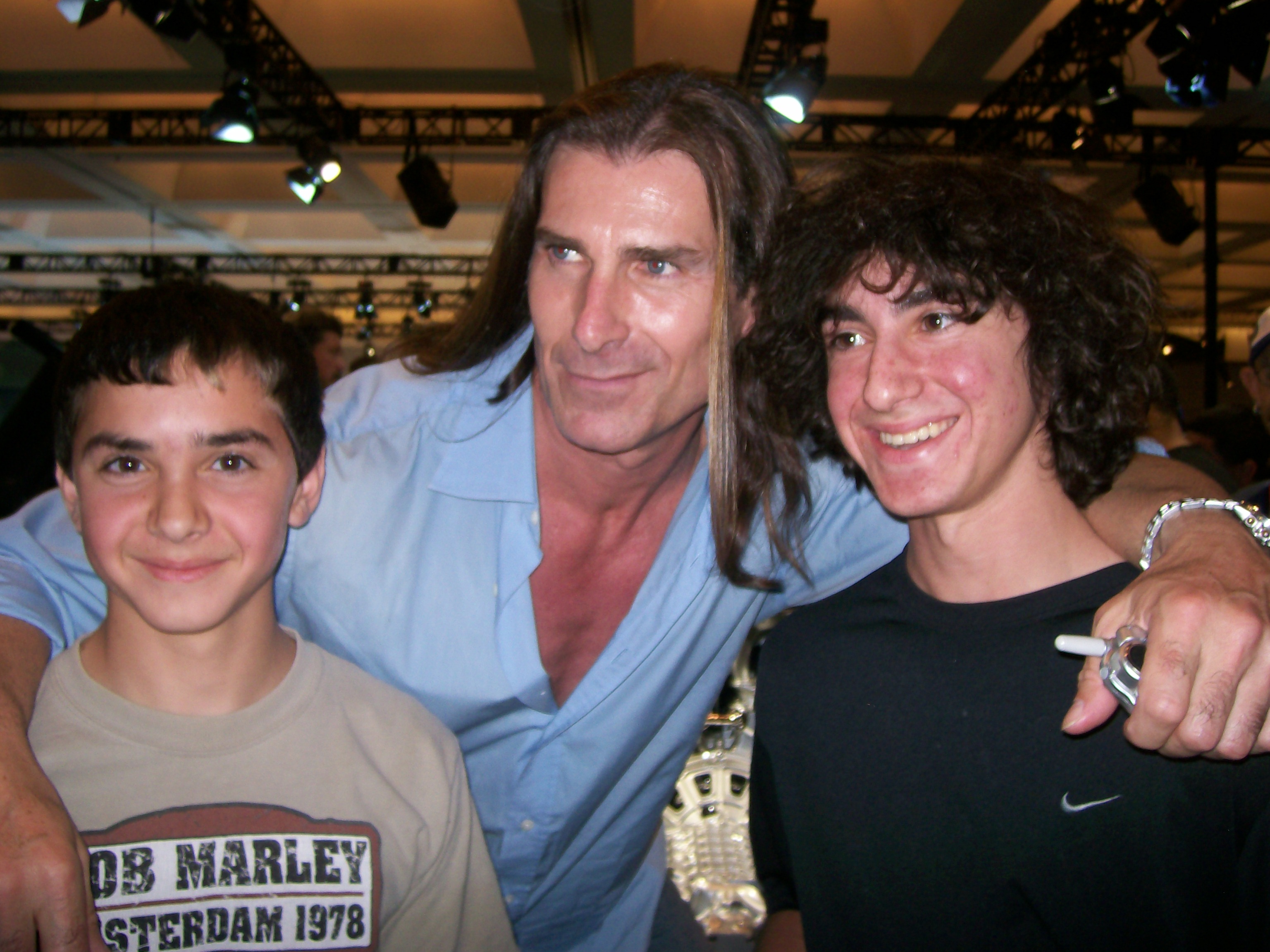 Lanzoni was born in , , the son of Flora (née Carnicelli) and Sauro Lanzoni, a mechanical engineer. [ [http://www.filmreference.com/film/76/Fabio.html Fabio Biography (1959-) ] ] He started as a male model and pornographic film star in Italy, then moved to and became a runway and catalog model for the Ford agency.Fact|date=July 2008 He became famous in the romance world for appearing on hundreds of romance book covers, the first of which was "" in 1987.

He is known among video game enthusiasts for his box cover pose for the NES game "" in 1989. After retiring from modeling in 1991, Lanzoni left New York for the lure of the big screen, where he hoped to follow in the tradition of and as a new action adventure actor. He has also modeled for many authors, including Bertrice Small and Nora Roberts.

In 1992, the William Morris agency's became Fabio's agent, as Fabio became the first male romance writer to "author" romance novels without the use of a . Fabio's books were titled Pirate, Rogue, and Comanche. Fabio then starred in the syndicated TV series "", was featured in calendars, led a fragrance campaign, and landed a role in commercials for "" margarine. Fabio appeared in the "" a number of times, as a close friend of the character . (Fabio and , who played Sally, were close friends in real life.)

In 1999, while riding the inaugural ride of at Busch Gardens Williamsburg, a stray goose flew into his face during the 210-foot drop.

In 2002, Fabio designed and launched a line of women's outerwear that was sold at the division of . The line was launched nationally in 2003 and was featured on many TV shows including , The Insider, , , CNBC’s Business Hour and in print publications including Fortune, People and many local newspapers across the country.

Fabio is a frequent guest on "", where he consistently garners laughs with his quality. He was featured in a series of television spots for I Can't Believe It's Not Butter throughout the 1990s, and returned to the role in 2006 to help promote the "new and improved" spread. On , , Fabio helped crown as the new I Can't Believe It's Not Butter spokesman, though Fabio has hinted that he will not totally be removed from his role in promoting the spread. He has appeared in commercials for "", and was featured in the video for 's 1995 song, "I Kissed a Girl". [ [http://www.westword.com/Issues/1995-08-02/music/backbeat5.html Denver - Music - JILL OUT! ] ] He hosted the show "" on the in 2005, which was called the search for the next Fabio.

During , a advertising campaign debuted featuring Fabio rowing a supposedly promoting a new Fabio brand shampoo. After several cuts back and forth, he finally aged about 30 to 40 years resembling an older, less appealing version of Fabio. The slogan on-screen reads "Life Comes At You Fast". For the Nationwide ad they hired "Jurassic Park"'s famous makeup artists to transform the icon into an older man. [ [http://www.nationwide.com/nw/about-us/our-ads/index.htm Watch Our Ads | Nationwide.com ] ]

In the season finale of 2004's , Gil Hyatt was disgusted to learn that Larissa, the pursued woman in the show, had previously dated Fabio. He appeared to reject Larissa as a result in the final sequences of the episode, kicking at the sand and surf on the beach where they were walking and telling the camera that "every guy would understand" and claiming to be no longer interested in pursuing a relationship with Larissa. [ [http://www.realitytvworld.com/index/articles/story.php?s=2324 Larissa Meek picks pretty boy Gil Hyatt over Brian Worth in 'Average Joe 2: Hawaii' finale - Reality TV World - News, information, episode summaries, message boards, chat and games for unscripted television programs ] ]

He appeared on "" on ABC and "", and is currently guesting in "", as the idol and sidekick of "". In the February 2007 issue of Stuff Magazine, Fabio discussed his interest in audiovisual equipment. "My father was an engineer, so it's in my genes". [http://www.stuffmagazine.com?src=fc]

He appeared on the cover of "Electronic Gaming Monthly" in 1989 to promote "".

On , , Fabio was in a Beverly Hills restaurant altercation with actor , who believed a dinner companion of Fabio's was taking photographs of Clooney.

* 1990: Cameo in the movie "" in which he plays an angel in a dream sequence.
* 1992: Cameo in ' film "" as one of 's bodyguards.
* 1993: he appeared on "" which was then hosted by .
* 1993: Recorded an album entitled "", primarily a spoken word album featuring seductive reading of love advice intermixed with songs by other artists, recorded on .
* 1995: Appeared in 's controversial video for "I Kissed A Girl".
* 1996: Cameo in "Eddie" as himself, catching a referee's toupee which the title character (played by ) throws into the audience at an NBA game.
* 1999: Appeared at when a goose hit his face and left blood coming down his nose. This happened on the opening day of Apollo's Chariot on March 27, 1999.
* 2000: He had a minor part in the movie "". He and a woman kiss in an attempt to out do the protagonist who in turn kiss to the disgust of .
* 2001: had a cameo in the comedy "", during which he was awarded the "Slashie Award" as the best Actor/Model ("and not the other way around") at the .
* 2001: He appeared in the movie "", as the leader of the "Bright and Shiny" cult.
* 2005: he appeared in the Australian show .
* 2005: Fabio appeared on "" "Spring Training" episode to co-host alongside Adam Carolla and Jimmy Kimmel. He was a prize on the Wheel of Destiny for that night. [ [http://www.g4tv.com/themanshow/episodes/4825/Spring_Training.html G4 - The Man Show - Spring Training ] ]
* 2006: He appeared on "" advertising "I Can't Believe It's Not Butter" during one of 's "talk to a regular audience member" segments.
* 2006: he appeared with , host of "", on "" as a "Deal or no Deal" prize for an audience full of servicemen. The entire audience of military personnel were subsequently invited to join him for dinner in the NBC commissary.
* 2006: he appeared in "" Cycle 7 Episode 7, where he posed with the girls for mock-up romance novel covers at the weekly photo challenge.
* 2007: He appeared in the video "Male Model" as himself and as Ian's hero. He was also in Life as Ghosts: Episode 2
* Friday, , : he appeared on 's TV show "" as a member of The Mob.
* Thursday, , : he appeared on "Late Night with Conan O'Brien" advertising "I Can't Believe It's Not Butter" Mediterranean Spread, while joining Max Weinberg and the Max Weinberg 7 as part of the band.
* , : Fabio appeared on "Late Night with Conan O'Brien" to carry Conan from the performance area where he does his over to his desk. When asked what he thought of the monologue, Fabio replied "I can't believe it's not better," clearly a reference to his "I Can't Believe It's Not Butter" ads. Later, he carried guest out from backstage.
* He also appeared on "" as a character in a romance novel.
* He also appeared in season six of Roseanne in the episode: Guilt by Imagination.