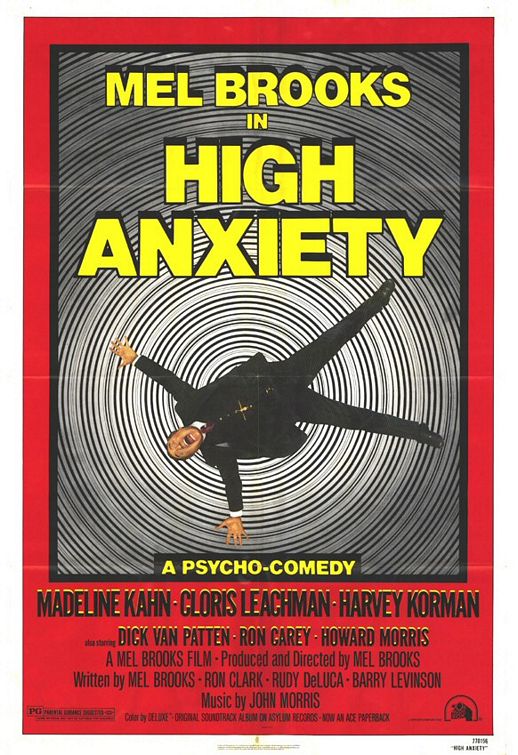 "High Anxiety" is a produced by, directed by, and starring . Veteran Brooks ensemble members , and are also featured.

The film is a of and a to the suspense film genre, most obviously the films directed by , "Vertigo" in particular.

Brooks' character, Dr. Richard H. Thorndyke, arrives as new administrator of the Psychoneurotic Institute for the Very, Very Nervous to discover some suspicious goings-on. When he's framed for murder, Dr. Thorndyke must confront his own , "high anxiety," in order to clear his name.

The story begins at airport, where Thorndyke encounters several odd occurrences. He then leaves for the institute with his driver, Brophy. Upon his arrival, he is greeted by the staff. He has dinner with the staff, and when he goes to his room, a large rock is thrown through the window, saying "welcome, from the violent ward."

He then hears strange noises coming from Nurse Diesel's room, when he and Brophy go to investigate, she claims it is the TV. However, it was a passionate session of with Dr. Montague. The next morning, he is alerted by a light shining through his window. It is coming from the violent ward. When he goes to investigate, it is Arthur Brisbane, a millionaire who now thinks he is a .

Later, Nurse Diesel is talking with Dr. Wentworth. He wants to leave, but she won't let him. However, after some arguing, she says she'll let him go. When Wentworth is driving home that night, his radio blasts music loudly and will not shut off. He is trapped in his car, and he dies from an ear hemorrhage.

After this, Thorndyke goes to the grand - the broad-atriumed, vertigo-inducing Hyatt Regency San Francisco, where he gets a room on the "top floor." He aggravates the bellboy about getting the , wanting to look in the for Dr. Wentworth. He then takes a shower, however the bellboy comes and in a frenzy screams "Here's your paper! Happy now?! Happy!" a reference to Psycho.

After his shower, a woman bursts through the door, her name Victoria Brisbane. The daughter of Arthur Brisbane. She wants help regarding her father. He agrees to the terms, however then finds out Nurse Diesel's plot. The "cocker" is not the real Arthur Brisbane.

To stop him, Diesel and Montague have a killer, "Braces" impersonate Thorndyke and shoot a man in the lobby. Now with the police after him, he must prove his innocence. He contacts Brophy, and realizes he took a picture of the shooting. The real Thorndyke was in the elevator at the time, so he should be in the picture.

He orders Brophy to enlarge the picture. When he goes to call, "Braces" tries to strangle him, however Thorndyke is able to kill him. Brophy enlarges the photo, and Thorndyke is visible in the picture. However, Nurse Diesel and Montague capture Brophy and take him to the North Wing. They also take the real Arthur Brisbane to a tower to kill him.

As Thorndyke runs up the tower to save him, he is able to kill Nurse Diesel and save Brisbane. After this, he and Victoria Brisbane marry.

*Dr. Richard H Thorndyke (): The new head administrator of the Psychoneurotic Institute for the Very, Very Nervous. He suffers from high anxiety and is trying to find out more about the shady dealings going on inside the Institute.

*Victoria Brisbane (): Victoria is the concerned daughter of Arthur Brisbane, an industrialist who was entered into the Institute months ago for a nervous breakdown. She starts a relationship with Dr. Thorndyke at the end. She is often referred to as "The Cocker's Daughter".

*Brophy (Ron Carey): Brophy is Dr. Thorndyke's sidekick. He works as his chauffeur and is a bit of shutterbug. He also has trouble lifting very large objects.
*Nurse Diesel (): Nurse Diesel is the controlling and domineering nurse of the Institute, but is quite a psychopath herself. She is in a relationship with Dr. Montague, and is the puppet master behind the scenes.

*Dr. Montague (): Charles Montague was set to take over the Institute before Dr. Thorndyke arrived, and has trouble hiding his jealousy. He is in a relationship with Nurse Diesel, who treats him like a dog.

*Professor Lilloman (): Often called Professor "Little Old Man", Lilloman was Dr. Thorndyke's teacher from school and currently works as a consultant at the Institute. He has the unfortunate tendency to appear dead while asleep, a quirk that "scares the hell out of everyone." He is helping Dr. Thorndyke with his high anxiety.

*Arthur Brisbane: A very rich industrialist and Victoria's father. He was entered into the Institute nearly a year ago, yet Nurse Diesel and Dr. Montague have been keeping him there because of how much money Victoria is paying them. Currently, they replaced him with a man who thinks that he's a dog. Because he was replaced by a man who thought he was a dog, other characters have called his daughter Victoria "The Cocker's Daughter".

*Braces: The man with the braces was hired to frame Thorndyke and later to kill him. He killed Dr. Ashley and Dr. Wentworth. He has a very high love of killing and lets people know it.

*Dr. Wentworth (): Wentworth knew about what was going on at the Institute, and this weighed down on his conscience so much he left, but Nursel Diesel worried that he might talk, so she had Braces kill him. Braces rigged his car radio to play a very loud and annoying song that wouldn't shut off, and the strain it caused on Dr. Wentworth's body trying to make it stop caused a cerebral hemorrhage.

*Dennis: A rather tightly-wounded bellhop who was constantly reminded to get Dr. Thorndyke his newspaper to the point of him attacking the doctor in the shower with the aforementioned paper.

*Dr. Ashley: Dr. Thorndyke's predecessor at the Institute was killed before he had a chance to make some "big changes". He is referenced throughout the film but is never actually seen, having died of a heart failure - caused somehow by Braces - before the beginning of the film.

These films are spoofed or parodied in the movie:

* "Spellbound" — Hitchcock's film about an insane asylum, the basic source of the plot. The "High Anxiety" joke in which the main characters find Professor Lilloman apparently dead in a chair, only to have him wake up, is a take on a similar situation in "Spellbound".

* "Vertigo" — same setting at the base of the , same bell tower location, similar movie poster graphics, and gives the main character his condition, Victoria Brisbane wears a gray suit similar to the one Madeleine Elster wears.

* "Psycho" — shot-by-shot parody of the famous shower scene; the closing shot - a zoom out from a hotel room - is a reverse of Psycho's opening shot; also the suspenseful soundtrack is similar. The bellhop's high-pitched screams of "Here! Here! Here!" mimic the screeching violins of Hitchcock's shower-murder scene.

* "The Birds" — also partially set in San Francisco, the jungle-gym scene is parodied.
* "" — main character's name is a take-off of Roger O. Thornhill, but unlike Thorndyke, Thornhill never reveals his middle name; at one point Thorndyke tells Victoria to meet him in the North by Northwest corner of a park.

* "" — The Professor Lilloman is similar to Professor Gustav Lindt, the German scientist.

* "The Ring" — In fighting for his high anxiety under hypnosis Thorndyke and Lilloman engage in a boxing fight.

* "" — When Victoria comes in the hotel room, she asks to move from the door and window, and close the drapes; She then kisses him when someone comes in, similar to the train situation.

* "" — Prior to Wentworth's death the lattice work of the window throws a shadow like a spider's web behind him.

* "" — the struggle in the phone booth is similar to the struggle has in "Dial M": She is nearly strangled and all the opposite end can hear are the fighting noises. Also, the character causing the struggle gets stabbed in both cases through the back (or in the back). The pictures on the wall of Professor Lilloman's office are another allusion.

* "" — Thorndyke hides in the park and calls from the payphone.

* "" — Car sabotage by radio being played too loud.

* "" — A scene with Nurse Diesel and Montague where the camera is below a glass table, and they keep putting tea items down on the table in the camera's way parodies the glass floor/ceiling technique Hitchcock used to show Novello's "Lodger" pacing back and forth.

Montague uses the alias of "Mr. McGuffin" to switch Thorndyke's room at the hotel from the 2nd to the 17th. A is a plot device that advances the story but has little other significance. The term was popularized by Hitchcock.

* "The Cobweb" — setting, references to changing the drapes.

* "Duel" - Shortly before his death, Wentworth is overtaken by a large freighter truck in a manner similar to David Mann's first encounter with the tanker.

* "One Flew Over the Cuckoo's Nest" — Nurse Diesel's name and bosom are in reference to Nurse Ratched.

* "The Wizard of Oz" — when Nurse Diesel falls to her death she is holding a broom and cackles like the Wicked Witch.

* Three of the film's writers appear in comical supporting roles: as the deranged patient Zachary Cartwright, as the killer "Braces," and ""-director as the tightly-wound bellhop, "Dennis."

* This movie was dedicated to , who loved this film enormously and went as far as to send Brooks a bottle of champagne [ [http://www.imdb.com/title/tt0076141/trivia High Anxiety Trivia] at Imdb] .

* In "The Birds" scene, spinach dip was flung at Mel Brooks, as the pigeons could not be made to on command.

* The character Brophy is played by Ron Carey as an impression of character actor , who specialized in playing comic sidekicks.

* One of Brooks' comic schticks was an impression of , whom he employed to sing the film's theme song.

* One scene is set in the in San Francisco, in the uniquely configured 22-story-high triangular atrium of the hotel.

* This is Brooks' first film as a producer and first "speaking" lead role (his first lead role was in ).

* In Mel Brooks' film where we first see Maid Marion, she is singing in the bathtub. She is suddenly interrupted by a camera breaking through a the bathroom window, which was positioned outside the castle. The zooming camera, meant to set up a beautiful scene of a beautiful Maid Marion, does not stop zooming and breaks the window. The camera then slowly backs away, obviously realising it went too far into the window. This is a homage to the final scene in the Hotel room in High Anxiety, where the camera is zooming away from the happily married couple, only to smash through the wall that was 'apparently' behind it.