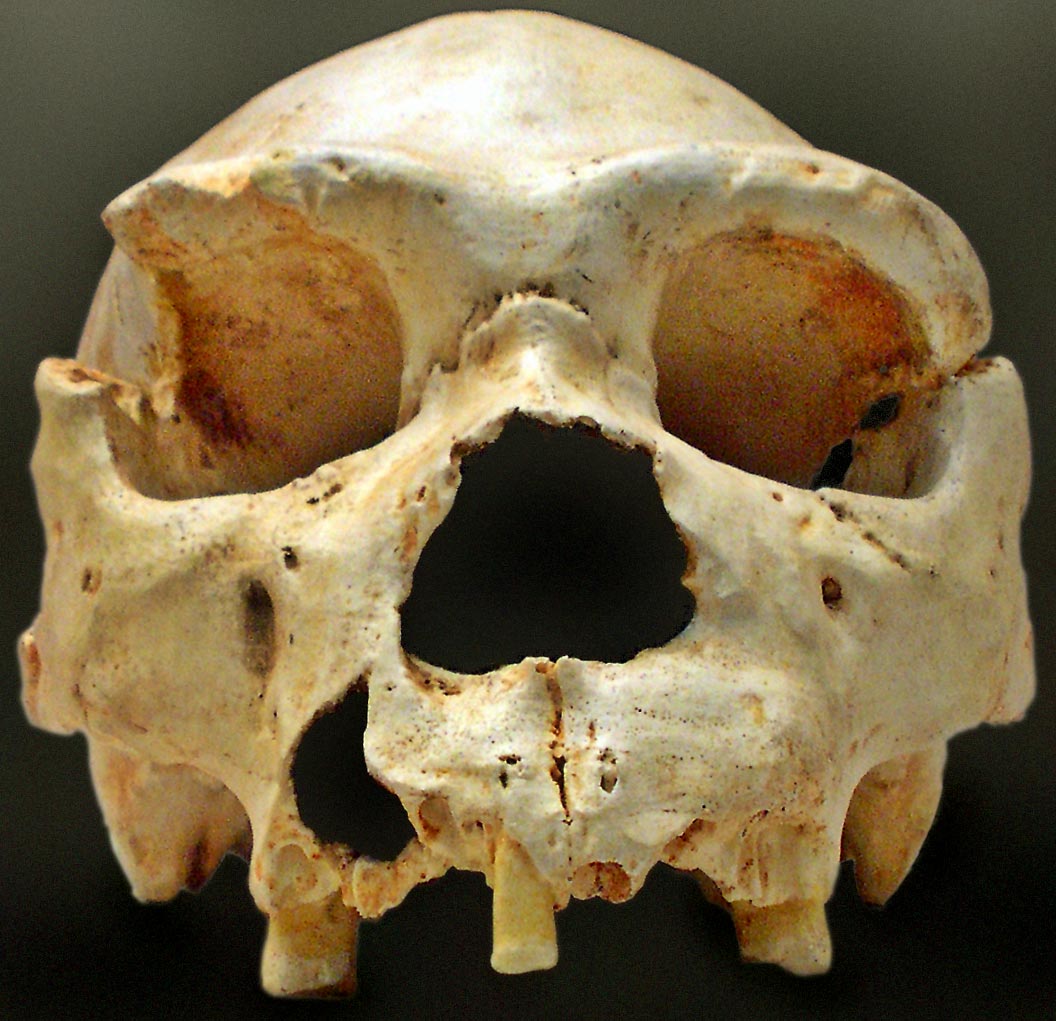 "Homo heidelbergensis" ("Heidelberg Man") is an of the "Homo" which may be the direct ancestor of "" in . The best evidence found for these hominins date between 600,000 and 400,000 years ago. "H. heidelbergensis" stone tool technology was considerably close to that of the tools used by "".

Both "" and "H. heidelbergensis" are likely descended from the morphologically very similar "" from Africa. But because "H. heidelbergensis" had a larger brain-case &mdash; with a typical cranial volume of 1100-1400 cm³ overlapping the 1350 cm³ average of modern humans &mdash; and had more advanced tools and behavior, it has been given a separate species classification. The species was tall, 1.8 m (6 ft) on average, and more muscular than modern humans.

According to the "Recent Out of Africa" theory, similar "Archaic "Homo sapiens" found in (ie. "" only 160,000 years old), existing in Africa as a part of the operation of the Saharan pump, and not the European forms of "Homo heidelbergensis", are thought to be direct ancestors of modern "".

In theory recent findings in also suggest that "H. heidelbergensis" may have been the first species of the "Homo" genus to bury their dead, but that is contested at this time. Some experts believe that "H. heidelbergensis", like its descendant "H. neanderthalensis" acquired a primitive form of language. No forms of art or sophisticated artifacts other than stone tools have been uncovered, although , a mineral that can be used to create a red pigment which is useful as a paint, has been found at excavations in the south of France.

Cut marks found on wild , s, rhinos and s demonstrate that they were butchered, some of the animals weighed as much as 700 kg (1,500 lb) or possibly larger. During this era, now-extinct wild animals such as s, s and roamed the European continent.

Moreover, a number of 400,000 year old wooden projectile spears were found at in northern Germany. These are thought to have been made by "" or "Homo heidelbergensis". Generally, projectile weapons are more commonly associated with "H. sapiens". The lack of projectile weaponry is an indication of different sustenance methods, rather than inferior technology or abilities. The situation is identical to that of native New Zealand Maori - modern "Homo sapiens", who also rarely threw objects, but used spears and clubs instead. [Schwimmer, E.G. "Warfare of the Maori." "Te Ao Hou: The New World", #36, Sept 1961, pp. 51-53. [http://teaohou.natlib.govt.nz/teaohou/issue/Mao36TeA/c29.html] ]

The first fossil discovery of this species was made on October 21, 1907 and came from Mauer where the workman Daniel Hartmann spotted a jaw in a sandpit. The jaw () was in good condition except for the missing premolar teeth, which were eventually found near the jaw. The workman gave it to professor from the , who identified and named the fossil.

In 1994 British scientists had unearthed a lower hominin tibia bone just a few s away from the including hundreds of ancient hand axes at the site. A partial leg bone is dated to 478,000 and 524,000 years old. "Homo heidelbergensis" was the early proto-human species that occupied both and at that time; both locales were connected by a landmass during that epoch. Prior to , Boxgrove offered the earliest hominid occupants in Europe.

The tibia had been gnawed by a large carnivore, suggesting that he had been killed by a lion or wolf or that his unburied corpse had been scavenged after death [A History of Britain, Richard Dargie (2007), p. 8-9] .

Beginning in 1997, a Spanish team has located more than 5,500 human bones dated to an age of at least 350,000 years old in the Sima de los Huesos site in the Sierra de in northern Spain. The pit contains fossils of perhaps 28 individuals together with remains of and other carnivores and a called "". It is hypothesized that this axe made of red quartzite to be some kind of ritual offering for a funeral. Ninety percent of the known Homo heidelbergensis remains has been obtained from this site. The fossil pit bones include:
*A complete cranium (Skull 5), nicknamed "", and fragments of other craniums, as Skull 4, nicknamed "Agamenón" and skull 6, nicknamed "Rui" (from , a local hero).
*A complete (Pelvis 1), nicknamed Elvis, in remembrance of .
*Mandibles, teeth, a lot of postcranial bones (s, hand and foot bones, vertebrae, ribs, etc.) Indeed, nearby sites contain the only known and controversial "" fossils.

Some believe that "H. heidelbergensis" is an extinct species, some that is a cladistic ancestor to other Homo forms sometimes improperly linked to distinct species in terms of populational genetics.