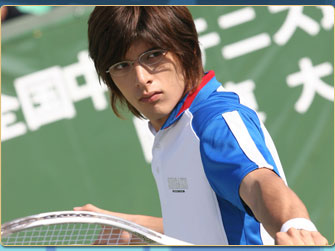 caption =
birth_date =birth date and age|1985|12|26
birth_place =
occupation =,
Associated_acts =
salary =
networth =
website = http://blog.watanabepro.co.jp/shirotayu/ Shirota's
footnotes =
yearsactive = 2004&ndash;presentnihongo|Yuu Shirota|城田 優|Shirota Yū, born , , is a Japanese-Spanish actor and singer. He is known most notably for his role as in the "" musical series, , and in the live film adaptation, and for his role as in the , also as Kagurazaka Mokoto in live-action drama "". He was also part of a young men's stage acting troupe, , which perform in various skit-like performances, until June 27, 2008, when he announced his graduation during the encore for the D-Stage Volume 2 play.

Shirota was born on , to a Japanese father and a Spanish motherFact|date=April 2008.Shirota lived in , since he was three to about seven years, for a total of nearly five years. He returned to Japan for elementary school and can still speak Spanish in ordinary conversation.

He attended high school at Horikoshi High along with member , 's , Japanese actor and singer and 's

According to Shirota, when he was little, his family liked to sing songs, so he would borrow his older sister's keyboard, while his mother taught him piano. Thus spawned Shirota's love for composing. He composed his first piece when he was in the fourth grade, titled the "The Tear". From his [http://www.mmv.co.jp/products/flyer/tennis_musical/play/dreamlive_3rd/closeup/04.html Prince of Tennis Musical Interview]

He has also appeared in various numbers of commercials, commercial videos, TV shows, musicals, and movies.

Shirota's appeared in 's 2002 "Stay With You" music video and MISIA's 2003 "In My Soul" music video. In September 2006, he, along with fellow D-Boy member, , appeared in the music video for RAG FAIR's "Kimi no Tame ni Boku ga Tate ni Naro", playing a young man planning to propose to his girlfriend.

Shirota's appeared on a radio show on FM Osaka 851, performing live on , .

In October 2004, Shirota joined the [http://www.watanabepro.co.jp/ Watanabe Entertainment] group, the .

As a member of the D-Boys, Shirota also keeps a [http://blog.watanabepro.co.jp/shirotayu/ blog] , which he updates regularly.

Being a part of the provided Shirota with a lot of opportunities. Among them was to perform with the group of boys and expand his experience as a performer.

He's also hosted a radio show called " [http://www.mmv.co.jp/mrv/ "Marvelous Radio Vibration"] " with fellow D-Boys member, and Yukki. The show aired on , and ended its run on , .

The D-boys have also starred in their own drama documentary variety show called, "DD-Boys"

In June 2007, the D-Boys starred in their very own musical together called, "D-BOYS STAGE",

From 2003 to 2004, Shirota became the 7th actor to play (Tuxedo Mask) in the . His first official performance as was on , 2003, in the "2003 Winter Special Mugen Gakuen - Mistress Labyrinth (Kaiteiban)". He also demonstrated his ability to play acoustic guitar on stage live, during the "Starlights - Ryuusei Densetsu" performances.

The "2004 New Legend of Kaguya Island" was Shirota's last performance as . That night, on , , after he performed his final rendition of "Prince of Earth", he announced his graduation from the role and received flowers from who had previously played in the original "1999 Kaguya Island" musical.

As Kunimitsu Tezuka in The Prince of Tennis Musicals

After his role as , Shirota won the role of , the stoic captain of Middle School's tennis club, in "" musicals series, . From 2005 to 2006, he became the third actor to play Tezuka as a member of the second generation Seigaku cast. He made his first debut as Tezuka on , in the "Side Yamabuki" performance in . That same year, his role as Tezuka was carried into the live adaptation film of the manga. During his run in the musicals, he was able to work with fellow members , , , , , , and .

He released a Best Actor's album in 2005, for his role as Tezuka, called "The Prince of Tennis Imperial Match Hyotei Gakuen: Best Actor's Series 001 - Yuu Shirota as Kunimitsu Tezuka"

On , , in the Dream Live 3rd Live concert, he along with the majority of the second generation Seigaku cast, graduated from their roles. Since his graduation, the role of Tezuka has been played by and currently by .

As Kunimitsu Tezuka in The Prince of Tennis Live-Action Film

Shirota was able to carry on his role from the musicals to the live-adaptation film of the manga series, "". Along with most of the principal cast members for the Regulars, he was able to reprise his role in the movie. The only major casting change was as , the main protagonist.

"The Prince of Tennis" was released on , and opened on the tenth spot in the Japanese Box Office and marked Shirota's first major film appearance.

After Shirota's movie, the "June Bride"

In 2007, after nearly a year away from musicals, Shirota starred as Anthony Hope, the cheerful young sailor in the Japanese stage production of "Sweeney Todd"

The next project Shirota was involved in before 2006 ended was the TV drama, "nihongo|Dignity of Haken|ハケンの品格|Haken no Hinkaku",

Shirota next appeared in his second TV drama appearance, in the April 2007 drama, "nihongo||生徒诸君|",

In his third TV drama role of the year, Shirota appeared in the popular adaptation of "Hanazakari No Kimitachi He

2007 has also seen Shirota in a string of films. The first being "nihongo|Arakure KNIGHT|荒くれＫＮＩＧＨＴ|",

The second of his three films, Shirota played a main supporting actor in the film, "nihongo|Waruboro|ワルボロ|

Shirota is currently starring in The Rookies, a baseball J-drama based on the manga of the same name by Morita Masanori. He plays Shinjo Kei, a juvenile delinquent and one of the members of the baseball club, whose new coach is trying to reform. The series was first aired on April 19, 2008, and is currently ongoing. For this role, Shirota had his hair bleached blonde.

On , , Shirota released an Idol DVD called "With U".

In , , he released his "first solo photobook collection".

Shirota appears regularly in many magazines and journals. In January 2007, Wink up Magazine (Wanibooks) started a monthly column written by Shirota. This column is titled "How are you?" and usually features one picture taken by Shirota.

In April 2006, Shirota experienced [http://www.wintechjapan.com/diary/index.html language study studying abroad] for 1 week in the Australian gold coast. His experiences were recorded in the [http://home.alc.co.jp/db/owa/sp_item_detail?p_sec_cd=31&p_item_cd=7006028 Language Study studying abroad 2007] journal series and covered in detail over 13 pages of his thoughts after the experience and the return home.

In June 2006, he then visited New York to see five Broadway musicals: "The Producers", "Rent", "Spelling Bee", "Sweeney Todd", and "The Phantom of the Opera".

He, with , also attended the opening night for the "Advancement Side Rokkaku feat. Hyotei Gakuen" of Tenimyu on , , to support and .

His older brother by a year, Jun Shirota, designs and models for the collection, [http://www.janji.jp/index.html Janji] and is also a member of the band, [http://www.alma.vc/index.html Alma] .