Day's Lock is a lock on the River Thames near Dorchester-on-Thames, Oxfordshire, England on the Dorchester side of the river.

The pound lock was built in 1789 by the Thames Navigation Commissioner. The lock is across the river from the small village of Little Wittenham and is overlooked from the south by the hills of Wittenham Clumps, with a particularly good view from Round Hill.

The weir runs straight across the river from the other side of the lock island.

Day's Lock is the main gauging station for the measurement of the water flow in the River Thames.

The World Poohsticks Championships, on behalf of the RNLI, have taken place annually here since 1983.

The name Day's Lock comes from the Day family, local Catholic yeomen since the 17th century. During the 16th century, there was a flash lock here. The pound lock was staked out in August 1788. It was judged best to build it on the Oxfordshire bank provided the existing weir owner would "remove his bucks"(eel traps). In 1865 it was reported to be in utter ruin and dangerous, but reconstruction did not take place until 1871. In 1882 a bell push to summon the keeper was installed, there being no lock keeper's house at that time.[2] The lock house was not built until 1928 when it was erected on Lock House Island next to Little Wittenham Bridge.

Reach above the lock 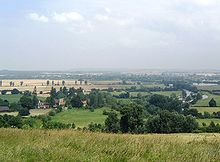 View from Round Hill. Day's Lock and the River Thames curving along the tree line to the left

On the eastern bank to the north-east is the historic town of Dorchester with its ancient Abbey. The river follows a long bend round to Clifton Hampden. Here it goes under Clifton Hampden Bridge and past the historic Barley Mow public house, as mentioned in the book, Three Men in a Boat. Before Clifton Lock, the old stream separates, leading to Long Wittenham.

There are navigation transit markers upstream of the lock to allow boats to check their speed. A powered boat should take more than one minute to pass between the markers. 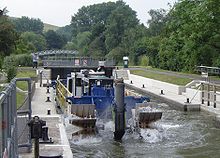 A paddle-driven river management craft enters the lock from upstream. Round Hill and Little Wittenham Bridge are in the background