In Europe, Europe Day is an annual celebration of peace and unity in Europe. There are two separate designations of Europe Day: 5 May for the Council of Europe, and 9 May for the European Union (EU).[1] For the EU, the day is also known as Schuman Day, commemorating the historical declaration by French foreign minister Robert Schuman.[2]

The Council of Europe's day reflects its own establishment in 1949, while the European Union's day celebrates the day the EU's predecessor was proposed in 1950. Europe Day is one of a number of European symbols designed to foster unity among Europeans.

The Council of Europe was founded on 5 May 1949, and hence it chose that day for its celebrations when it established the holiday in 1964. In 1985, the European Communities (which later became the European Union) adopted the European symbols of the Council of Europe such as the Flag of Europe. However, the Community leaders decided to hold their Europe Day in commemoration of the Schuman Declaration of 9 May 1950. The declaration proposed the pooling of French and West German coal and steel industries, leading to the creation of the European Coal and Steel Community, the first European Community, and hence is considered a principle founding moment. Hence, at the 1985 Milan European Council, 29 September was adopted as the EU's flag day.

The European Constitution would have legally enshrined all the European symbols in the EU treaties, however the treaty failed and usage would continue only in the present de facto manner. The Constitution's replacement, the Treaty of Lisbon, contains a declaration by sixteen members supporting the symbols.[3] The European Parliament formally recognised the 9 May holiday in October 2008.[4] 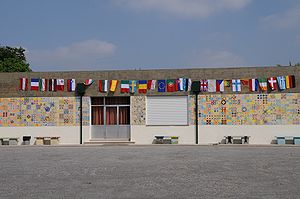 A school in Portugal decorated for Europe Day

9 May is celebrated in various forms in most member states of the European Union and surrounding countries such as Turkey.[5] Due to the political nature of the day, it sees attempts at teaching people about the European Union and speaking in support of European integration.[6] The flag as another symbol plays a major role in general celebrations. Despite a preference for 9 May, with the European Union's greater visibility, 5 May is still observed by some Europeans due to the Council's role in seeking to defend human rights, parliamentary democracy and the rule of law. In contrast, the Schuman declaration was merely proposing the pooling of French and German coal and steel. Furthermore, 9 May coincides with Victory Day, the end of World War II in the former Soviet Union (celebrated on 8 May in western Europe).