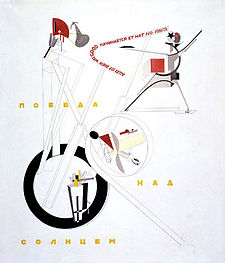 El Lissitzky's poster for a post-revolutionary production of the drama Victory Over the Sun. The multilingual caption reads: All is good was good is beginning and has not ended.

Russian Futurism is the term used to denote a group of Russian poets and artists who adopted the principles of Filippo Marinetti's "Manifesto of Futurism". Russian futurism may be said to have been initiated during December 1912, when the Moscow-based literary group Hylaea (Russian: Гилея [Gileya]) (initiated during 1910 by David Burlyuk and his brothers at their estate near Kherson, and joined quickly by Vasily Kamensky and Velimir Khlebnikov, with Aleksey Kruchenykh and Vladimir Mayakovsky joining during 1911[1]) issued a manifesto entitled A Slap in the Face of Public Taste. Although Hylaea is generally considered to be the most influential group of Russian Futurism, other groups were formed in St. Petersburg (Igor Severyanin's Ego-Futurists), Moscow (Tsentrifuga, with Boris Pasternak among its members), Kiev, Kharkov, and Odessa.

Like their Italian counterparts, the Russian Futurists were fascinated with the dynamism, speed, and restlessness of modern machines and urban life. They purposely sought to arouse controversy and to gain publicity by repudiating the static art of the past. The likes of Pushkin and Dostoevsky, according to them, should be "heaved overboard from the steamship of modernity". They acknowledged no authorities whatsoever; even Filippo Tommaso Marinetti — when he arrived in Russia on a proselytizing visit during 1914 — was obstructed by most Russian Futurists who did not profess to owe him anything.

In contrast to Marinetti's circle, Russian Futurism was primarily a literary rather than plastic philosophy. Although many poets (Mayakovsky, Burlyuk) dabbled with painting, their interests were primarily literary. However, such well-established artists as Mikhail Larionov, Natalia Goncharova, and Kazimir Malevich found inspiration in the refreshing imagery of Futurist poems and experimented with versification themselves. The poets and painters collaborated on such innovative productions as the Futurist opera Victory Over the Sun, with music by Mikhail Matyushin, texts by Kruchenykh and sets contributed by Malevich.

Members of Hylaea elaborated the doctrine of Cubo-Futurism and assumed the name of budetlyane (from the Russian word budet 'will be'). They found significance in the shape of letters, in the arrangement of text around the page, in the details of typography. They considered that there is not any substantial difference between words and material items, hence the poet should arrange words in his poems like the artist arranges colors and lines on his canvas. Grammar, syntax, and logic were often discarded; many neologisms and profane words were introduced; onomatopoeia was declared a universal texture of verse. Khlebnikov, in particular, developed "an incoherent and anarchic blend of words used without meaning for their sound alone"[1], known as zaum. 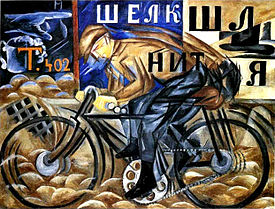 With all this emphasis on formal experimentation, some Futurists were not indifferent to politics. In particular, Mayakovsky's poems, with their lyrical sensibility, appealed to a broad range of readers. He vehemently opposed the meaningless slaughter of the Great War and hailed the Russian Revolution as the end of that traditional mode of life which he and other Futurists ridiculed so zealously.

After the Bolsheviks gained power, Mayakovsky's group — patronized by Anatoly Lunacharsky, Lenin's minister of education — aspired to dominate Soviet culture. Their influence was paramount during the first years after the revolution, until their program — or rather lack thereof — was subjected to scathing criticism by the authorities. By the time OBERIU attempted to revive some of the Futurist tenets during the late 1920s, the Futurist style in Russia had already ended. The most militant Futurist poets either died (Khlebnikov, Mayakovsky) or preferred to adjust their very individual style to more conventional requirements and trends (Aseyev, Pasternak).