Operation Grapple, and operations Grapple X, Grapple Y and Grapple Z, were the names of British nuclear tests of the hydrogen bomb. They were held 1956—1958 at Malden Island and Christmas Island in the central Pacific Ocean. Nine nuclear detonations took place during the trials, resulting in Britain becoming a thermonuclear power. All of the bombs were exploded in the air, rather than on the surface, to reduce the effects of fallout.

Untested and unproven thermonuclear designs being developed at Britain's nuclear weapons research establishment, the AWRE, required proof testing, so Grapple was conducted as a massive tri-service operation, the largest of its kind since World War II. Initial preparation for the operation, including establishing necessary infrastructure on Christmas Island, began at the end of May 1956. About 1,200 civilian and military personnel were stationed on Christmas Island during that year.

Initial landings were from the Bibby Line troopship Devonshire which had sailed from the Far East and embarked servicemen at Suva, Fiji, who had been flown from the United Kingdom by commercial airlines. From early October, following the rebuilding of the island's main runway, the majority of arrivals were directly from the United Kingdom, via Hawaii, using Qantas chartered Super Constellation aircraft. Departures of the first arrivals started early June 1957, using the same Qantas arrangement to Hawaii.

While Christmas was the main base, three other locations featured as key elements of the operation. Malden Island, about 200 miles south of Christmas Island was the site for the air-dropped tests, and Penrhyn Island, a further 200 miles south was used as a monitoring site and weather station. Air support for the operation was generally routed through Hickam Air Base on the Hawaiian Islands to the north, where a support group was located.

Supplies for the island were shipped primarily from the southern hemisphere, Australia and New Zealand, by freighters of the Royal Fleet Auxiliary (RFA). The Royal Navy established a water processing plant early in the operation, which provided adequate supplies of drinking water and semi-salt water for showering.

The first trial was Grapple, also known as Grapple 1. All of these nuclear bombs were dropped and detonated over Malden Island. The first test of this trial was code-named Short Granite. It was a two-staged nuclear weapon that had a predicted yield of about one megaton. The bomb was dropped by a Vickers Valiant XD818,[1] piloted by Kenneth Hubbard, off the shore of Malden Island on 15 May 1957.

Weighing about 4,545 kg, the bomb exploded with a force of 300 kilotons, a yield far below the prediction. Despite this, Britain hailed the test as a successful thermonuclear explosion and announced to the world it had become a thermonuclear power. While the result was disappointing, the AWRE scientists learned valuable information regarding radiation implosion.

The next test was Orange Herald. This was a large fission bomb which was hoped to arm a future ballistic missile. The bomb was dropped and detonated by a Valiant on 31 May 1957. It exploded with a force of 720 kilotons. The yield was the largest ever achieved by similar bomb designs. This bomb was hailed by the government as a new type of hydrogen bomb and the fact that it was a fission bomb was kept secret by the government until the end of the Cold War. A 0.4MT giant atom bomb code-named Green Grass was derived from Orange Herald and deployed during the period before an H-bomb became available.

The last shot of Grapple was Purple Granite. This was a last minute addition to the operation and was hoped to give an improved yield over Short Granite. The bomb was detonated on 19 June 1957 with a 200 kiloton yield.

There were other designs that were not tested: Green Bamboo was a single stage thermonuclear bomb similar to the Soviet Joe-4, and Orange Herald (large) was a "political bomb": a large fission bomb that was not suitable for use as a weapon but was certain to give a high yield ensuring that Britain would not appear as a failed nuclear power.

The two Granites and Green Bamboo were designed to achieve high yields by using the Li-6 D/U-238 cycle rather than the large scale fusion of deuterium achieved at Grapple-Y. 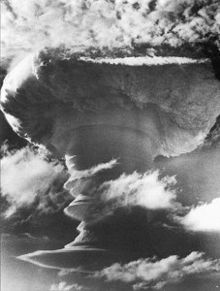 Following the disappointing results of the first Grapple trial, Grapple X was conducted at Christmas Island. For Grapple X, the bombs would be exploded over Christmas Island instead of Malden Island to save time and money.

With the experience and knowledge gained from the first Grapple trial, the scientists had developed a new hydrogen bomb design with a 50 percent more powerful fission primary stage and a simplified thermonuclear secondary. Grapple X was dropped and detonated over the southern end of Christmas Island on 8 November 1957. The two-stage thermonuclear bomb exploded with a force of 1.8 megatons. This was close to being the real hydrogen bomb Britain wanted, but used a relatively large quantity of (expensive) highly enriched uranium.

The explosion did some damage to the island, resulting in demolished buildings and damaged infrastructure. This damage was due to the high yield of the test, which was not expected.

Grapple X was spectacularly successful, exceeding the predicted yield of one megaton by 80 percent. Britain became a true thermonuclear power with the detonation of Grapple X.

Grapple Y sought to develop a more efficient thermonuclear bomb based on the successful Grapple X design. Like Grapple X, only one detonation was conducted during Grapple Y. The bomb was detonated off Christmas Island on 28 April 1958. The bomb achieved a yield of three megatons and was the largest British nuclear test ever conducted. [2]

The Grapple Y design was notably successful because much of the yield came from thermonuclear reactions instead of fast fission yield from the uranium tamper making it a true H-bomb by any standards, and because the yield was exactly as predicted indicating that its designers understood what they were doing.

With a nuclear testing moratorium quickly approaching, Grapple Z was conducted at Christmas Island in mid-1958. This was a four-shot series and the largest of the four Grapple trials. Grapple Z sought to develop lighter nuclear warheads as well as weapons that were radiologically hardened meaning they would not predetonate if exposed to radiation from other nuclear weapons. Two of the tests were fission devices tested for development of the primary stage of a two-stage device.

The first shot, codenamed Pendant, was detonated on 22 August 1958. Rather than being dropped by an aircraft, the bomb was suspended from a string of four vertically-stacked barrage balloons. Pendant had a 24 kiloton yield and used solid fusion boosting with lithium deuteride. [2] The next shot, Flagpole, was airdropped over Christmas Island on 2 September 1958. It was a smaller version of the bomb exploded at Grapple Y and exploded with a yield of 1.2 megatons. This test was followed by Halliard 1 (11 September 1958) an unusual three-stage bomb with two fission components and one thermonuclear component which achieved its predicted yield of 800 kilotons and was radiologically immune despite not using boosting. The final test was Burgee (23 September 1958), another balloon shot which was fusion boosted with tritium gas and achieved a yield of 25 kilotons.

Grapple Z was the last atmospheric nuclear testing trial conducted by Britain. [2] The result of it was that Britain had demonstrated all of the technologies needed to make a one megaton H-bomb that weighed no more than one ton and was immune to radiation from nearby nuclear weapons.

Cooperation with the USA

The practical result of the British H-bomb project (in conjunction with other political events [3]) was that the United States became willing to enter into the 1958 US-UK Mutual Defence Agreement. This put an end to Britain's independent nuclear weapons system in favour of ones closely based on American designs. The benefit to Britain was that this was much cheaper than developing their own design for a weapon that could be made in large numbers and put into service. An additional benefit was that Britain was able to buy highly enriched uranium and sell plutonium—a trade that was useful to both and profitable for Britain. The Americans, to their surprise, also benefited by access to information where Britain was technically ahead including details of explosives and electronics, and experience in designing weapons without large numbers of tests.

While the thermonuclear designs tested during Grapple were successful, they were not put into service by Britain. Their useful effect was to greatly increase the quality of information that America was willing to share, and to develop the knowledge needed to use that information successfully.

In 2005, a Massey University study in New Zealand concluded that sailors from the Royal New Zealand Navy, Royal Navy and Fijian Navy who observed the tests from nearby ships later suffered adverse health effects from exposure to radiation fallout, including cancer and genetic abnormalities in the veterans' children. A class action lawsuit was filed against the British Ministry of Defence by various veterans' organisations following the publication of the study. [4][5][6]

The Ministry of Defence maintains that few people were exposed to any radiation or contamination at all, and that studies had shown little or no health effects.[7][8] An analysis of illnesses in veterans of Grapple and other weapons tests produced statistics that are hard to interpret. The veterans showed rates of illness that were slightly higher than the control group, but the control group had lower rates of illness than the population as a whole while the veterans had rates that were about the same. Neither of these results has a clear explanation.[9] Reliable statistical analysis of the data is difficult because the samples are fairly small and incomplete.