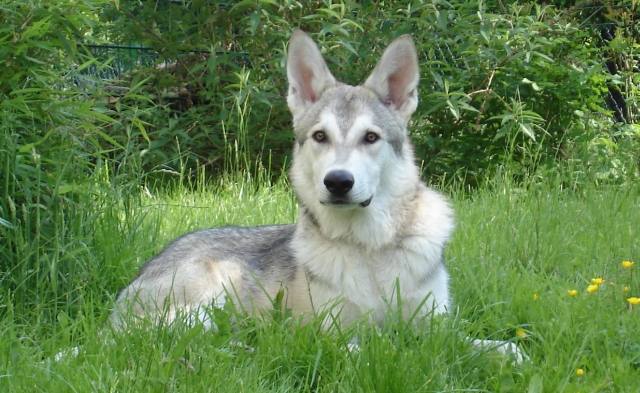 In 1921, Dutch started crossbreeding a male to a female (Canis lupus lupus). He aimed for an improved version of the German Shepherd Dog which was immune to distemper, and succeeded insofar that the Saarlooswolfdog we know is a strong imposing dog, but they kept their wolflike characteristics; they are cautious, reserved and lack the ferocity to attack; it is not the dog that Leendert Saarloos hoped to get. His theory was also proven wrong, as nearly all the first generation hybrids succumbed to distemper. Until he died in 1969 Leendert Saarloos was in full control over the breeding of his "European ". The recognized the breed in 1975. To honor its creator they changed the name to "Saarlooswolfdog". In 1981 the breed was recognized by the (FCI). In the past, some Saarlooswolfdogs were trained as guide dogs for the blind and rescue dogs.They are very rare and purebreds can cost up to $2,000.

The Saarloos is a fairly large dog, up to 30 inches at the shoulder and weighing up to 100 lbs. The muzzle is wide, and the ears pointed and held erect. It is an athletic dog in build, with medium bone, and a strong and muscular body. Their coat is short and dense, providing superb protection from the weather. Usually the colour of the wolf's coat, however it can vary between Black, Tan, Red, White, Silver, or Blue. The Saarloos has wolf-like expressions, as well as a wolf-like head.

The Saarlooswolfhound is a breed for experienced dog owners, due to its size and strength. It is a bold and daring dog, this is not a dog for first time owners; It needs a lot of exercise, as it doesn't tire easily. Apartment life is not appropriate for this breed. The Saarloos does best in country or suburban surroundings. Owners must establish the dominant alpha position because the animal needs a strong alpha leader and a social atmosphere. Most owners of the breed have at least two to provide the necessary pack, because the animals are still pack-oriented. The breed is very intelligent. Isolation intensifies anti-social behavior, and the dogs panic if locked in an enclosed space. Owners must train their animal with a great deal of patience because the breed doesn’t take well to obedience and is extremely strong willed. They have a tendency to become especially attached to one person,and are extremely loyal to their master. The breed rarely barks, alerting the owner in various, other ways. It is recommended not to have a Saarlooswolfhound around children or other animals, because they still have a strong drive to kill prey.