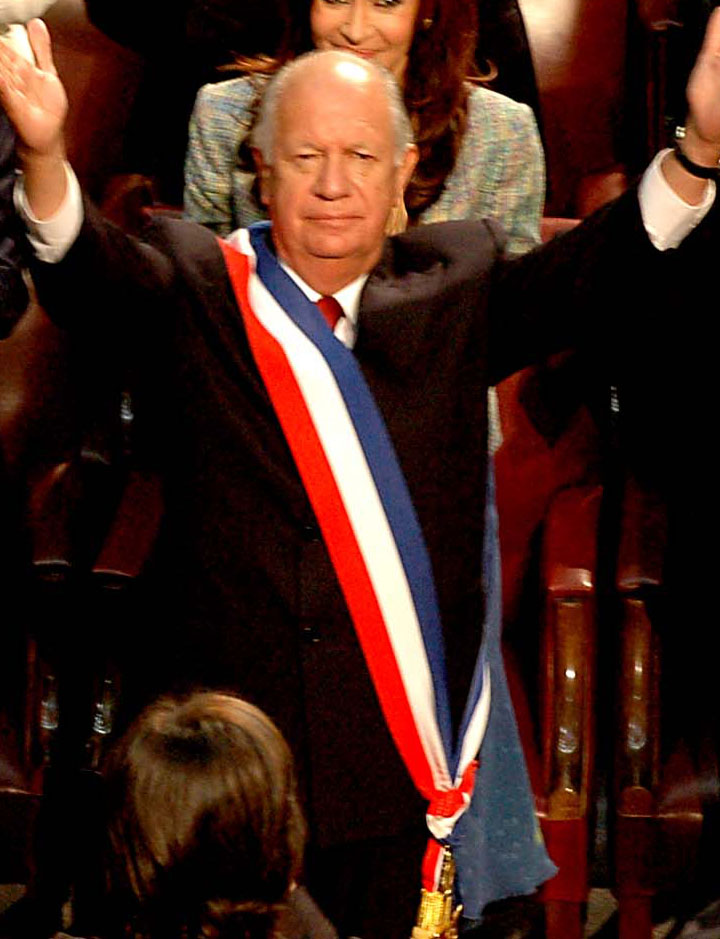 Ricardo Froilán Lagos Escobar (born , ) is a lawyer, economist and social democrat politician, who served as president of from 2000 to 2006. He won the 1999-2000 presidential election by a narrow margin in a runoff over (UDI) candidate . He was Chile's first president. Lagos was also the third president from the center-left to have ruled Chile since 1990. He was succeeded on by Socialist , from the same coalition. Since May 2007 he has served as a for the .

Lagos was born in . He was the only child of Froilán Lagos Sepúlveda (a farmer who died when his son was eight years old) and (who died in April 2005 at age 108). He attended primary school at and high school at the prestigious .

Lagos became a lawyer and married , with whom he had two children, Ricardo and Ximena. After obtaining his Ph.D. in the U.S., he this marriage. ( was not legal in Chile until 2004.)

Lagos earned a Ph.D. from , where he studied from 1960 to 1962. He then became a visiting professor at the University of North Carolina at Chapel Hill in the political sciences department until 1965. After his time in North Carolina, he kept ties with both universities. On his return to Chile, he was employed at the Institute of Economy of the University of Chile, directed by . In 1967, he was named Director of the School of Political and Administrative Sciences, a position he held until 1969, when he became Secretary General of the University of Chile. Lagos subsequently began work as a professor of economics in the School of Law of the University, and between 1971 and 1972 he was Director of the Institute of Economy. He was later named Director of the Latin American Council of Social Sciences.

During the 1970s, Lagos declared himself an "independent of the left" and abandoned the Radical Party of Chile, which he had joined in 1961, when this party supported 's government. Although he did not possess great diplomatic experience, he worked with Hernán Santa Cruz as an ambassador to the , where he presented an outstanding speech on the international financial crisis. During the speech, he strongly criticized the decision of U.S. President on the nonconvertibility of the U.S. dollar into , a measurement that would end in the rounding up the Asian crisis. In 1972, President appointed Lagos as the Chilean Ambassador to the in , but the appointment was never ratified by Congress. As a Regional Director of the training program of post graduate studies in social sciences, he was later put in charge of Project , of the (UNDP) in . As a public servant he also served Chile as a United Nations delegate with rank of ambassador at the 26th . In addition, he was a delegate to the UN's 3rd Conference of Commerce and Development ().

Soon after the 1973 coup d'état, he and his family were sent into in , , where he took the position of Secretary General of the (FLACSO). He moved for a year to the United States, where he became visiting professor of the William R. Kenan chair for Latin American Studies at the . In 1975, he worked as a consultant for the United Nations Development Programme.

Lagos returned to Chile in 1978, and worked for the Regional Program of Employment of the United Nations, PREALC. During the implementation of policies imposed by the his mission was to advise all the governments in the South American continent on the matter of employment.

During the 1980s, Lagos assumed a fundamental role in the fight for the recovery of democracy. In addition to being one of the leaders of the , he became President of the Democratic Alliance, a force that grouped the majority of the democratic parties opposing the regime of General . In 1983, he decided to leave his position as international civil employee in the United Nations. In December of that year, he became president of the Democratic Alliance. In 1987, as the president of the Committee of the Left for Free Elections, he called on all citizens and parties to enroll in the electoral registries to vote "no" in a 1988 national plebiscite on whether Pinochet should be allowed to remain president of Chile.

Lagos became the undisputed leader of Pinochet's opponents after appearing in the political television show "De Cara al País" where he indicated that "with the triumph of "No", the country will prevent General Pinochet from being 25 years in power." Lagos then looked directly into the camera and accusingly raised his index finger to say directly to all viewers: "General Pinochet has not been honest with the country. I will remind you, General Pinochet, that on the day of the 1980 plebiscite you said that President Pinochet would not be a candidate in 1989. And now, you promise the country another eight years of tortures, murders, and human rights violations. It seems to me inadmissible that a Chilean can have so much hunger for power. You intend to stay in power for 25 years..." To this day, in Chile the phrase "the finger" or "Lagos' finger" refers to this memorable event; on that night, many people were convinced that the man would not survive to see the next day.

After the triumph of the "No" alternative and the subsequent resignation of Pinochet, Lagos declined to be a candidate for the presidency in spite of being the main leader of the opposition. Instead, he supported 's candidacy and ran for a seat in the Senate for the Santiago-West district. On , , the day of the elections, he obtained the district's second majority. Nevertheless, he did not win a seat because his alliance's list did not double the vote of the second most voted list; this being a requisite in the Chilean electoral system created by Pinochet.

In 1990, Lagos was named Minister of Education by President Patricio Aylwin. In this position, he initiated reform aimed at increasing equality in access and improving education levels. In June 1993, he pushed for the notion of using primary elections in order to select the coalition's candidate for the following presidential election. He lost this primary to , who went on to become President of Chile. In 1994, Frei himself named Lagos Minister of Public Works. In this role, he developed an innovating system of road concessions, integrated the private sector in the construction of works and its later operation. During the Frei administration, he continued to be a leader of opinion and was a sure option for the following presidential election. His status was later ratified by his appointment as one of the members of the "Committee of Twelve Distinguished Members" of the , which he shared with such personalities as and . This committee was set up to process proposals for the renovation of the social democratic thought for the 21st century.

In 1999, Lagos resigned as minister in order to begin his presidential campaign. In the primaries, he defeated senator , of the to become the Concertación's sole presidential candidate. In the first round of the presidential election in December of the same year, he defeated right-wing candidate , by only 30,000 votes. Since he failed to obtain an absolute majority, as is required to be elected President, a presidential runoff was subsequently held in January 2000 for the first time ever in Chile. Winning 51.3 percent of the vote, Lagos became the new President of Chile.

During the first year of his term in office, Lagos had to confront a high level of unemployment, generated by the political instability of the region, in a process that began to revert during the end of 2003 . In spite of this, Lagos enjoyed great popular support, bordering on 55%, and ending around 60-70% during the last six months of his term. The policy of proximity with people was pronounced in the opening of the doors of the , that had remained closed since the 1973 coup d'etat.

Beginning in 2002, his government had to face suspicions of political corruption due to the prosecution of one of his ministers, Carlos Cruz, and of other civil employees of the Public Works Ministry, in the denominated MOP-GATE case. Gloria Ana Chevesich, the judge in charge of this case, discovered that ministers, undersecretaries and other officials of exclusive confidence of the President, received additional payments to their regular remuneration: the so-called "extra payments". This irregularity was acknowledged by Lagos, who specified that the practice had also developed during the governments of Frei Ruiz-Tagle and Aylwin. The official position of the government consisted of not acknowledging the criminal nature of these practices and establishing a legal reform that increased the pay of ministers and undersecretaries of the government, a matter that was approved in its legislative proceeding.

During 2004, Lagos faced a series of tensions in his relation with other South American countries, caused by recurring Bolivian aspirations for access to the sea. This situation was linked with the power crisis taking place in , an important supplier of natural gas to Chile. In bilateral meetings between Bolivian President and Argentine President , the former agreed to the sale of Bolivian gas to Argentina under the condition that "not a single gas molecule be sold to Chile". Additionally, the n President, , has supported in various instances the Bolivian sea claim, causing a diplomatic impassé between Chile and Venezuela. The tension between both governments had dissipated during July 2004.

Lagos' presidency was characterized by such achievements as the signing of Free Trade Agreements with the , the , , the and , and (though some of his supporters in the center-left consider that these agreements contribute to economic and may have negative effects on the country); improvements in infrastructure and transport; the creation of an unemployment insurance; the AUGE health program guaranteeing coverage for a number of medical conditions; the "Chile Barrio" housing program; extending compulsory schooling to 12 years; the approval of the first divorce law in Chile; monetary compensation to victims of torture under the Pinochet regime identified in the ; and, recently, the signing of a recast constitution. He finished his six-year term with historic s above 70%. He was the first agnostic to be elected president of Chile.

On Lagos inaugurated his own foundation called "Democracia y Desarrollo" ("Democracy and Development") in Santiago. Three days later he began a two-year term as President of the — an exclusive organization of former presidents created by a Spanish philanthropist to promote democracy across the world. He also assumed co-chairmanship of the 's Board of Directors.

On , Lagos, along with and , was named by as a . His appointment was controversial among Chilean environmental groups who questioned his track record on the matter, claiming that he 'showed an utter lack of consideration for the environment, promoted policies against environmental sustainability and favored the interests of big economic groups, even defending crimes against nature internationally'. [cite web
url=http://www.radiomundoreal.fm/rmr/?q=en/node/22661
title=Environmentalist Organizations Reject Ricardo Lagos’ Appointment as UN Special Envoy for Climate Change
publisher=Real World Radio
date=2007-05-24
accessdate=2007-08-04] [cite web
url=http://web.archive.org/web/20070518095630/http://diario.elmercurio.com/2007/05/07/nacional/nacional/noticias/2A2A33CF-D72A-47E1-A5AD-10246196DFE7.htm?id=%7b2A2A33CF-D72A-47E1-A5AD-10246196DFE7%7dje
title=La carta que busca frenar a Lagos ante la ONU
publisher= via the
date=2007-05-07
accessdate=2007-08-04]

On May 2007, announced that Lagos would take a teaching position at the for a period of five years, starting on . [" [http://www.emol.com/noticias/nacional/detalle/detallenoticias.asp?idnoticia=256326 Ricardo Lagos será profesor en universidad de EE.UU.] ." "EMOL", accessed on .]