Francisco Alves Mendes Filho[1], better known as Chico Mendes (December 15, 1944 – December 22, 1988), was a Brazilian rubber tapper, trade union leader and environmentalist. He fought to preserve the Amazon rainforest and advocated for the human rights of Brazilian peasants and indigenous peoples. He was assassinated by a rancher on December 22, 1988.

Francisco "Chico" Alves Mendes Filho was born on December 15 , 1944 in the town of Seringal Santa Fé, outside of Xapuri. He was the son of a second generation rubber tapper, Francisco Mendes, and his wife Irâce.[2] Chico was one of seventeen siblings -- only six of whom survived childhood.[3]

At age 9, Chico began work as a rubber tapper.[4] Schools were generally prohibited on the rubber plantations. The owners didn't want the workers being able to read and do arithmetic, because they would then be likely to discover that they were being exploited. Mendes did not learn to read until he was approximately 20 years old.[5] 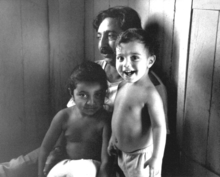 Chico Mendes with his children

The Xapuri Rubber Tappers' Union was created in 1970, and Chico was elected as its president.[7]

Mendes played a central role in the creation of the National Council of Rubber Tappers in the mid-1980s.[8] Mendes' group also had strong ties with the CNDDA ("National Campaign for the Defense and Development of the Amazon"), and helped locally organize Workers' Party support.[9]

When the first meeting of this new union was held in 1985, in the capital Brasilia, rubber tappers from all over the country came. The discussion expanded from the threats to their own livelihoods to the larger issues of deforestation, road paving, cattle ranching. The meeting also had the effect of catching the attention of the international environmentalist movement, and highlighting their plight to a larger audience. The group embraced a larger alliance with environmentalism, rather than strict Marxism, in spite of the bourgeois associations of the former. [10]Another result of these discussions was the coining of the concept and the term "extractive reserves." [11]In November of that year, Adrian Cowell, an English filmmaker, filmed much of the proceeds of this meeting as part of a documentary he was making about Mendes, which aired in 1990.[12]

Mendes believed that relying on rubber tapping alone was not sustainable and that the seringueiros needed to develop more holistic, cooperative systems that utilized a variety of forest products such as nuts, fruit, oil, and fibers; and that they needed to focus on building strong communities with quality education for their children.[13]

In March of 1987, the Environmental Defense Fund and National Wildlife Federation, flew Mendes to Washington, D.C. in an attempt to convince the Inter-American Development Bank, World Bank, and U.S. Congress to support the creation of extractive reserves.[14]

Mendes won several awards for his work, including the United Nations Environmental Program Global 500 Roll of Honor Award in 1987, and the National Wildlife Federation's National Conservation Achievement Award in 1988.[15]

In 1988, Mendes launched a campaign to stop rancher Darly Alves da Silva from logging an area that was planned as a reserve. Mendes not only managed to stop the planned deforestation and create the reserve[citation needed] but also gained a warrant for Darly's arrest, for a murder committed in another state. He delivered the warrant to the federal police, but it was never acted upon. [10]

On the evening of Thursday, December 22, 1988, Chico Mendes was assassinated in his Xapuri home by the son of a local rancher, Darly Alves da Silva. The shooting took place exactly one week after Mendes' 44th birthday, where he had predicted that he would "not live until Christmas". Mendes was the 19th rural activist to be murdered that year in Brazil.[16] Many felt that although the trial was proceeding against the actual killers, that the role of the ranchers' union, the Rural Democratic Union, and the Brazilian Federal Police was ignored.[17]

In December, 1990, rancher Darly Alves da Silva, his son Darly Alves da Silva Jr., and their ranch hand, Jerdeir Pereia were sentenced to 19 years in prison for their part in Mendes' assassination. In February, 1992, they won a retrial, claiming that the prosecution's primary witness (Chico's wife) was biased. The conviction was upheld, and they remained in prison. In 1993 they escaped from jail, along with 7 other prisoners, by sawing through the bars of their prison window. All were recaptured, except for Darly Jr., who was as of 2004 still at large.[18]

Mendes' murder made international headlines, and led to an outpouring of support for the rubber tappers' and environmental movements. In March 1989 a third meeting was held for the National Council of Rubber Tappers, and the Alliance of Forest Peoples was created to protect rubber tappers, rural workers, and indigenous peoples from encroachment on traditional lands.[19]

Thanks in part to the international media attention surrounding the murder, the Chico Mendes Extractive Reserve was created in the area where he lived. There are more than 20 such reserves now, along the same lines as Mendes had proposed, covering more than 8 million acres (32,000 km²).[citation needed]

The musical group Maná made a song about the death of Mendes. The song was titled Cuando los Ángeles Lloran, referring to Mendes as an angel that has died. Sir Paul McCartney dedicated the song "How Many People" from his 1989 album Flowers In The Dirt to the memory of Mendes.