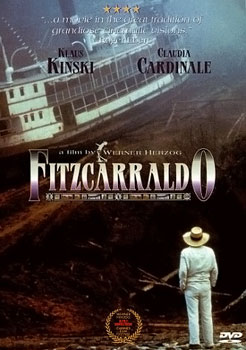 
"Fitzcarraldo" is a 1982 film written and directed by and starring as the title character. It portrays would-be rubber baron Brian Sweeney Fitzgerald , an Irishman called Fitzcarraldo in , who has to pull a steamship over a steep hill in order to access a rich rubber territory. The film is derived from the real-life story of Peruvian rubber baron .

Brian "Fitzcarraldo" Fitzgerald, a European living in a small city in in the early part of the 20th century, has a great love of opera and an indomitable spirit. He is a great fan of the famous tenor and he dreams of building an in his city of . This will require a lot of money, and the most profitable industry in Peru at the time is . The areas known to contain have been parceled up by the Peruvian government and can be leased for exploitation.

Fitzcarraldo investigates getting into the rubber business. He is shown a map by a helpful rubber baron, who points out the only remaining unclaimed parcel in the area. He explains why no one has yet claimed the parcel: while it straddles the , the parcel is cut off from the Amazon by a treacherous set of . However, Fitzcarraldo notices that the , another Amazon tributary, comes within several hundred meters to the Ucayali upstream of the parcel. [In reality, however, the Pachitea is a tributary of the Ucayali, not a third river, and they meet nearly 500 kilometers south of Iquitos. The real map looks nothing like the one Fitzcarraldo draws for Orinoco Paul.]

To make his dream a reality, he leases the inaccessible parcel from the government. With the selfless underwriting of his paramour and brothel owner, Molly (), he buys a steamer (which he the "Molly Aida") from the same rubber baron, raises a crew and sets off up the Pachitea, the parallel river. This river is known to be more dangerous the further one gets from the Amazon because of the unfriendly tribes that inhabit the area. Fitzcarraldo's plan is to reach the point where the two rivers nearly meet and then, with the manpower of enlisted natives, physically pull his three-story, 320 -ton steamer over the muddy 40° hillside across an isthmus, from one river to the next. Using the steamer, he will then collect rubber on the upper Ucayali and bring it down the Pachitea to market.

The story was inspired by the real life Peruvian rubber baron Carlos Fermín Fitzcarrald; in the 1890s, Fitzcarrald did bring a steamship across an isthmus from one river into another, but it weighed only 30 tons and he had it dismantled before doing so.

In his autobiographical film "", Herzog has stated that the film's spectacular production was partly inspired by the engineering feats of ancient . The film production was an incredible ordeal, and famously involved moving a 320 -ton steamship over a hill without the use of special effects. Herzog believes that no one has ever performed a similar feat in history, and likely never will again, calling himself "Conquistador of the Useless".

The casting of the film was also quite difficult. was originally cast in the title role, but he became ill and was forced to leave. Herzog then considered casting , and even playing Fitzcarraldo himself, before accepted the role. By that point, forty percent of shooting was complete and Herzog insisted on a total reshoot with Kinski. was originally cast as Fitzcarraldo's assistant Wilbur, but his shooting schedule expired and he departed to tour with . Herzog dropped Jagger's character from the script and reshot the film from the beginning. Though none of the major cast members spoke English natively, the original was recorded in English, as it was the only language common to the lead actors.Fact|date=April 2008

Klaus Kinski himself was a major source of tension, as he fought with Herzog and other members of the crew and greatly upset the native extras. In his documentary "", Herzog says that one of the native chiefs offered to murder Kinski for him, but that he declined because he needed Kinski to complete filming.

's documentary "", about the production of the film, documents these many hardships. Blank's footage, which also appears in Herzog's "Portrait Werner Herzog" and "" contains some of the only surviving footage of Robards and Jagger in "Fitzcarraldo" and many scenes documenting the ship's journey over the mountain, along with several episodes of Kinski's raving.

Locations used for the movie include:

* "Filming the Making of the Film of the Making of Fitzcarraldo", a short story by , speculates about a camera crew following the camera crew of "" as they make a film about the making of "Fitzcarraldo". It was published in 1989 in "Omni" magazine, and has been republished in "In the Hollow of the Deep-Sea Wave", a collection of the author's fiction; as well as in the collection "Of Shrew-Mice and Tattoo'd Men", to be published by the publisher in 2009.

* The song "Oh Funny Man," by the makes several references to the film, including the line "have you ever seen a shrunken head?"

* The song "Fitzcarraldo" was written by frontman, , after watching the film.

* The plot of "Fitzcarraldo" was parodied in the show "" in the, appropriately titled, episode "Dethcarraldo".

* British artist M.I.A. likened the creation of her album "Kala" to the making of the film, saying "I felt like I was trying to drag a big boat over the mountain."