The Earl of Erroll is an ancient title in the Peerage of Scotland. It was created in 1453 for Sir William Hay.

The Earl of Erroll is one of four peers entitled to appoint a private pursuivant, with the title "Slains".

Earl of Erroll is also the name of a Scottish National Dance, danced today at Highland Games around the world.

Regrant of the Earl of Erroll

A regrant was one of the peculiarities in the Scottish law of Peerage, that a party might, by a resignation to the Crown, and a charter following upon such resignation, obtain power to nominate the heirs to succeed him in his honours and dignities. Some of the highest of the Scottish peerages are held under such nominations.[1] The 11th Earl of Erroll, Gilbert, on the 13th November 1666, obtained a regrant of his honours. This regrant had special power to nominate his heirs. This nomination was made in 1674 with Gilbert appointing his cousin Sir John Hay of Keillour and his heir male, failing which, appointing Sir John Hay of Keillour's heir female, and failing which, appointing certain Hays of Tweeddale. The 11th Earl of Erroll having died in 1674 without issue, Sir John Hay of Keillour became 12th Earl of Erroll. On his death in 1704, his son, Charles became the 13th Earl of Erroll. Charles died unmarried in 1717, when the title devolved on his sister, Mary. The 14th Countess of Erroll died in 1758 without issue. Mary's sister Margaret had previously died at Rome in 1723, however she had married James, 5th Earl of Linlithgow, 4th Earl of Callendar, and had issue, and it is from her that the present Earl of Erroll is descended.[2][3]

His heir apparent is his son Harry Thomas William Hay, Lord Hay (b. 1984). 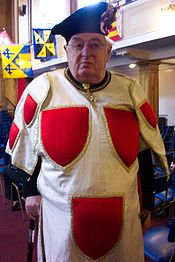 Slains Pursuivant, Peter Drummond-Murray of Mastrick, is the private officer of arms of the Earl of Erroll