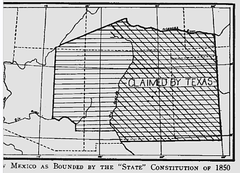 The Territory of New Mexico was an organized incorporated territory of the United States that existed from September 9, 1850, until January 6, 1912, when the final extent of the territory was admitted to the Union as the State of New Mexico.

The Congressional Compromise of 1850 halted a bid for statehood under a proposed antislavery constitution.

The status of slavery during the territorial period provoked considerable debate. The granting of statehood was up to a Congress sharply divided on the slavery issue. Some (including Stephen A. Douglas) maintained that the territory could not restrict slavery, as under the earlier Missouri Compromise, while others (including Abraham Lincoln) insisted that older Mexican legal traditions, which forbade slavery, took precedence. Regardless of its official status, slavery was rare in antebellum New Mexico. Black slaves never numbered more than about a dozen.[1]

As one of the final attempts at compromise to avoid the Civil War, House Republicans offered to admit New Mexico as a slave state immediately. Although approved by committee on December 29, 1860, the South did not take up this offer.[clarification needed] [2] On February 24, 1863, during the American Civil War, Congress divided the territory and created the new Arizona Territory along current boundaries between the states. The act of establishment abolished slavery in the Arizona Territory.

Mexico ceded the region to the U.S. in the Treaty of Guadalupe Hidalgo in 1848 after the Mexican-American War. The area of the Gadsden Purchase was bought by the US in 1853. This added today's southern Arizona and a smaller area in today's southwestern New Mexico.[4] Texas claimed (but never controlled) the area from the Rio Grande to the present New Mexico-Texas border, bisecting historic New Mexico and slightly over half of today's New Mexico, until ceding it as part of the Compromise of 1850. This awarded Texas El Paso and the Texas Panhandle, which had been parts of the Spanish and Mexican territories of Santa Fe de Nuevo México.

As the route to California, New Mexico and Arizona were disputed territory during the American Civil War, resulting in Gadsen settlers willingly joining the Confederate States of America. The Battle of Glorieta Pass gave the area primarily to the Union. Confederate Arizona Territory was the first American incarnation of Arizona.[7]