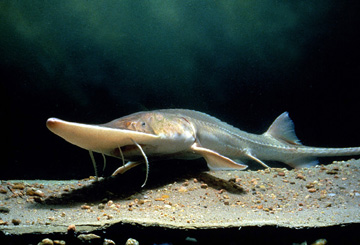 image_width = 250px
regnum = ia
phylum = Chordata
classis =
ordo =
familia =
subfamilia =
genus = ""
species = "S. albus "
binomial = "Scaphirhynchus albus "
binomial_authority = Forbes and Richardson, 1905The pallid sturgeon ("Scaphirhynchus albus") is an of ray-finned fish endemic to the waters of the Missouri and lower basins of the . In 1990, the placed the pallid sturgeon on the endangered species list because very few young pallid sturgeons were observed and overall sightings of the fish had greatly decreased in the preceding decade.

The pallid sturgeon is thought to have become endangered due to a loss of habitat. The vast majority of the Mississippi River drainage system has been channeled and dammed, reducing gravel deposits and slow moving side channels that are favored spawning areas. The fish was relatively common until the middle of the 20th Century, and anglers found landing such a large fish in fresh water a rewarding experience. The species is also considered to be an excellent tasting fish, and like many sturgeon, the eggs have been used as , though this was never common with this species.

Efforts to restore the species have yet to yield positive results. Capturing a young pallid sturgeon has become a rare event since the 1980s. With the major alterations to natural spawning areas that have occurred throughout their native habitat, restoration of these areas throughout the Mississippi River drainage basin will be mandatory if the species is to be expected to survive in the wild. Active efforts using fish hatcheries for spawning may help to ensure the species continues to exist, but this existence is heavily dependent on human assistance. In an effort to better understand pallid sturgeon behavior, researchers have implanted GPS transmitters, making it easier to track their movements and help identify possible spawning areas.

The pallid sturgeon's closest relatives are the shovelnose sturgeon ("Scaphirhyncus platorhynchus"), which is still relatively common, and the critically endangered ("Scaphirhynchus suttkusi"), which may now be extinct.

Like other sturgeons, pallid sturgeons do not have scales or bones as are found in more modern species of fish. Instead, they have cartilaginous skeletons with 5 rows of thick cartilage plates that extend along their sides, undersides and backs, as well as most of the head. These thick cartilage plates are covered by the skin and serve as a protective armor.

The pallid sturgeon snout and head are longer than that of the shovelnose sturgeon. in both species, the mouth is located well back from the tip of the snout. Lacking teeth they use their extendable mouths to suck up small fish, mollusks and other food sources from river bottoms. Both species also have four barbels which descend from the snout near the front of the mouth. The barbels are believed to be sensory features to locate food sources. On pallid sturgeons, the two inner barbels are only about half as long as the outer ones, while on the shovelnose sturgeon, all four barbels are the same length. The inner barbels of the pallid sturgeon are also positioned ahead of the outer ones, whereby those on the shovelnose sturgeon are all located in essentially a straight line. The length and positioning of the barbels is one of the best ways to distinguish the two species.

Pallid sturgeon have very long lifespans but it is unclear exactly how long they live. A lack of bones and scales has made exact age determination difficult in those fish that have been researched.

Prior to the construction of dams on the Missouri, pallid sturgeon would migrate hundreds of miles upstream to spawn.

The pallid sturgeon's historical range spanned the entire Missouri and into the Mississippi Rivers, however the species is considered critically imperiled throughout its entire range.

Six areas were studied for wild pallid sturgeon population estimates and recovery recommendations by the (USFWS) between 1990, when the species was declared endangered, and 2006. The USFWS has referred to these six areas of wild pallid sturgeon population studies as Recovery Priority Management Areas (RPMA's). In the northernmost region of the study, known as RPMA 1, located between the in Montana to the western reaches of Fort Peck Reservoir, only 45 wild (non-hatchery) individuals remain. Of these, no juveniles were observed and the population was declining. In RPMA 2, located between Fort Peck Dam, the headwaters of and the lower Yellowstone River up to the confluence of the , Montana, only 136 wild specimens remain. In RPMA 3, stretching from upstream of the to along the Missouri River, no native populations were recorded. All collected specimens were apparently hatchery raised. However, the hatchery raised specimens were apparently maturing and adjusting well to this section of the river. RPMA 4 extends from Gavins Point Dam to the confluence of the Missouri and Mississippi Rivers. This region also includes the Platte River. Here, at least 100 unique non-hatchery specimens were collected during the study period. There is also evidence that some wild reproduction is ongoing in this region. In RPMA 5, between the confluence of the Missouri and Mississippi and the , several hundred specimens were documented. Here again, some evidence suggests that natural reproduction is occurring, as demonstrated by the recovery of a few examples of immature, non-hatchery raised individuals. The Atchafalaya River basin is designated as RPMA 6 and the findings there were similar to those in Recovery Priority Management Areas 4 and 5 but with greater numbers of unique individuals, near 500 in total.

Pallid sturgeons prefer moderate to swift river currents and most captured specimens have been recovered in rivers and streams in which the current averages between 0.33 to 2.9 feet (10 and 90 centimeters) per second. They also prefer turbid waterways and water depths between 3 and 25 feet (1 and 8 m). The species is more commonly found where sandy substrates are plentiful but can also be found in waterways that are predominately rocky. Pallid sturgeons tend to prefer swift river currents more often than do shovelnose sturgeon. In a Montana and based study conducted on both the pallid and shovelnose sturgeon, both species were fitted with radio transmitters. Pallid sturgeons were found to prefer wider river channels, mid-channel sandbars and numerous islands and were most commonly recorded in water depths between 2 and 47 feet (.6 and 14.5 m). The study also showed that both pallid sturgeon moved up as much as mi to km|13 a day and up to mi to km|5.7 per hour.

Pallid sturgeons are generally bottom feeders, skimming the sandy reaches of the various rivers and streams in their habitat. Though little is known about the precise eating habits of the species, they are thought to be opportunistic feeders. One study which examined the contents from the stomachs of juvenile pallid sturgeons revealed that their diets were seasonally dependent. Various insects were consumed during some seasons and other fish species during others. The results indicated that pallid sturgeons are opportunistic in their eating habits.

Though never believed to be common, pallid sturgeon populations nosedived during the late 20th century and the species was listed as endangered on September 6, 1990. The and most of the states that have pallid sturgeon have commenced restoration efforts to save the species from extinction. Wild reproduction of pallid sturgeon is rare to nonexistent in most areas. Therefore, human intervention is needed to ensure the survival of the species.

The Missouri River in the northern states of North Dakota and , Nebraska and Montana, has been significantly altered. The resultant changes to the Missouri River in the upper Great Plains from channelization and impoundment prevent upstream migration, have reduced water flow rates and sediment loads and has brought an end to the seasonal flooding of the flood plains in the region. Since the construction of the in Montana in 1937 and subsequent damming and channelization, the Missouri river has lost over 90 percent of its wetland and sandbar ecosystems. More than 2,000 miles (3,220 km) of the Missouri River has been altered and only that stretch of the river above Fort Peck Reservoir in Montana remains relatively unchanged.

In , at the Lisbon Bottoms section of the , wild pallid sturgeon larvae were collected in 1998. These non-hatchery raised larvae were the first recovered on the lower Missouri River in the previous 50 years. The recovery was made along a side channel of the Missouri River that had been developed to provide suitable habitat for pallid sturgeon and other fish spawning.

The U.S. Fish and Wildlife Service concluded in 2007 that continued hatchery based reproduction efforts should be continued and that monitoring of any population changes must continue in order to determine the effectiveness of human intervention. The 2007 findings also emphasized the need to determine the most likely areas of spawning, to identify any parasitic or disease that may be impacting the reproductive capabilities of pallid sturgeon and to examine engineering possibilities that may permit recreation of suitable habitats without reducing the ability to protect people from harmful and destructive flooding, and maintaining the ability to provide adequate water impoundment for irrigation and recreation purposes. Close monitoring of hatchery raised pallid sturgeon in 2007 resulted in the discovery of some abnormal cell development, and these fish had to be destroyed before they were released. However, in the same year, the U.S. Fish and Wildlife Service released over 400,000 hatchery raised pallid sturgeon at various locations on the Missouri and lower Yellowstone Rivers.