Nicklas Erik Lidström (born April 28, 1970 in Västerås, Västmanland, Sweden) is a Swedish professional ice hockey defenseman who has played his entire National Hockey League (NHL) career with the Detroit Red Wings, and is their captain. In his 19 NHL seasons, Lidström has won four Stanley Cups, seven James Norris Memorial Trophies as the NHL's best defenseman, and has been voted into eleven NHL All-Star Games. He is the first European-born and trained NHL captain to win the Stanley Cup [1], as well as the first European player named playoff MVP. Lidström is also the active leader in NHL games played.

Representing Sweden, Lidström won the World Championship in 1991. At the 2006 Winter Olympics, Lidström was a major factor in Sweden's win over Finland in the finals, scoring the gold medal clinching goal, thus earning him a spot on the Olympic All-Star Team. He also became the 17th member of the Triple Gold Club. The Hockey News selected Lidström as the "Best European-trained player ever in the NHL".[2] The Sporting News and Sports Illustrated selected Lidström as the "NHL Player of the Decade".[3][4]

Lidström is considered the top NHL defenseman of his era , having won the Norris Trophy as the NHL's best defenseman three consecutive seasons from 2000–01 to 2002–03 and again from 2005–06 to 2007–08. He has been nominated for the award a total of twelve times in the past fourteen seasons, the first three times finishing as the runner-up, and has won it in seven of the last ten (2004–05 had no winner due to the NHL lockout). In fourteen consecutive seasons (since 1995-96), he has finished no worse than 6th place in Norris Trophy voting.[5]

Lidström began his career in Avesta, Sweden, playing with Skogsbo SK, before moving on to play with Västerås IK of the Swedish Elitserien. In three seasons with the team, he played in 103 games, scoring 12 goals and 30 assists. Drafted by the Detroit Red Wings 53rd overall in the 1989 NHL Entry Draft, Lidström joined the team in the 1991–92 NHL season, though he returned to play for Västerås IK for a brief period during the 1994–95 NHL lockout. Lidström scored 60 points in his rookie season, finishing second to Pavel Bure in voting for that year's Calder Trophy. He was selected to the 1992 NHL All-Rookie Team along with fellow Red Wings defenceman Vladimir Konstantinov. 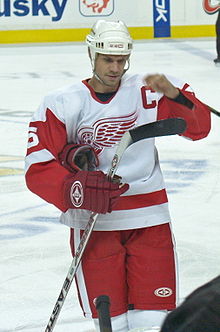 Lidström during his first season as captain of the Red Wings.

Never a big and bruising defender, many experts say that the secret behind Lidström's consistent game is his ability to read the game; this, combined with his excellent skating ability, allows him to be at the right spot of the ice at the right time. Instead of delivering a big body check, Lidström prefers to steal the puck and create a turnover. His reliance on brains rather than brawn might explain his lack of injuries, and also his low penalty minute totals. For most of his NHL career, he has studiously avoided drawing penalties, although the introduction of many new rules in 2005–06 saw him rack up his career high (50) in penalty minutes. The 2005–06 season also brought him his career high of 80 points (16 goals, 64 assists).

In the 2002 Stanley Cup playoffs, Lidström was named the winner of the Conn Smythe Trophy as most valuable player during the playoffs, becoming the first-ever European to be awarded the trophy.[8]

Lidström was set to make $10 million during the 2005–06 season, but because of the new NHL Collective Bargaining Agreement created in July 2006, salaries on pre-existing contracts were reduced by 24%, which lowered his compensation to $7.6 million. That season, he posted career high 64 assists and 80 points to go with 16 goals.

On June 30, 2006, it was announced that Lidström had signed a two-year, $15.2 million contract with the Red Wings; instead of seeking more money elsewhere—certainly possible for a defenseman of his caliber, especially considering his stellar numbers in the past season—Lidström decided to remain with Detroit for the same annual salary as he earned during the 2005–06 season.[9]

Lidström was an alternate captain of the Red Wings since the 1997–98 season, and was awarded the captaincy after the 2006 retirement of long-time Red Wings captain Steve Yzerman. It was an honor made more special by the fact that he became the first European captain in franchise history. In his first year of captaincy, Lidström led the Red Wings to the conference finals, but lost to eventual Stanley Cup champions, the Anaheim Ducks. In the off-season, Lidström joined an elite group by capturing the Norris Trophy as the League's outstanding defenseman for the fifth time. Lidström became the fourth defenseman in league history with as many as five Norris Trophy wins, joining Hockey Hall of Fame members Bobby Orr (eight), Doug Harvey (seven), and Ray Bourque (five).

Near the beginning of the 2007–08 season, in an October 8 win against the Edmonton Oilers, Lidström registered two assists, passing Peter Forsberg as the second-highest scoring Swedish-born NHL player of all-time. He trails only Mats Sundin (as of the end of the 2009–10 season, Lidström has 1,046 points to Sundin's 1,349).[10] Later in the campaign, on December 26, Lidström signed a contract extension through the 2009–10.[11] Several months later, on April 3, 2008, he assisted on a goal by Johan Franzén to tie Luc Robitaille at 42nd all-time with 726 assists.[7] 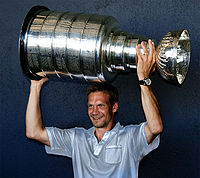 Lidström has won the Stanley Cup four times in his career.

Entering the playoffs as Presidents' Trophy winners, the Red Wings met the Pittsburgh Penguins in the 2008 Stanley Cup Finals. Despite a game five, triple-overtime victory by the Penguins to stave off elimination, Lidström and the Red Wings defeated Pittsburgh in game six to capture the Stanley Cup. In doing so, Lidström became the first European-born-and-trained captain to win the Stanley Cup.[12] In 1934, Charlie Gardiner, a goalie born in Scotland had captained the Chicago Black Hawks to win the Stanley Cup and in 1938, Johnny Gottselig, a left winger born in Russia also captained Chicago to a championship, but both players were trained in Canada.

Just over a week after winning his fourth Stanley Cup in eleven seasons, on June 12, Lidström won the Norris Trophy for the third straight season and the sixth time in seven seasons.[13]

As the Red Wings opened the 2008–09 pre-season against the Montreal Canadiens, Lidström suffered a broken nose as a shot from Canadiens forward Christopher Higgins ricocheted and hit him in the face.[14] From then on he began wearing a visor. He returned in time for the regular season and was selected to the 2009 NHL All-Star Game in Montreal. However, in the midst of dealing with tendinitis that had been bothering him all season, Lidström chose to sit out All-Star weekend, along with Pavel Datsyuk. Consequently, Lidström and Datsyuk were both suspended one game by the NHL due to league policy for missing the All-Star Game without significant injury.[15]

The Red Wings opened the 2009-10 season in Stockholm, Sweden. During the team's trip in Sweden, Lidström was honored by his home county as an Ambassador of Honor.[16] On October 15, 2009, in a game against the Los Angeles Kings, Lidström became the first European-born defenceman to reach 1000 points with 2 assists in the game. He is the fourth player to score 1000 points as a Detroit Red Wing (after Gordie Howe, Alex Delvecchio, and Steve Yzerman), and the eighth defenseman to do so in the history of the NHL. On March 5, 2010 Lidström got his 800th career assist. Also during the 2009-2010 season, Lidström played in his 1,395th game (finishing the season with 1,412), setting an all-time record for NHL games played by a player born in Europe; earlier in the season, Lidström had passed Teppo Numminen for games played by a player trained in Europe. Lidström is also fourth-all time in games played in a Red Wings uniform, behind Howe, Delvecchio, and Yzerman, all forwards.

On April 27, 2010, a day before his 40th birthday, Lidström had 3 points in a game 7 win over the Phoenix Coyotes in the first round of the 2010 NHL playoffs, pushing his active playoff points lead to 171 points, and tying him for 17th on the all-time playoff points list with fellow countryman Peter Forsberg. His next point will make him the highest playoff scorer in the NHL by a player born in Sweden.

After contemplating whether or not to retire, Lidström agreed on a 1-year contract with the Red Wings on June 1, 2010. The new contract will pay him slightly over $6 million.[19]

On December 15, 2010, Nicklas Lidström recorded his first career hat trick, at 40 years of age, against the St. Louis Blues, sealing a 5-2 victory. After the game, he was asked how it feels to score his first hat trick "It feels great, I've never in my life been able to notch 3 goals in a game". The hat trick made him the oldest player in NHL history to record his first hat trick (previously held by Scott Mellanby at 36 years old), and the oldest defenseman in NHL history to record a hat trick (previously held by Mathieu Schneider at 37 years old).[20]

On January 18, 2011, Lidström was named the captain of the 2011 NHL All-Star Game In Raleigh, North Carolina. His team won by a final score of 11-10 over Team Staal, captained by Eric Staal of the Carolina Hurricanes. Lidström finished +7 with one assist.

On June 20, 2011, after briefly contemplating retirement yet again, Lidström signed a one-year contract worth $6.2 million with the Detroit Red Wings the same amount he had been paid the previous season. On June 23, 2011 he won his 7th Norris trophy tying with Doug Harvey and one behind Bobby Orr for most Norris Trophies.

On October 22, 2011, in a game against the Washington Capitals, Lidström became the 14th player in the history of the NHL to play 1500 games. He is the first player not being born in North-America and therefore the first Swedish and European player as well as the first player to accomplish this in only his 20th season. Lidström also joined former "Red Wings" Alex Delvecchio and Steve Yzerman as the only 3 players having played exclusively for just one team throughout their careers.

Following his rookie season with the Red Wings, he earned his first gold medal with Sweden at the 1991 World Championships. Three years later, he competed in the 1994 World Championships in Italy and won a bronze medal. Two years later, he participated in the inaugural 1996 World Cup of Hockey (successor of the Canada Cup) and contributed 3 points in 4 games. He made his Olympic debut with Sweden at the 1998 Winter Olympics in Nagano.

Four years later was his next international appearance, playing in his second Olympics at the 2002 Winter Olympics in Salt Lake City, where Sweden was upset by Belarus in the quarterfinal after being heavy favorites in the round-robin. Lidström made his third World Championships appearance in 2004, but only appeared in 2 games. That summer, he also competed in the 2004 World Cup of Hockey where he scored 1 goal.

In the 2006 Winter Olympics in Torino, Lidström helped Sweden avenge their quarterfinal upset to Belarus in Salt Lake City, scoring the game winning goal in the gold medal game against Finland. In doing so, Lidström became a member of the Triple Gold Club, adding an Olympic gold medal to go with his previous Stanley Cups with Detroit, and his World Championship gold medal in 1991.[21] Lidström was also selected to the 2006 Olympic All-Star Team.

Lidström also played for Sweden in the 2010 Winter Olympics in Vancouver serving as team captain in what would be his final Olympics.[22] Lidström announced his retirement from Olympic competition following Sweden's loss to Slovakia.[23]