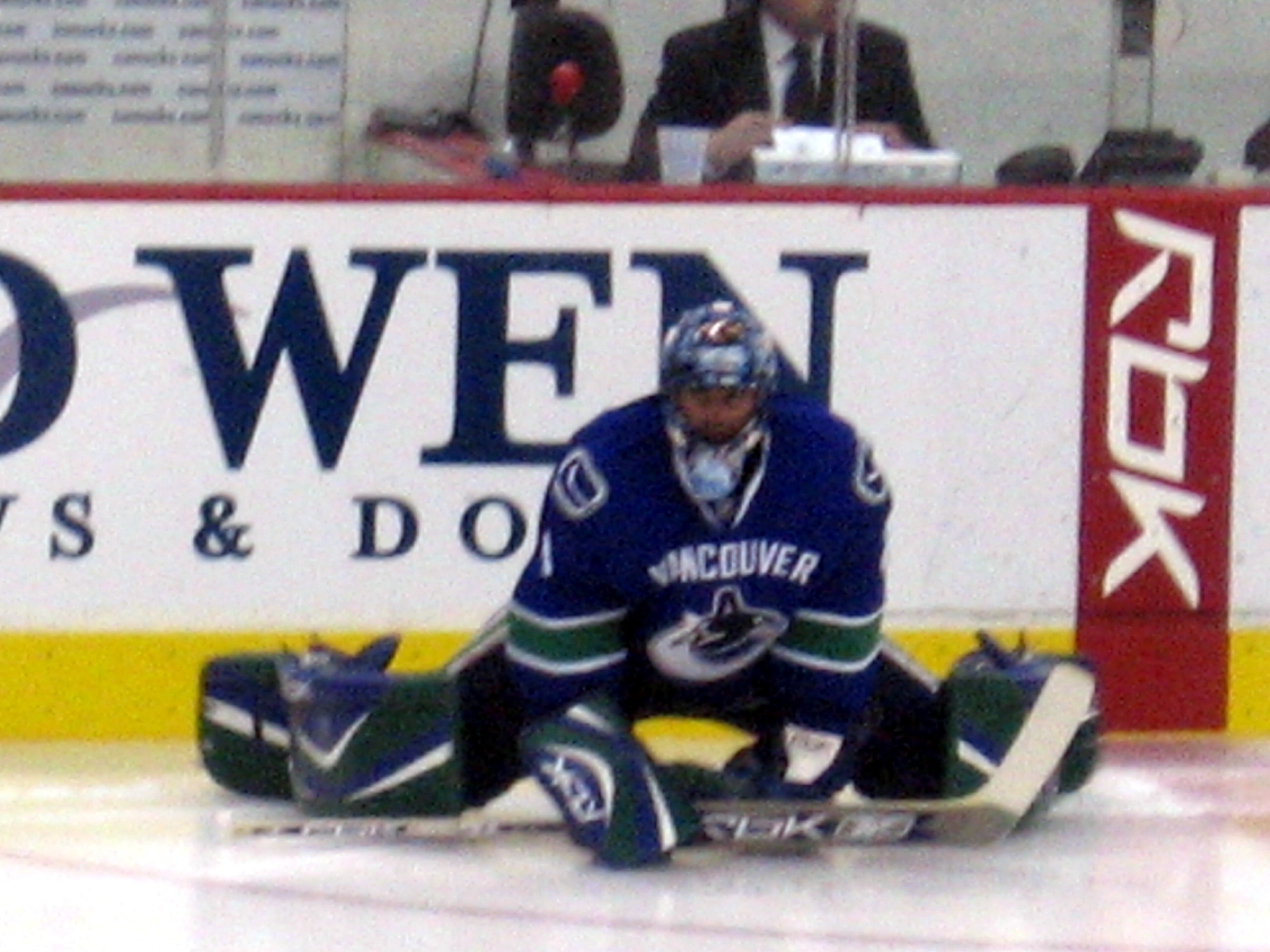 Roberto Luongo (born April 4, 1979) is a Canadian professional and team captain of the of the . He is the first NHL goaltender to be named team captain since in 1947–48. Luongo has previously played for the and the .

Playing major junior in the QMJHL for the and the , Luongo was drafted fourth overall by the Islanders in the , making him, at the time, the highest drafted goalie in NHL history. He was a nominee with Florida in 2004, and once more in his first season with Vancouver in 2007. Both years he was the first runner-up to . In 2007, he was also nominated for the and the , but was first runner-up to for both awards.

Roberto Luongo began his career in the 1995-96 season with the of the (QMJHL). In his first season with the team, he posted only six wins in 23 games played. As the team's starting goaltender the following season, he improved to 32 wins and was awarded the as the league's best professional prospect. [citeweb|title=Les honneurs individuels / Individual Awards|url=http://www.lhjmq.qc.ca/navcache/getcontents.php?currentpath=/root/Honneurs/GUIDE_SECT4_HonneursIND_de1969a2007.pdf| accessdate=2008-08-24| publisher=] In 1997-98, Luongo won 14 of 17 playoff starts to lead the Foreurs to the QMJHL championship and a appearance. Although he was traded to the for the 1998-99 season, he was able to repeat the feat and made his second straight Memorial Cup appearance.

Although the Islanders planned to have Luongo play in the NHL for the 1998-99 season, an inconsistent performance at training camp and the failure to negotiate a contract led to Luongo's return to the QMJHL that season.

That same season, on the day of the , traded Luongo to the along with for and . As both Jokinen and Luongo would eventually develop into star players with the Panthers, the trade would earn Milbury widespread criticism. [citeweb|title=Islanders' GM Milbury Follows Coach Stirling Out the Door| url=http://www.nysun.com/sports/islanders-gm-milbury-follows-coach-stirling-out/25868/| last=Greenstein| first=Kevin |accessdate=2008-08-30| date=2006-01-13| publisher= New York Sun] In Luongo's only season with New York, he played a mere 24 games and ended his career as an Islander with a 3.25 GAA and a .904 .

In Luongo's first few seasons with Florida, he posted impressive numbers, featuring a consistently high save percentage. However, on a struggling Panthers team, he would not record more than 20 wins in a season until 2003-04 — somewhat of a breakout campaign for Luongo.

In 2003-04, he placed second in voting for the after facing the most shots in a single season by an NHL goaltender (2,475), a mark previously held by . [citeweb|title=As Sens gear up for playoffs, Luongo sets shot mark|url=http://www.usatoday.com/sports/hockey/games/2004-03-31-panthers-senators_x.htm|publisher=USA Today|year=2004|accessdate=2008-04-21] Despite facing an unprecedented amount of shots, Luongo posted a 2.43 GAA and a .931 save percentage, which was first among goalies with 50-plus starts (Luongo had 72). Not surprisingly, Luongo also set an NHL record for most saves in a single season with 2,303 while picking up 7 shutouts, good enough for fifth in the league. Ultimately, Luongo lost out to fellow er for the league's top goalie.

When the NHL resumed in 2005-06 following the , Luongo posted 35 wins and a career-high 8 shutouts for the Panthers.

Prior to the start of the 2006-07 season, Luongo was in the midst of contract negotiations with Florida, and expected to sign [citeweb|title=New Canuck Luongo surprised by trade|url=http://www.cbc.ca/story/sports/national/2006/06/24/luongo-reaction.html|publisher=CBC Sports|year=2008|accessdate=2008-04-17] when GM traded him to the . In a blockbuster deal, Luongo was packaged with defenceman Lukas Krajicek and a sixth round draft pick in exchange for forward , defenceman Bryan Allen and goaltender . Immediately following the deal, Vancouver signed Luongo to a four-year, $27-million deal.

Midway through the campaign he made his first All-Star Game appearance as a starter — his second appearance overall — and was named the Skills Competition's top goalie. He led the Canucks to a Northwest Division title, seeding third in the Western Conference, after they failed to make the playoffs the previous season. Luongo would also shatter 's franchise record of 38 wins in a season with 47. That same mark would also tie 's thirty-three-year NHL record of wins in a season, although would also reach and succeed that mark that same year (Luongo and Brodeur's achievements are, however, considered to be somewhat skewed, given that it was the first season the NHL made ties obsolete with shootouts, generating more wins than in the past). It was assumed that Luongo would achieve better statistics than in the past, backstopping a more successful team compared to the Panthers, who had never made the playoffs in Luongo's tenure with them. He would, in fact, set career highs in wins and goals-against-average, as well as the second highest save percentage of his career.

Incidentally, the 2007 postseason was Luongo's first playoffs of his career; in his first game, he almost set an NHL record for most saves in a game with 72, en route to a 5-4 quadruple overtime victory over the . He was just one save shy of tying the mark set by and of 73. Luongo would go on to win his first playoff series in seven games, but would lose to the eventual champions, the in the second round. Game 5 of the series with Anaheim saw Luongo come close to his previous 72-save performance, stopping 60 of 62 in a losing effort, in which Vancouver was eliminated. Oddly, Luongo had missed the first three minutes of the first overtime, to what was first believed to be an equipment malfunction. However, after the series had ended, it was revealed that Luongo, instead, had an untimely case of diarrhea.

Shortly after the end of the post-season, Luongo was up for three major NHL awards, the Vezina, Pearson and Hart. However, Luongo finished second in voting for all three awards, behind Brodeur for the Vezina and for the Hart and Pearson.

After a season of great accomplishments, 2007-08 paled somewhat in comparison. For the most part of his second campaign with the Canucks, Luongo kept pace with his previous season's work and continued to set impressive statistics, most significantly, a three-game shutout streak spanning 210:34 (a Canucks franchise record). [citeweb|title=Luongo's shutout streak ends in loss to Wild|url=http://www.globesports.com/servlet/story/RTGAM.20071202.wspt-canucks-wild02/GSStory/GlobeSportsHockey/home|publisher=Globe and Mail|year=2008|accessdate=2008-04-18] Also, although he did not attend in order to be with his pregnant wife, he was voted in as the 's Western Conference starting goalie for the second consecutive season. However, in Luongo's last eight games, crucial to the Canucks' playoff hopes, he went 1-7 and allowed an uncharacteristic 25 goals in that span. The Canucks, who at several points in the season had the division lead, would end up missing the playoffs.

On September 30, 2008, prior to the start of the 2008–09 season, Vancouver Canucks GM Mike Gillis and coach Alain Vigneault announced that Luongo was named team captain. Replacing the departed , Luongo became the 12th captain in team history and the first goaltender in NHL history to be appointed captaincy (sixth overall) since captained the in 1947–48. Due to league policy, he will not, however, be physically wearing the "C" on his jersey, instead opting to "wear" it on the front of his mask. [cite web|url=http://tsn.ca/nhl/story/?id=251272&lid=headline&lpos=topStory_nhl|title=Canucks name goaltender Luongo captain|publisher=TSN|date=2008-09-30|accessdate=2008-09-30] Canucks defenseman will handle communications with on-ice officials, and defenseman will handle ceremonial faceoffs and other such formalities that come with being captain.

Roberto Luongo was born to Pasqualina and Antonio in , . His father is an Italian immigrant, and his mother is of Irish descent. Luongo grew up in , a borough of Montreal known as Little Italy. Luongo speaks fluent English, French and Italian. Luongo began playing hockey at the age of eight, first as a forward before switching to goaltender. He also played before committing to hockey full time. His younger brothers, Leo and Fabio, are also goaltenders. Hall of Famer, has been cited as his inspiration growing up.

Internationally, Luongo has represented Canada on numerous occasions. During his major junior career, Luongo played for Team Canada at the 1998 and 1999 World Junior Championships, winning silver, as well as Best Goaltender and All-Star Team honours in 1999. At the senior level, he has played in four World Championships, winning two gold medals and one silver. In 2004, Luongo competed for Team Canada in the World Cup of Hockey as 's backup, earning gold. Two years later, at the in , he again played behind Brodeur. However, unlike the previous time, the team failed to win any medals and finished seventh.