Michael Thomas Modano, Jr. (pronounced /mɵˈdɑːnoʊ/; born June 7, 1970) is a retired American professional ice hockey player, who most notably played for the Minnesota North Stars/Dallas Stars franchise. He is the all-time goal-scoring and points leader amongst American-born players in the NHL, as well as the last active player in the NHL who played for the North Stars when the team was in Minnesota. Modano was drafted first overall by the North Stars in 1988. On September 21, 2011, Mike Modano announced that he would be retiring after 21 NHL seasons. The next day, Modano signed an honorary one-day contract with Dallas, allowing him to retire as a member of the Stars.

The North Stars selected Modano as the first overall draft pick in the 1988 NHL Entry Draft at the age of 18, an honor shared by only five other Americans: Brian Lawton (1983), Bryan Berard (1995), Rick DiPietro (2000), Erik Johnson (2006), and Patrick Kane (2007). After playing one more season with the Prince Albert Raiders, Modano joined the North Stars for the 1989-90 season and scored his first career NHL goal against Glenn Healy of the New York Islanders.

Modano won the Stanley Cup in 1999 with the Dallas Stars, putting together consecutive seasons of over twenty playoff points in 1999 and 2000. He has also played in the 1991 and 2000 Stanley Cup Finals. Modano has also been a finalist for the Calder Memorial Trophy (1990), the Frank J. Selke Trophy (2001), and the Lady Byng Trophy (2003). He controversially lost the Calder Memorial Trophy, awarded to the year's best rookie, to 31-year-old Sergei Makarov, who had already played professionally in the Soviet Championship League for over 12 years; this led to an age barrier of 26 for Calder candidates the following year to the present day.

Modano's best statistical seasons were in 1992–93 and 1993–94, as he scored 93 points in each of those seasons. During the latter campaign, the franchise's first in Dallas, Modano recorded a personal-best 50 goals. Later in Modano's career, Ken Hitchcock took over as Dallas' coach and installed a defensive-minded system; as a result, Modano tallied just 78 points per season from 1996–2002, but was also one of the NHL's top forwards by plus/minus over that span (his +43 in 1997 was second only to John LeClair's +44 mark). Modano's career high for points in a game is six (2–4–6) against the Anaheim Ducks, and he has seven career hat tricks. His only career fight was against Rod Brind'Amour.

The long-time face of the Dallas franchise, he has recorded over 1,000 NHL points and became the captain of the Stars in 2003. During the 2005 offseason, Modano contemplated signing with the Boston Bruins, but he decided to stay with the Stars after owner Tom Hicks got involved. Modano would sign a five-year contract extension with Dallas on August 5, 2005. On September 29, 2006, Brenden Morrow replaced him as the Stars' captain; Modano served an alternate captain from that time until 2010, a role in which he had previously served from 1995 to 2003.

Modano scored his 500th career regular-season goal on March 13, 2007, with 10:24 left in the 3rd period in a regulation win against Antero Niittymäki of the Philadelphia Flyers with assists by Antti Miettinen and Jon Klemm. He is only the 14th goal scorer to score 500 goals with a single team and the 39th player to reach 500 goals overall. 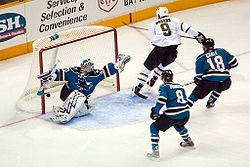 On March 17, 2007, in an away game versus the Nashville Predators, Modano scored his 502nd and 503rd career regular-season goals in a 3–2 loss, thus passing Joe Mullen's NHL record (502) for most goals scored by an American-born player.

Modano also holds the NHL all-time record for most points scored by a U.S. born player. He broke the record, which previously belonged to Phil Housley, on November 7, 2007, by scoring two goals in the first five minutes, with the record-breaker being a short-handed goal on a breakaway, against the San Jose Sharks. That night, amongst his congratulatory phone calls was one from Air Force One, U.S. President George W. Bush spoke to him for a few minutes about the record.

November 21, 2007, was "Mike Modano Tribute Night" at American Airlines Center, where Modano was honored by the franchise for his achievements in U.S. hockey. Those who spoke in the pre-game ceremony included Brett Hull, Joe Mullen, Phil Housley, and Stars owner Tom Hicks. Capping off an emotional night, Modano later went on to score the game-tying goal, as well as a shootout goal in a 3-2 Stars victory against the Anaheim Ducks.

With his production declining from 2007–2010, Modano played out the duration of his contract, which expired after the 2009–10 season. In the final game of that season (coincidentally played in Minnesota, where Modano began his pro career), Modano was saluted with a video tribute and a standing ovation, and named the game's first star, skating around the ice wearing a Minnesota North Stars jersey. 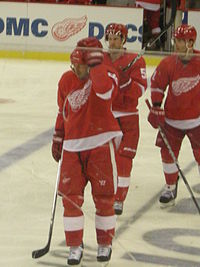 Mike Modano with the Red Wings in October 2010.

On June 29, 2010, the Stars announced that Modano would not be re-signed to a contract for the 2010-11 season.[1] After contemplating retirement or signing with the Detroit Red Wings (in his home state) or with the Minnesota Wild (in the state where he began his NHL career),[2] Modano signed a one-year contract with the Red Wings.[3][4][5] Coach Mike Babcock expressed a desire for Modano to center Detroit's third line with Dan Cleary and Jiří Hudler.[6]

At 5:35 of the first period of Detroit's 2010-11 home opener, on just his second shift, Modano took a pass from Cleary and beat Anaheim goaltender Jonas Hiller for his first goal as a Red Wing. [7]

On September 23rd, 2011, after 21 seasons in the NHL, Modano officially announced his retirement from hockey at a press conference in Dallas.[8] Modano was the last active player to have played in the 1980's, along with Mark Recchi, as well as the last active player to have played for the Minnesota North Stars. The Stars signed Modano to a short one-day contract to allow Modano to retire with the Stars, the team which he played for in 16 of his 21 NHL seasons.[9]

On November 30, 2006, singer/songwriter Willa Ford announced that Modano, her long-time boyfriend, had proposed to her during the weekend of Thanksgiving, 2006.[10] Modano and Ford were married in a small ceremony in Athens, Texas, on August 25, 2007, where Brett Hull and Darryl Sydor attended as Modano's co-best men.[11][12] Ford was asked by the NHL to blog the Stars' 2007 playoff series; her posts were well-received, and her support of her husband quite vocal.[13]

Modano is the founder and current Vice President of the Mike Modano Foundation, Inc., which raises awareness and funding for organizations offering education and assistance to children and families affected by child abuse. Moreover, since the start of his NHL career, Modano has affiliated many times with both charitable organizations and the Texas community in general. He has also had his own clothing line during the 1990s.

On January 21, 2007, the NHL announced Modano as the Special Ambassador to the 2007 NHL All-Star Celebration, thanks to his numerous contributions towards bringing the 55th National Hockey League All-Star Game to Dallas and also for his contributions to Dallas hockey as a whole. Modano, the Stars' all-time leader in several statistical categories and a member of the franchise for the entirety of his 17-year career, appeared at selected All-Star events and dropped the puck in a ceremonial face-off prior the game on January 24, 2007.

Modano made a brief cameo appearance alongside then-teammate Basil McRae in the 1992 film The Mighty Ducks. He only had two lines in the movie, in which he said to Emilio Estevez: "I heard you were a farmer" and "take it easy." Nonetheless, Modano still received a membership voucher to the Screen Actors Guild for the role.

Modano is an avid golfer. On Mike Modano Tribute Night, both the Dallas Stars and Anaheim Ducks organizations presented him with golf packages, one of which was for the course at The Royal and Ancient Golf Club of St Andrews in Scotland. His golf partner is often former Stars teammate Brett Hull.

In 2008, Hull and Modano founded Hully & Mo Restaurant and Tap Room in Dallas.

Played for the United States in: