Gold Country (also Mother Lode Country) is a region in the central and northeastern part of California, United States. It is famed for the mineral deposits and gold mines that attracted waves of immigrants, known as the 49ers, during the 1849 California Gold Rush. 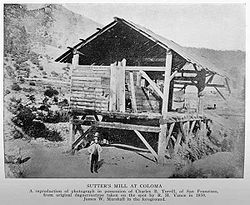 The Gold Country lies on the western slope of the Sierra Nevada, reaching down to the Sacramento Valley. The oldest geology can be found along the easternmost portions of this region, closer to the Sierra Nevada summits. It consists of ancient sea floor and portions of islands which were added onto the western edge of North America during the late Paleozoic, about 275 million years ago. The western sections of the Mother Lode are significantly younger, from the mid Mesozoic about 150 million years ago, and also consist of material that was solidified on the ocean floor to the continental edge. Massive intrusions of granite forced their way into these formations. After ten miles of overlying material was eroded over the last 70 million years, these intrusions became visible throughout the Sierra Nevada. Over the last 50 million years, rivers and volcanoes deposited materials; these built up in thick layers found atop many of the high ridges of the Sierra Nevada foothills.

For the most part, the climate in this part of California resembles that of much of Italy or Spain, making wine grapes and vineyards one of the region's primary crops and industry. Over 100 wineries are found throughout the Gold Country. Winters are cool and damp, averaging around 30 inches of rainfall and occasional snowfall, especially in the higher elevations of the eastern reaches up the slopes of the Sierra Nevada mountains. Winter temperatures range from the upper twenties to mid fifties. Summers are dry and hot, with long stretches that reach triple digits. This region has very short periods of autumn and spring.