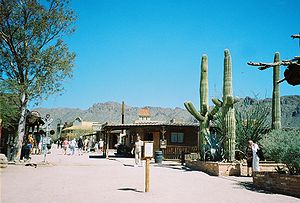 Main street, viewed from the entrance

Old Tucson Studios is a movie studio and theme park just west of Tucson, Arizona, adjacent to the Tucson Mountains and close to the western portion of Saguaro National Park. Built in 1939 for the movie Arizona, it has been used for the filming of several movies and television westerns since then, such as Little House on the Prairie. Opened to the public in 1960, historical tours are offered about the movies filmed there, along with live cast entertainment featuring stunt shows and shootouts.

Old Tucson Studios was originally built in 1938 by Columbia Pictures on a Pima County-owned site as a replica of 1860s Tucson for the movie Arizona, starring William Holden and Jean Arthur. Workers built more than 50 buildings in 40 days. Many of those structures are still standing.

After Arizona completed filming, the location lay dormant for several years, until the filming of The Bells of St. Mary's (1945), starring Bing Crosby and Ingrid Bergman. Other early movies filmed on this set included The Last Round-Up (1947) with Gene Autry and Winchester '73 (1950) with James Stewart and The Last Outpost with Ronald Reagan. The 1950s saw the filming of Gunfight at the O.K. Corral (1957), The Lone Ranger and the Lost City of Gold (1967), and Cimarron (1959) among others.

Open to the public 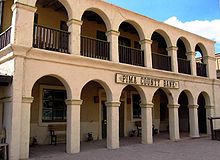 In 1959, entrepreneur Robert Shelton leased the property from Pima County and began to restore the aging facility. Old Tucson Studios re-opened in 1960, as both a film studio and a theme park. The park grew building by building with each movie filmed on its dusty streets. John Wayne starred in four movies at Old Tucson Studios. Rio Bravo (1959) added a saloon, bank building and doctor's office; McLintock! (1963) added the McLintock Hotel; El Dorado (1966) brought a renovation of the storefronts on Front Street; and with Rio Lobo (1970) came a cantina, a granite-lined creek, a jail and a ranch house.

In 1968, a 13,000 square foot (1,208 square meter) soundstage was built to give Old Tucson Studios greater movie-making versatility. The first film to use the soundstage was Young Billy Young (1968), starring Robert Mitchum and Angie Dickinson.

The park also began adding tours, rides and shows for the entertainment of visitors, most notably gunfights staged in the "streets" by stunt performers.

Old Tucson served as an ideal location for shooting scenes for TV series like NBC's The High Chaparral (1967–1971) where the ranch house survived the 1995 fire: Little House on the Prairie, and later Father Murphy, featuring Merlin Olsen and "Petrocelli". Three Amigos was a popular comedy shot there in the 80s, utilizing the church set. From 1989 to 1992 the show The Young Riders filmed here and at the Mescal sister site. The main street appears prominently in 1990s westerns such as Tombstone and The Quick and the Dead. A partial mirror set exists at Mescal, AZ and featured in scenes particularly used for Tombstone.

The origin of the fire is still not known. Most suspect that arson was the cause, however, several factors contributed to the degree of devastation. Fire control efforts were hampered by high winds. Most of the buildings in the studio were classified as "Temporary Structures," meaning fire prevention devices such as sprinklers were not required. Liquid propane and gunpowder stored near the fire area demanded the attention of firefighters and much of the scarce water supply. So much water was used in the attempt to prevent an explosion that the surrounding areas became flooded, further impeding the firefighters as they attempted to wade through the mud.

When the fire began, 300 guests and employees were forced to evacuate the park. After approximately four hours, the flames were finally extinguished. Damages were estimated to be in excess of $10 million, with 25 buildings destroyed including the sound stage. Among the memorabilia destroyed was the wardrobe from Little House on the Prairie.

After 20 months of reconstruction, Old Tucson re-opened its doors on January 2, 1997. The sets that were lost were not recreated; instead, entirely new buildings were constructed, and the streets were widened. The soundstage was not rebuilt. In 2003, Old Tucson reduced its hours of operation, opening from 10am to 4pm. Focusing on seasonal events, Old Tucson hosts the popular Nightfall event for Halloween which runs through the month of October, Wednesday through Sunday nights. 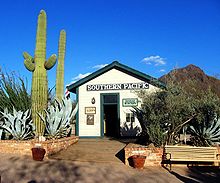 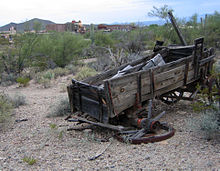 Many films, not all of them Westerns, were shot at Old Tucson Studios, either in whole or in part:[1][2]

Some scenes from the 1994 arcade game Lethal Enforcers II: Gunfighters from Konami were also shot at Old Tucson Studios along with Fast Draw Showdown and Shootout at Old Tucson by American Laser Games.