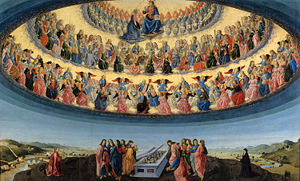 The Assumption of the Virgin by Francesco Botticini at the National Gallery London, shows three hierarchies and nine orders of angels, each with different characteristics 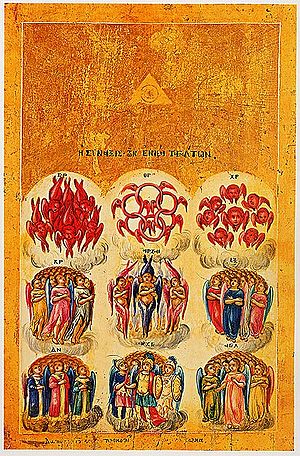 For other angelic hierarchies, see Hierarchy of angels.

The most influential Christian angelic hierarchy was that put forward by Pseudo-Dionysius the Areopagite in the 4th or 5th century in his book De Coelesti Hierarchia (The Celestial Hierarchy). During the Middle Ages, many schemes were proposed, some drawing on and expanding on Pseudo-Dionysius, others suggesting completely different classifications. According to medieval Christian theologians, the angels are organized into several orders, or "Angelic Choirs".[1][2]

Pseudo-Dionysius (The Celestial Hierarchy) and Thomas Aquinas (Summa Theologica) drew on passages from the New Testament, specifically Ephesians 1:21 and Colossians 1:16, in an attempt to develop a schema of three Hierarchies, Spheres or Triads of angels, with each Hierarchy containing three Orders or Choirs. 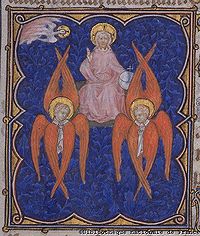 Seraphim (singular "Seraph"), mentioned in Isaiah 6:1-7,[3] serve as the caretakers of God's throne and continuously shout praises: "Holy, holy, holy is the Lord of hosts. All the earth is filled with His Glory." The name Seraphim means "the burning ones." The Seraphim have six wings.

Two of the Seraphim are named Seraphiel and Metatron, according to some books. Seraphiel is said to have the head of an eagle. It is said that such a bright light emanates from them that nothing, not even other angelic beings, can look upon them. It is also said that there are four of them surrounding God's throne, where they burn eternally from love and zeal for God.[citation needed] 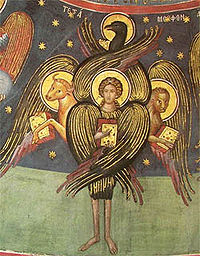 A cherub, as described by Ezekiel and according to traditional Christian iconography.
Main article: Cherub

Cherubim have four faces: one of each a man, an ox, a lion, and a griffon vulture. They have four conjoined wings covered with eyes, a lion's body figure, and they have ox's feet. Cherubim guard the way to the tree of life in the Garden of Eden (Genesis 3:24)[4] and the throne of God (Ezekiel 28:14-16).[5]

Modern English usage has blurred the distinction between cherubim and putti. Putti are the winged human baby/toddler-like beings traditionally used in figurative art.

St. Thomas Aquinas theorized that Satan is a fallen Cherub.[8] 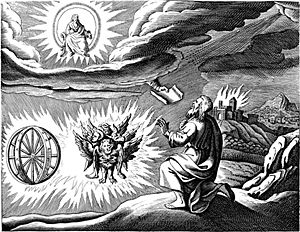 One traditional depiction of the chariot vision, based on the description in Ezekiel.
Main articles: Thrones and Ophan

The "Thrones" (Gr. thronos) or Elders, also known as the Erelim or Ophanim, are a class of celestial beings mentioned by Paul of Tarsus in Colossians 1:16 (New Testament). They are living symbols of God's justice and authority, and have as one of their symbols the throne. These high celestial beings appear to be mentioned again in Revelation 11:16.

The Ophanim (Heb. ofanim: Wheels, also known as Thrones, from the vision of Daniel 7:9) are unusual looking even compared to the other celestial beings; They appear as a beryl-coloured wheel-within-a-wheel, their rims covered with hundreds of eyes.

They are closely connected with the Cherubim: "When they moved, the others moved; when they stopped, the others stopped; and when they rose from the earth, the wheels rose along with them; for the spirit of the living creatures [Cherubim] was in the wheels." Ezekiel 10:17 NRSV.

Angels of the Second Sphere work as heavenly governors.

The "Dominions" (lat. dominatio, plural dominationes, also translated from the Greek term kyriotites as "Lordships") are presented as the hierarchy of celestial beings "Lordships" in the De Coelesti Hierarchia. The Dominions, also known as the Hashmallim, regulate the duties of lower angels. It is only with extreme rarity that the angelic lords make themselves physically known to humans. They are also the angels who preside over nations.

The Dominions are believed to look like divinely beautiful humans with a pair of feathered wings, much like the common representation of angels, but they may be distinguished from other groups by wielding orbs of light fastened to the heads of their scepters or on the pommel of their swords.

The "Virtues" or "Strongholds" lie beyond the ophanim (Thrones/Wheels). Their primary duty is to supervise the movements of the heavenly bodies in order to ensure that the cosmos remains in order.

The term appears to be linked to the attribute "might", from the Greek root "δύναμις" in Ephesians 1:21, which is also translated as "Virtue". They are presented as the celestial Choir "Virtues", in the Summa Theologica. Traditional theological conceptions of the Virtues might appear to describe the same Order called the Thrones (Gr. thronos), (in which case the Ophanim may not be the same thing as "Thrones").

"The name of the holy Virtues signifies a certain powerful and unshakable virility welling forth into all their Godlike energies; not being weak and feeble for any reception of the divine Illuminations granted to it; mounting upwards in fullness of power to an assimilation with God; never falling away from the Divine Life through its own weakness, but ascending unwaveringly to the superessential Virtue which is the Source of virtue: fashioning itself, as far as it may, in virtue; perfectly turned towards the Source of virtue, and flowing forth providentially to those below it, abundantly filling them with virtue."[9]

The "Powers" (lat. potestas (f), pl. potestates), or "Authorities", from the Greek exousies, (see Greek root in Eph 3:10) appear to collaborate, in power and authority, with the Principalities (Rulers).

The Powers are the bearers of conscience and the keepers of history. They are also the warrior angels created to be completely loyal to God. Some believe that no Power has ever fallen from grace, but another theory states that Satan was the Chief of the Powers before he Fell (see also Ephesians 6:12). Their duty is to oversee the distribution of power among humankind, hence their name.

Angels who function as heavenly messengers and soldiers.

The "Principalities" (lat. principatus, pl. principatūs) also translated as "Princedoms" and "Rulers", from the Greek arche (see Greek root in Eph 3:10), appear to collaborate, in power and authority with the Powers (Authorities).

The Principalities are shown wearing a crown and carrying a sceptre. Their duty also is said to be to carry out the orders given to them by the Dominions and bequeath blessings to the material world. Their task is to oversee groups of people. They are the educators and guardians of the realm of earth. Like beings related to the world of the germinal ideas, they are said to inspire living things to many things such as art or science. 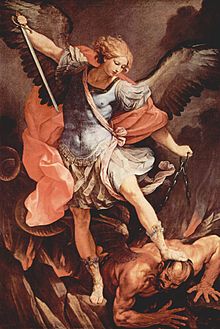 The word "archangel" comes from the Greek αρχάγγελος (archangělǒs), meaning chief angel, a translation of the Hebrew רב־מלאך (rav-mal'ákh) [10] It derives from the Greek archō, meaning to be first in rank or power; and aggělǒs which means messenger. The word is only used twice in the New Testament: 1 Thessalonians 4:16 and Jude 1:9. Only Archangels Gabriel and Michael are mentioned by name in the New Testament.

Michael is the only angel the Bible named expressly as "the" archangel. In the Book of Daniel he is referred to as "one of the chief princes". The word "prince" here is the ancient Hebrew word sar, which means: "a head person (of any rank or class), a chief, a general etc."[10]

In most Christian traditions Gabriel is also considered an archangel, but there is no direct literal support for this assumption.

The name of the archangel Raphael appears only in the Book of Tobit (Tobias). Tobit is considered Deuterocanonical by Roman Catholics (both Eastern and Western Rites) and Eastern Orthodox Christians. The Book of Tobit is also read by Anglicans and Lutherans, but not by Reformed Christians or Baptists. Raphael said to Tobias that he was "one of the seven who stand before the Lord", and it is generally believed that Michael and Gabriel are two of the other six.

A fourth Archangel is Uriel whose name literally means "Fire of God" or "Light of God." Uriel's name is the only one not mentioned in the Lutheran Bible, but plays, however, a prominent role in an apocryphon read by Anglican and Russian Orthodox Christians: The second Book of Esdras (fourth Books of Esdras in the Latin Vulgate). In the book he unveils seven prophecies to the prophet Ezra, after whom the book is named. He also plays a role in the apocryphal Book of Enoch, which is considered canonical only by the Ethiopian Orthodox Church.

The Seven Archangels are said to be the guardian angels of nations and countries, and are concerned with the issues and events surrounding these, including politics, military matters, commerce and trade: e.g. Archangel Michael is traditionally seen as the protector of Israel and of the ecclesia (Gr. root ekklesia from the New Testament passages), theologically equated as the Church, the forerunner of the spiritual New Israel.

It is possible to make a distinction between archangel (with a lower-case a) and Archangel (with an uppercase A). The former can denote the second-lowest choir (arch-angels in the sense of being just above the lowest Choir of angels that is called only "angels") but the latter may denote the highest of all the angels (i.e., Arch-angels in the sense of being above all angels, of any Choir. The seven highest Seraphim, Michael being the highest of all, once Satan fell).

The "angels", (malakhim Greek angělǒs) messengers, are the lowest order of the angels, and the most recognized. They are the ones most concerned with the affairs of living things. Within the category of the angels, there are many different kinds, with different functions. The angels are sent as messengers to mankind. 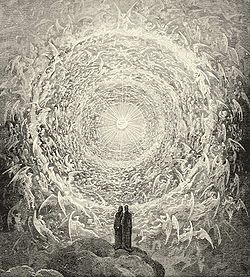 The angelic choirs circling the abode of God, from Dante's Paradiso, illustrated by Gustave Doré.

During the Middle Ages, many schemes were proposed, some drawing on and expanding on Pseudo-Dionysius, others suggesting completely different classifications (some authors limited the number of Choirs to seven). Several other hierarchies were proposed, some in nearly inverted order. Some of those schemes are here presented: