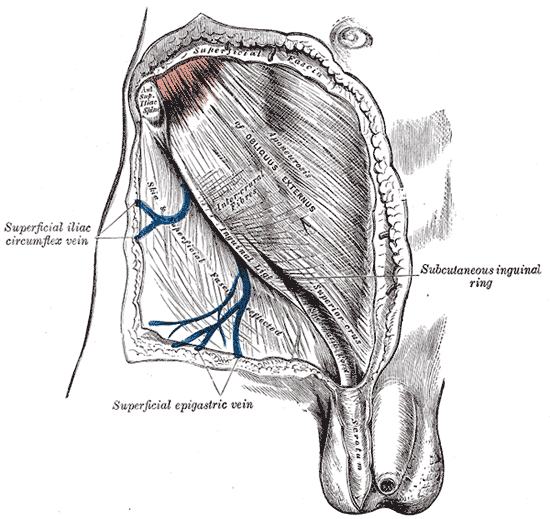 
Caption2 =
System =
Precursor =
MeshName =
MeshNumber =
DorlandsPre =
DorlandsSuf =
The superficial layer (fascia of Camper) is a thick superficial layer of the anterior abdominal wall [ [http://cancerweb.ncl.ac.uk/cgi-bin/omd?Camper's+fascia Cancerweb] ] . It is areolar in texture, and contains in its meshes a varying quantity of . It is found "superficial" to .

Below, it passes over the , and is continuous with the superficial fascia of the thigh.

In the male, Camper’s fascia is continued over the and outer surface of the to the , although it is not named there. Dartos fascia is formed from Scarpa's fascia.

As it passes to the scrotum it changes its characteristics, becoming thin, destitute of adipose tissue, and of a pale reddish color, and in the scrotum it acquires some involuntary muscular fibers.

From the scrotum it may be traced backward into continuity with the superficial fascia of the .

In the female, Camper’s fascia is continued from the abdomen into the .